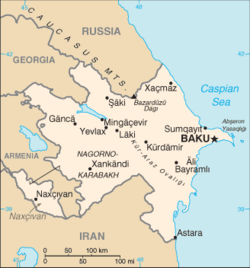 This is a list of airports in Azerbaijan, grouped by type and sorted by location.

A$40 million project to lengthen the main runway at Ganja Airport has been completed, allowing the first international direct connections to the city. Similar projects are underway at Lenkoran and Zaqatala and due for completion in 2007.[1][2]