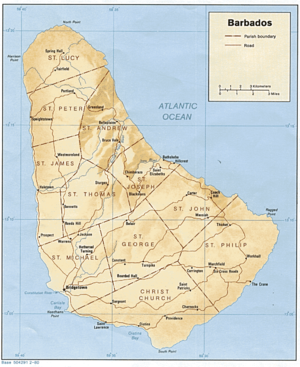 Barbados, situated just east of the Caribbean Sea, is a West Indian continental island-nation in the western Atlantic Ocean. It is considered a part of the Lesser Antilles. Its closest island neighbours are Martinique, Saint Lucia and Saint Vincent and the Grenadines to the west. To the south lies Trinidad and Tobago with which Barbados now shares a fixed official maritime boundary and also the South American mainland. Bridgetown is the capital and largest city in Barbados.