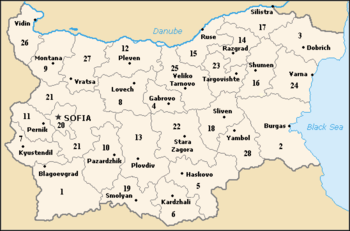 This is a list of airports in Bulgaria. It is a partial list of public active aerodromes (airports and airfields), grouped by type and sorted by location.

The Republic of Bulgaria is a country in the Balkans in southeastern Europe. It borders five other countries: Romania to the north (mostly along the River Danube), Serbia and the Republic of Macedonia to the west, and Greece and Turkey to the south. The Black Sea defines the extent of the country to the east. The country's capital city is Sofia. Bulgaria is divided into 28 provinces which are subdivided into 260 municipalities.

Bulgarian airports with number of passengers served in 2014 & 2015:[citation needed]