This is a list of airports in Germany, sorted by location.

Germany, officially the Federal Republic of Germany, is a country in Central and Northern Europe. It is bordered to the north by the North Sea, Denmark, and the Baltic Sea; to the east by Poland and the Czech Republic; to the south by Austria and Switzerland; and to the west by France, Luxembourg, Belgium, and the Netherlands.

Germany is a federal republic consisting of sixteen states. The capital city of Germany is Berlin. 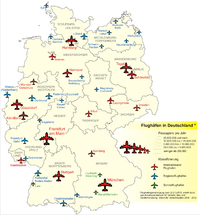 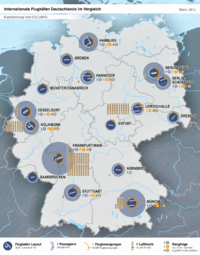 Map of airports in Germany and comparison of international airports

Airport names shown in bold indicate the facility has scheduled passenger service on a commercial airline.