From Infogalactic: the planetary knowledge core
(Redirected from List of airports in Guernsey)
Jump to: navigation, search 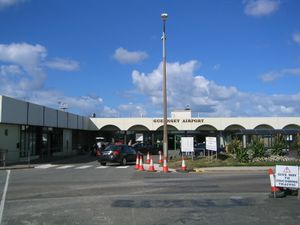 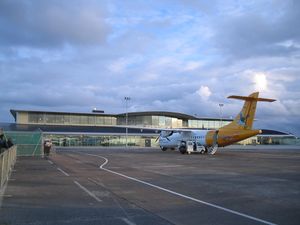 Guernsey Airport (IATA: GCI, ICAO: EGJB) is the largest airport in the Bailiwick of Guernsey and is the only airport on the island of Guernsey. It is located in the Forest, a parish in Guernsey, 2.5 nautical miles (4.6 km; 2.9 mi) west southwest of St. Peter Port.[1]

The airport was officially opened on 5 May 1939. However, regular air services only commenced in October 1946. By 1948, BEA were operating a daily service to Southampton using Douglas DC-3 aircraft. From 1951, Jersey Airlines flew BEA associate scheduled services to Southampton at weekends using Rapide eight-seat biplane airliners.[3]

In 1960 there were four grass runways, with lengths ranging from 2,040 ft (622 m) to 3,060 ft (933 m). 1960 also saw the construction of a new tarmacked runway of a length of 4,800 ft (1,463 m). In early 2000s alongside the work on the new terminal, the States of Guernsey Commerce and Employment department claimed an extension was necessary to allow use of larger aircraft such as the Boeing 737 Classic or Airbus A320 family for trans-European flights. In 2012, a set of four two-day closures under the Airport 2040 programme allowed contractors for the States of Guernsey to resurface the existing runway, extend runway end safety areas and also reconstruct parts of the concrete apron areas. Taxiways which connect the aprons to the runway were also resurfaced and realigned, whilst a new drainage system was implemented. New airfield ground lighting and navigational aids were also installed.[4]

During the first decade of this century, two airlines competed on the most heavily-used route from Guernsey, that to London Gatwick. During this period, Aurigny Air Services operated ATR 72 turboprop aircraft (74 seats) and flybe operated BAe 146 jet aircraft (70 to 128 passengers depending on variant). When in 2008 flybe disposed of their BAe 146 fleet, they initially replaced them with Embraer E195 jet aircraft which could not at that time operate into Guernsey because of the then low strength of the runway. They therefore elected to operate the smaller Bombardier Dash 8 aircraft. Business leaders and deputies (elected members of the island parliament, the States of Guernsey) argued for and against an extension of the runway from its current length of 1463m (4,800 ft). Following several years of debate it was announced on 2 October 2009 that Guernsey’s airport runway and apron would be extensively rebuilt at a then estimated cost of £81 million. Although Guernsey is largely autonomous, it has to obey the United Kingdom Civil Aviation Authority regulations. The CAA insisted that extended runway end safety areas (RESAs) be introduced and that the then-existing hump in the runway be removed. The physical runway length was therefore to be increased by 120m at the western end. However, this extension is designated as an RESA. The significance of having only a 1463m runway is that even relatively small commercial jet aircraft in the Airbus A320 family or Boeing 737 Classic families cannot operate from Guernsey at maximum take-off weight; more recent and larger Boeing 737 Next Generation aircraft cannot effectively operate from Guernsey at all.

Sufficient progress on the rebuilding works had taken place to enable flybe to introduce an Embraer E175 jet (88 seats) on their then-existing Gatwick service from 31 March 2013. However, flybe then decided to dispose of their landing slots at London Gatwick and these were sold to EasyJet.[8] EasyJet made a decision not to operate their Airbus A319 aircraft into Guernsey,[9] leaving a reduction of four rotations per day between Guernsey and Gatwick.

The runway and apron rebuilding operations were completed during 2014. The States-owned Aurigny ordered an Embraer E195 which entered service during 2014; this 122 seater aircraft operates four rotations each day between Guernsey and Gatwick and these are supplemented by up to 2 ATR 72 rotations. By this means the loss of passenger capacity between Guernsey and Gatwick occasioned by the flybe withdrawal has been much reduced.

A small number of proponents continue to argue that the runway should be extended to 1700m to permit more profitable operation of the Airbus A320 family or Boeing 737 Classic family aircraft, as in the neighbouring island of Jersey.[10]

Some airlines offer services between Guernsey and other destinations with an intermediate stop at Jersey. There are also periodic charter flights to European holiday destinations.

Atlantic Airlines operates from Bournemouth carrying mail, and from London Luton bringing in newspapers and DHL parcels. They also bring in general freight from Coventry. Aurigny Air Services carries some other post and also parcels on behalf of carriers including FedEx and UPS.

A large number of single and twin-engined light and business aircraft are based at the airport. These, and numerous visiting general aviation aircraft, are serviced by aviation engineering firms located in several hangars located at the southwest and southeast portions of the airport.

The airport currently runs two liaison groups; one for commercial airport users and one for airport neighbours. In 2002, an overturned firetruck discharged PFOS fire retardant onto the airport apron and surrounding soil. PFOS was added to Annex B of the Stockholm Convention on Persistent Organic Pollutants in May 2009 and has been shown to cause chronic kidney disease amongst people and animals exposed to larger quantities. Traces of spilt PFOS later entered the island's water supply although quantities were not high enough to make it unsafe to drink. However, because the airport is at the highest point in the island the accident highlighted the vulnerability of the water supply to airport effluence and other water pollutants. Aerodrome works have subsequently involved environmental engineering projects to better contain and divert contaminated effluence away from the water supply. As part of the Airport 2040 development, a new drainage system is being installed and this will allow airport effluence to be contained in a manner which does not affect water supplies in the future.[4] Soil contaminated by PFOS in the firetruck incident is currently contained in a bund on the airport premises. Both this soil and soil polluted when containing the fire which broke out when F-27 G-CHNL crashed (see Accidents and incidents) will need to be moved in the future.[15]

Main article: List of aviation accidents and incidents in the Channel Islands

On 7 December 1997 an F-27 (registration: G-BNCY) operated by AirUK arriving from Southampton overshot the runway while landing in high cross winds. The Fokker aircraft aquaplaned on standing water, left the runway end and slid on the wet grass. The aircraft nosed into the cross wind, ending up some 100 m (330 ft) off the centre line in a field to the south of the runway. There were no fatalities among the 50 passengers and 4 crew members, although the aircraft was damaged beyond repair and subsequently written off.[2].

On 12 January 1999 a F-27 (registration: G-CHNL) operating a cargo flight for Channel Express arriving from Luton crashed short of runway 27 after deploying full flap on approach. As the flap deployed, the cargo moved aft and exited the aeroplane's mass and balance limits, the flight crew initiated a go-around which further exacerbated problem by raising the gear and applying power. The aeroplane pitched up uncontrollably and stalled which resulted in the aircraft impacting the conservatory of a house located under the flight path. Fortunately no one on the ground was injured, however both flight crew were killed by the resulting fire which engulfed the aircraft. The investigation concluded the aeroplane was not loaded in accordance with the loadsheet. [3].