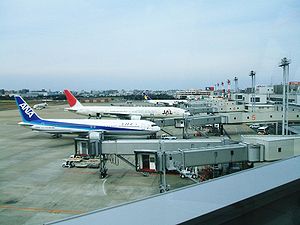 Aircraft at Terminal 3 of Fukuoka Airport

This is a list of airports in Japan, grouped by classification and sorted by location.

Japan is an island country in East Asia. Located in the Pacific Ocean, Japan lies to the east of China, North Korea, South Korea, Russia, and the Sea of Japan, stretching from the Sea of Okhotsk in the north to the East China Sea and Taiwan in the south. Japan is an archipelago of 6,852 islands. The four largest islands, accounting for 97% of the land area, are Honshū, Hokkaidō, Kyūshū and Shikoku. The capital of Japan is Tokyo. As of February 2012, Japan had 98 total airports, with 28 operated by the central government, and 67 by local governments.[1]

In Japan, airports serving civil aviation routes are governed by the Aeronautical Law for safety purposes, by the Noise Prevention Law for noise prevention purposes and by the Airport Development Law for economic development purposes.[2] The latter law groups such airports into four legal classifications:[3]

Some airports in Japan do not fall under the scope of the Japanese airport statutes. These include the three major U.S. military air bases in Japan (Kadena Air Base, MCAS Iwakuni and Yokota Air Base) and certain smaller aerodromes for firefighting, corporate or other special purposes.[2] In 2001, the Ministry of Agriculture, Forestry and Fisheries, which receives 20% of the public-works construction budget, commenced a scheme to build airfields predominantly for airlifting vegetables. Kasaoka Airfield was one of nine airfields constructed; however it was later determined that flying vegetables to Okayama from Kasaoka took just as long due to loading and unloading, and cost approximately six times as much as road transport.[citation needed]