From Infogalactic: the planetary knowledge core
(Redirected from List of airports in Jersey)
Jump to: navigation, search

File:Arms of Jersey States of Jersey Airport 1937.jpg
Arms and date on the original 1937 tower

Air service to Jersey before 1937 consisted of biplane airliners and some seaplanes landing on the beach at Saint Aubin bay. Jersey Airways and Imperial Airways were among those who operated to the island before the Second World War, but conditions were difficult as timetables were governed by tides. It was also difficult to prevent members of the public from walking across the landing area, and any aircraft which had mechanical problems had to be dragged up the slipways until the tide receded.

The States of Jersey decided to build an airport which opened on 10 March 1937 with four grass runways, the longest being 2,940 ft (896 m) with a concrete centreline. Concrete taxiways were added during the World War II occupation by the Luftwaffe – they also built hangars, one of which, the Jersey Airlines hangar, is still in existence although no longer used. A 4,200 ft (1,280 m) tarmac runway was opened in 1952 and the grass strips were closed. A feature of the airport in the 1950s was the traffic control system – traffic-lights were in place to prevent vehicles using the road from Les Quennevais to the Airport when planes were being moved to or from the hangar used by B.E.A.

The runway was lengthened several times over the years, reaching its current length of 5,560 ft (1706m) in 1976. The runway is 150 ft wide(46m). Additional taxiways were added several years later to improve access to the one end of the runway. However, due to its restricted length, in October 2007 Thomsonfly announced the removal of some services as it introduced the larger Boeing 737-800 to its fleet.[3] Designated 09/27 in 1952, the runway was redesignated 08/26 in October 2014 due to a shift in the earth's magnetic poles.[4]

There were approximately 5,000 aircraft movements and 1.5 million passengers annually at the airport based on 2014 statistics.[2]

Work was intended to begin late 2011 to demolish the original airport building, constructed in 1937 and which contains large quantities of asbestos but work was never undertaken as the building was nominated as a protected historical building. Eventually, on 17 March 2014 it was determined on grounds of aviation safety, that the old terminal building would have to be demolished.[5]

Jersey is part of the Common Travel Area, which means that there are limited identity card checks before boarding a flight to the UK or Ireland. There would be full passport check when travelling to or from other countries.

Some airlines offer services between Jersey and other destinations with an intermediate stop at Guernsey. There are also periodic charter flights to European holiday destinations.

Cargo flights, including daily mail and paper services, which are handled by OceanAir Express Logistics, are operated by Atlantic Airlines and RVL Aviation.

Apart from scheduled airline services, Jersey Airport accommodates a thriving general aviation population, including the Jersey Aero Club. It is also home to the Jersey International Air Display in September each year. Aviation Beauport Ltd is based at Jersey Airport and offers worldwide private charter flights. 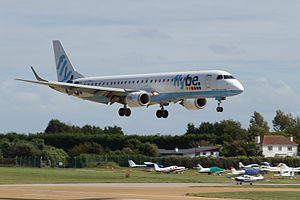 There are long and short-stay car parks located at the airport, and free parking areas for bicycles and motorcycles.[10]

There is a public taxi rank, and bus stop directly outside the arrivals hall. LibertyBus's route 15 connects with the main terminus, Liberation Station, in St Helier.[11]