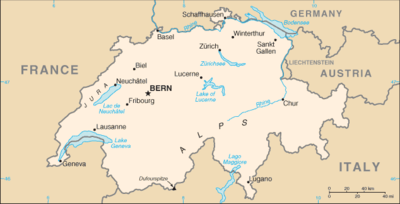 This is a list of airports in Switzerland, sorted by location.

Switzerland (German: Schweiz, French: Suisse, Italian: Svizzera), officially the Swiss Confederation (Confœderatio Helvetica in Latin, hence its ISO country codes CH and CHE), is a federal republic consisting of 26 cantons. The country is situated in Europe where it is bordered by Germany to the north, France to the west, Italy to the south, and Austria and Liechtenstein to the east. The capital city of Switzerland is Bern.