From Infogalactic: the planetary knowledge core
(Redirected from List of airports in the Isle of Man)
Jump to: navigation, search

Isle of Man Airport (IATA: IOM, ICAO: EGNS), also known as Ronaldsway Airport and, in Manx, Purt Aer Vannin, is the main civilian airport on the Isle of Man. It is located in the south of the island at Ronaldsway near Castletown, 6 nautical miles (11 km; 6.9 mi) southwest of Douglas,[1] the island's capital. Along with the Isle of Man Sea Terminal, it is one of the two main gateways to the island. The airport has scheduled services to the United Kingdom, Ireland and Jersey.

The airfield came under Royal Air Force control at the outbreak of the Second World War. Known as RAF Ronaldsway, it was one of the few airfields that continued operating civilian flights throughout the wartime period.

The airfield was used by № 1 GDGS (Ground Defence and Gunnery School) operating Westland Wallace aircraft, the drogues from these aircraft being fired on from gun emplacements on St Michael's Isle (Fort Island) and Santon Head. An expansion of the airport during the War led to the discovery of the archaeological remains of a Neolithic settlement belonging to what is now called the Ronaldsway culture, in honour of this site.

RAF operations continued until 1943 when the airfield was handed over to the Admiralty for further development as a Fleet Air Arm training station.

Now a naval air station, RNAS Ronaldsway, the airport was taken out of commission in 1943 for almost twelve months of extensive development undertaken by John Laing & Son.[4] By the summer of 1944 the airfield had evolved from a grass landing area with a few hangars to a four runway airfield with the infrastructure to house and operate three training squadrons using Barracuda torpedo bombers.

Commissioned as HMS Urley (Manx for Eagle) by the Admiralty on 21 June 1944, with accounts handled by HMS Valkyrie, flying recommenced on 15 July 1944.[5] The airfield's main role was that of a torpedo working-up station. No. 1 OTU consisted of 710, 713 and 747 Squadrons (Fleet Air Arm) and these operated until the cessation of hostilities in 1945. The base was paid off on 14 January 1946, and transferred to 'Care and Maintenance' under HMS Blackcap.[5] The nominal depot ship from 21 June 1944 was a 32' cutter named XXII, which itself was constructed in 1937.[5]

The airport reverted to solely civilian flying almost immediately after the war, but the airfield remained in Admiralty possession until sold to the Isle of Man Government for £200,000 in 1948, far short of the £1 million that the UK Government had spent on constructing the airport buildings and runways, plus the £105,000 that was paid by the Admiralty in 1943 to purchase the site.

Several Manx-based airlines were formed in the early postwar years to operate scheduled and charter services to the UK mainland. When Manx Airlines existed, its head office was on the airport property.[6]

Citywing has its head office in Hangar 9 at the airport.[7]

The Manx Military and Aviation Museum is situated next to the airport and has exhibits and information about the history of aviation on the island. 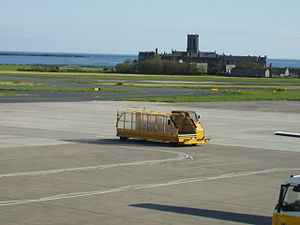 A baggage loading and transport vehicle drives on the ramp at Ronaldsway Airport. 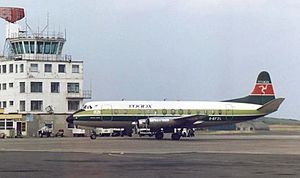 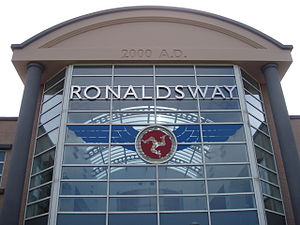 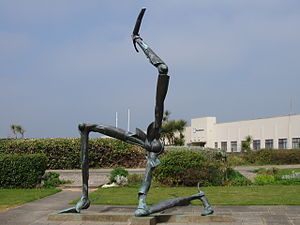 Sculpture by Bryan Kneale called "The Legs of Man" at the terminal entrance.

A project by Ellis Brown Architects began in November 1998 to extend the airport and improve the facilities available to passengers. In March 2000 the new extension was opened, providing a new landside catering outlet, arrivals area, baggage hall and departure lounge. The existing part of the airport was refurbished during this time to provide improved check-in facilities and offices, linked to the extension with a new airport entrance. During the extension and renovation period the iconic Three Legs of Man sculpture adorning the airport's façade was also refurbished.

In March 2006 funding for a further extension was granted by Tynwald to increase the number of departure gates, with work due for completion in summer 2007.

In April 2008 Tynwald granted a major runway extension and resurfacing project at the airport. The runway will be extended by 245 m (804 ft) out into the Irish Sea by the construction of a rock-armoured promontory. It is part of a £44m plan which will also include resurfacing of the runway during summer 2008 and the extension programme that will commence in spring 2008 and is due to be completed by December 2009. It has emerged[8] that the actual runway take-off length was underestimated by 160 metres in the £1.5 million feasibility study. Whilst the study originally looked into the aviation marketing implication of runway length, airport management have now denied that the extension is for the use of heavier aircraft in the future, stating that the resurfacing and extension are to comply with the latest international safety standards.[9] There has been a significant overspend on the project due to poor forex management of the Euro denominated components of the costs. It is thought that the Manx treasury minister may have been referring to the expense of the runway and the additional £6,515,000 control tower project[10] when he stated in his 2009 Budget speech that the Isle of Man could no longer afford "Rolls Royce" projects. 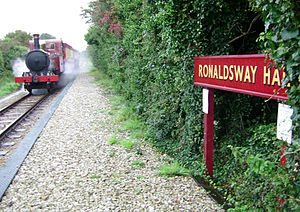 Ronaldsway railway halt with a train arriving from Douglas.

The Isle of Man Railway also stops at the nearby Ronaldsway request stop, making possible a unique opportunity in the British Isles to travel to or from an airport aboard a steam locomotive hauled regular passenger service.

In common with most international airports, the Isle of Man Airport maintains its own fire service. This service cooperates closely with the Isle of Man Fire and Rescue Service, although it is independent, with its own management and chief officer. For joint operational purposes, and for the assigning of radio call signs to appliances, the airport fire station is known as "station 9", in a common series with the IoM Fire & Rescue Service, whose seven fire stations are numbered from "station 1" to "station 7" inclusive. The airport fire station is a large five-bay purpose-built structure with duty rooms and offices. The service operates a fleet including two Carmichael Cobra 2 major foam tenders, a third (smaller) major foam tender, a standard duty pump (principally for building fires), and a 4x4 Land Rover. A further major appliance (Iturri Torro) is on order.

The Isle of Man Airport Police is a small independent police service providing security and policing at the airport site, with warranted constables, known as "aviation security officers" (ASO). Under Manx law ASOs have full police powers, including the power of arrest, whilst on airport property. For major crimes the airport police is supported by the Isle of Man Constabulary.

Media related to Isle of Man Airport at Wikimedia Commons