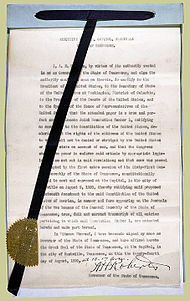 1920 Tennessee certificate of ratification of the 19th Amendment. Tennessee was the 36th state to ratify the amendment, that being the number of states required for full implementation.

This is the complete list of the thirty-three amendments to the United States Constitution which have been proposed by the United States Congress and sent to the states for ratification since the Constitution was put into operation on March 4, 1789. Twenty-seven of these, having been ratified by the requisite number of states, are part of the Constitution. The first ten amendments were adopted and ratified simultaneously and are known collectively as the Bill of Rights. Six amendments adopted by Congress and sent to the states have not been ratified by the required number of states. Four of these amendments are still technically open and pending, one is closed and has failed by its own terms, and one is closed and has failed by the terms of the resolution proposing it.

Approximately 11,539 proposals to amend the Constitution have been introduced in Congress since 1789.[1] Collectively, members of the House and Senate typically propose around 200 amendments during each two–year term of Congress.[2] Most however, never get out of the Congressional committees in which they were proposed, and only a fraction of those that do receive enough support to win Congressional approval to actually go through the constitutional ratification process.

The framers of the Constitution, recognizing the difference between regular legislation and constitutional matters, intended that it be difficult to change the Constitution; but not so difficult as to render it an inflexible instrument of government. The amending process they devised, codified in Article Five of the United States Constitution, has two steps. Amendments to the Constitution must be properly Proposed and Ratified before becoming operative.

An amendment may be proposed and sent to the states for ratification by either:

To become part of the Constitution, an amendment must be ratified by either (as determined by Congress):

Upon being properly ratified, an amendment becomes an operative addition to the Constitution.

There is a provision at the end of Article V shielding three clauses in the new frame of government from being amended. They are: Article I, Section 9, Clause 1, concerning the migration and importation of slaves; Article I, Section 9, Clause 4, concerning Congress' taxing power; and, Article I, Section 3, Clause 1, which provides for equal representation of the states in the Senate. These are the only textually entrenched provisions of the Constitution. The shield protecting the first two entrenched clauses was absolute but of limited duration; it was in force only until 1808. The shield protecting the third entrenched clause, though less absolute than that covering the others is practically permanent; it will be in force until there is unanimous agreement among the states favoring a change.

Beginning in the early 20th century, Congress has usually, but not always, stipulated that an amendment must be ratified by the required number of states within seven years from the date of its submission to the states in order to become part of the Constitution. Congress' authority to set ratification deadline was affirmed by the United States Supreme Court in Coleman v. Miller, 307 U.S. 433 (1939).

Synopsis of each ratified amendment

Summation of ratification data for each ratified amendment

Synopsis of each unratified amendment

Summation of ratification data for each unratified amendment