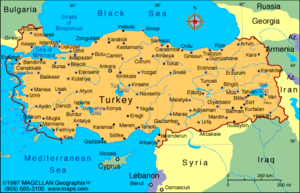 This is a list of cities in Turkey by population, which includes cities that are provincial capitals or have a population of at least 7,000. The total population of Turkey is 75,627,384 according to the 2012 estimate, making it the 17th most populated country in the world.

Cities with more than 7,000 inhabitants

Cities with a population of over 7,000 inhabitants according to the Address-Based Birth Recording System data from 31 December 2007 are listed in the following table, along with the results of the censuses from 21 October 1990 and 22 October 2000, as well as the provinces in which the cities are located. The numbers of inhabitants refer to the actual city, not including urban areas.