The following is a list of tribes who lived on the territories of contemporary Belarus, Russia, and Ukraine. The tribes were later replaced or consolidated by Slavs, starting with the formation of Kievan Rus', including the semi-autonomous principalities of the Grand Duchy of Lithuania, that existed in the first half of the second millennium. The area was later expanded to become the Tsardom of Russia, followed by the Russian Empire, which became part of the Soviet Union.

Clan cultures of the Stone Age and Bronze Age, up to the Late Antiquity period of the tribal societies that were replaced or incorporated into the Early Slavs.

The Slavs were a diverse group of tribal societies in the Iron Age and Migration Age Europe whose tribal organizations created the foundations for today's Slavic nations.[1] 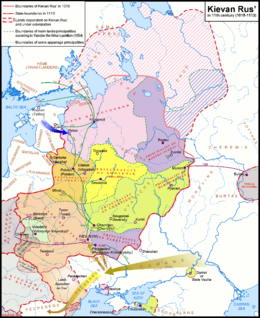 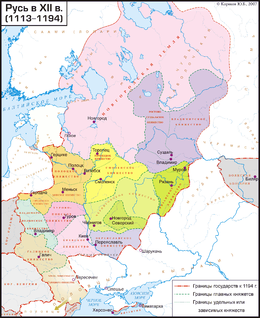 The Kievan Rus in the 12th century
See also: Council of Liubech and List of East Slavic duchies

From the Mongol invasion of Rus' to the Battle of Kulikovo 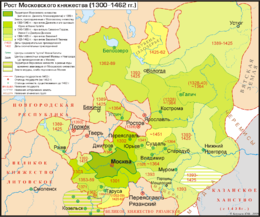 After the Battle of Kulikovo

The Grand Duchy, The Tsardom and The Empire (since 1480)

After the Great stand on the Ugra river

After the February Revolution:

After the Cold War: