A folk festival celebrates traditional folk crafts and folk music. The following is an incomplete list of folk festivals worldwide. This list generally excludes festivals with only a partial focus on folk music or arts, though these multi-genre festivals may be included in individual subcategories of Category:Folk festivals by country.

Folk festivals may feature folk art and folk music, with a focus on both or either, as well as folk dance or ethnic foods. Featured genres are often catered to a particular region or culture, for example Celtic festivals or maritime music festivals. Diverse regional genres of folk music are popular among modern audiences, and there are major folk music festivals in many countries. It is sometimes claimed that the earliest modern folk festival was the 1928 Mountain Dance and Folk Festival in Asheville, North Carolina, founded by Bascom Lamar Lunsford.[citation needed] Since then festivals have grown in size, such as the Feast of the Hunters' Moon in Indiana, which draws approximately 60,000 visitors per year.[citation needed] Some offshoots of folk music, such as country music and bluegrass music, have festival circuits devoted solely to the genre.

Handicrafting has long been exhibited at such events and festival-like gatherings, as it has its roots in the rural crafts. Like folk art, handicraft output often has cultural, political, and/or religious significance. Folk art encompasses art produced from an indigenous culture or by peasants or other laboring tradespeople. In contrast to fine art, folk art is primarily utilitarian and decorative rather than purely aesthetic, and is often sold at festivals by tradespeople or practicing amateurs.[1] As at folk festivals, such art and handicraft may also appear at historical reenactments and events such as Renaissance fairs. 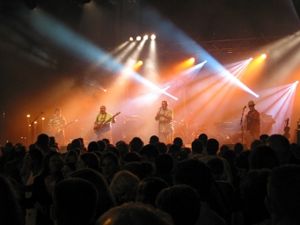 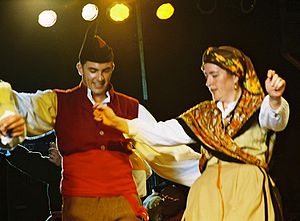 The 2004 Interceltic Festival of Avilés in Asturias, Spain