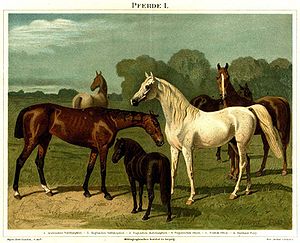 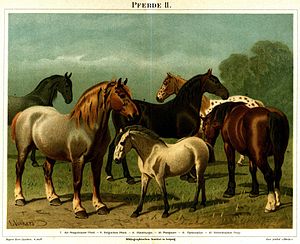 This page is a list of horse and pony breeds, and also includes terms for types of horse that are not breeds but are commonly mistaken for breeds. While there is no scientifically accepted definition of the term "breed,"[1] a breed is defined generally as having distinct true-breeding characteristics over a number of generations; its members may be called "purebred". In most cases, bloodlines of horse breeds are recorded with a breed registry. However, in horses, the concept is somewhat flexible, as open stud books are created for developing horse breeds that are not yet fully true-breeding. Registries also are considered the authority as to whether a given breed is listed as a "horse" or a "pony". There are also a number of "color breed", sport horse, and gaited horse registries for horses with various phenotypes or other traits, which admit any animal fitting a given set of physical characteristics, even if there is little or no evidence of the trait being a true-breeding characteristic. Other recording entities or specialty organizations may recognize horses from multiple breeds, thus, for the purposes of this article, such animals are classified as a "type" rather than a "breed".

The breeds and types listed here are those that already have a Wikipedia article. For a more extensive list, see the List of all horse breeds in DAD-IS.

For additional information, see horse breed, horse breeding and the individual articles listed below. Additional articles may be listed under Category:Horse breeds and Category:Types of horse.

Horses are members of Equus ferus caballus that generally mature to be 14.2 hands (58 inches (150 cm)) or taller, but many breed registries do accept animals under this height and classify them as "horses," as horse characteristics include factors other than height. For the purposes of this page, if a breed registry or stud book classifies the breed as a horse, it is listed here as a horse, even if some representatives are pony-sized or have some pony characteristics. Pony breeds are listed in the next section, below.

Ponies are usually classified as members of Equus caballus that mature at less than 14.2 hands. However, some pony breeds may occasionally have individuals who mature over 14.2 but retain all other breed characteristics. There are also some breeds that now frequently mature over 14.2 hands due to modern nutrition and management, yet retain the historic classification "pony." For the purposes of this list, if a breed registry classifies the breed as a "pony," it is listed here as such, even if some individuals have horse characteristics.

(Because of this designation by the preference of a given breed registry, most miniature horse breeds are listed as "horses," not ponies)

There are some registries that accept horses (and sometimes ponies and mules) of almost any breed or type for registration. Color is either the only criterion for registration or the primary criterion. These are called "color breeds," because unlike "true" horse breeds, there are few other physical requirements, nor is the stud book limited in any fashion. As a general rule, the color also does not always breed on (in some cases due to genetic impossibility), and offspring without the stated color are usually not eligible for recording with the color breed registry. There are breeds that have color that usually breeds "true" as well as distinctive physical characteristics and a limited stud book. These horses are true breeds that have a preferred color, not color breeds, and include the Friesian horse, the Cleveland Bay, the Appaloosa, and the American Paint Horse.

The best-known "color breed" registries that accept horses from many different breeds are for the following colors:

See also Category:Types of horse
A "type" of horse is not a breed but is used here to categorize groups of horses or horse breeds that are similar in appearance (phenotype) or use. A type usually has no breed registry, and often encompasses several breeds. However, in some nations, particularly in Europe, there is a recording method or means of studbook selection for certain types to allow them to be licensed for breeding. Horses of a given type may be registered as one of several different recognized breeds, or a grouping may include horses that are of no particular pedigree but meet a certain standard of appearance or use.

See also: Horses in Warfare and Horses in the Middle Ages

Prior to approximately the 13th century, few pedigrees were written down, and horses were classified by physical type or use. Thus, many terms for Horses in the Middle Ages did not refer to breeds as we know them today, but rather described appearance or purpose. These terms included:

These members of equus ferus either were a recognized, distinct breed of horse that no longer exists as such, or subspecies that have become extinct at some point since domestication of the horse. This section does not include any species within evolution of the horse prior to modern Equus ferus caballus.

Before the availability of DNA techniques to resolve the questions related to the domestication of the horse, various hypothesis were proposed. One classification was based on body types and conformation, suggesting the presence of four basic prototypes, labeled the "Tarpan", "Forest horse", Draft and "Oriental", each of which was hypothesized to have adapted to their environment prior to domestication.[2] However, more recent studies suggest that all domesticated horses originated from a single wild species and that the different body types of horses were entirely a result of selective breeding after domestication,[3] or possibly landrace adaptation.

These were human-developed breeds which no longer exist