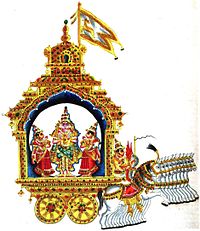 In mythology, a lunar deity is a god or goddess associated with or symbolizing the moon. These deities can have a variety of functions and traditions depending upon the culture, but they are often related to or an enemy of the solar deity. Even though they may be related, they are distinct from the solar deity. Lunar deities can be either male or female, but are usually held to be the opposite sex of the corresponding solar deity. Some form of moon worship can be found in most ancient religions.

Moon in religion and mythology

The monthly cycle of the moon, in contrast to the annual cycle of the sun's path, has been implicitly linked to women's menstrual cycles by many cultures, as evident in the links between the words for menstruation and for moon in many resultant languages.[1] Many of the most well-known mythologies feature female lunar deities, such as the Greek goddesses Phoebe, Artemis, Selene, and Hecate as well as the Chinese goddess Chang'e.

Male lunar gods are also frequent, such as Sin of the Mesopotamians, Mani of the Germanic tribes, and the Japanese god Tsukuyomi. These cultures usually featured female Sun goddesses. There are also many lunar deities that were prevalent in Greek and Egyptian civilizations. For example, Ibis and Chonsu of Thebes were both lunar deities. Thoth was also a lunar deity, but his character is considerably more complex than Ibis and Chonsu.[2] Set represented the Moon in the Egyptian Calendar of Lucky and Unlucky Days of papyrus Cairo 86637.[3]

The original Proto-Indo-European lunar deity appears to have been a male god.[4] In subsequent traditions, the number of male moon deities (or words for "moon" with a male gender) seem to vastly outnumber female ones, which appear to be an exclusively eastern Mediterranean invention. Several goddesses, like Artemis or Hecate, did not originally have lunar aspects, and only acquired them late in antiquity, due to syncretism with Selene/Luna, the de facto Greco-Latin lunar deity. In traditions with male gods, there is little evidence of such syncretism, though the Greco-Roman Hermes has been equated with male Egyptian lunar gods like Thoth. In Greece proper, remnants of male moon gods are also seen with Menelaus.

Also of significance is that many religions and societies are oriented chronologically by the Moon as opposed to the sun. One common example is Hinduism in which the word Chandra means Moon and has religious significance during many Hindu festivals (e.g. Karwa Chauth, Sankasht Chaturthi and during the eclipses).

The moon is also worshipped in witchcraft, both in its modern form and in Medieval times, for example, in the cult of Madonna Oriente. It features prominently in art and literature and also the purported influence of the moon in human affairs remains a feature of astrology and theology.