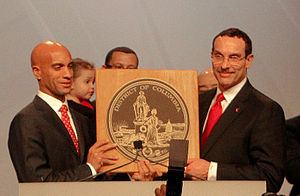 Currently, the Mayor of the District of Columbia is popularly elected to a four-year term with no term limits. Even though Washington, DC is not a state, the city government also has certain state-level responsibilities, making some of the mayor's duties analogous to those of United States governors. The current mayor of Washington, D.C. is Muriel Bowser, a Democrat, who has served in the role since January 2, 2015.

The lists on this page include all of the chief executives of the District of Columbia in their various forms.

The persons listed below are the mayors of the now-defunct City of Washington, which was officially granted a formal government in 1802. The Mayor of Washington had authority over city services, appointments, and local tax assessments; however, the duties of the mayor mostly consisted of requesting appropriations from Congress to finance the city. From 1802 to 1812, the mayor was appointed by the President of the United States. Between 1812 and 1820, the city's mayors were then selected by a city council. From 1820 to 1871 the mayor was popularly elected. The present-day boundaries of the "Old City" were Rock Creek to the west, Florida Avenue to the north, and the Anacostia River to the east and south.

Georgetown was a town in Maryland until 1801, when it became a municipality within the District of Columbia. From 1802 until 1871, mayors of Georgetown were elected to one-year terms, with no term limits.[3] Like the City of Washington and Washington County, Georgetown's local government ceased to exist in 1871, when Congress merged the three entities into the single District government.[4]

In 1871, Congress created a territorial government for the entire District of Columbia, which was headed by a governor appointed by the President of the United States to a four-year term. Due to alleged mismanagement and corruption, including allegations of contractors bribing members of the District legislature to receive contracts,[5] the territorial government was discontinued in 1874.

From 1874 to 1967, the District was administered by a three-member Board of Commissioners with both legislative and executive authority, all appointed by the President. The board comprised one Democrat, one Republican, and one civil engineer with no specified party. The three Commissioners would then elect one of their number to serve as president of the board. While not quite analogous to the role of a mayor, the president of the board was the city's Chief Executive.

Council members had the quasi-legislative powers of the former Board of Commissioners, approving the budget and setting real estate tax rates.[10] The mayor-commissioner could, without any Congressional approval, consolidate District agencies and transfer money between agencies, powers that the preceding Board of Commissioners had not possessed since 1952.[12] The mayor-commissioner could veto the actions of the Council, but the Council could override the veto with a three-fourths vote.[10]

Mayors of the District of Columbia (1975–present)

Since 1975, the District has been administered by a popularly elected mayor and city council.