This is a list of all monitors of the United States Navy. While the most famous name is represented in this list, many monitors held multiple names during their service life. View the complete list of names.

The whole category of monitors took its name from the first of these, USS Monitor, designed in 1861 by John Ericsson. They were low-freeboard, steam-powered ironclad vessels, with one or two rotating armored turrets, rather than the traditional broadside of guns. The low freeboard meant that these ships were unsuitable for ocean-going duties and were always at risk of swamping and possible loss, but it reduced the amount of armor required for protection.

They were succeeded by more seaworthy armored cruisers and battleships. 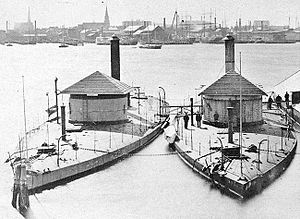 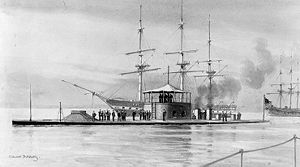 The Monitor, prototype for an entire class of warship.

The first five of these were ostensibly rebuilds of Civil War era monitors (in much the same way that the 1854 sloop-of-war Constellation was ostensibly a refit of the 1797 sail frigate Constellation). In fact, they were entirely new ships, much larger and more capable than the previous ones. 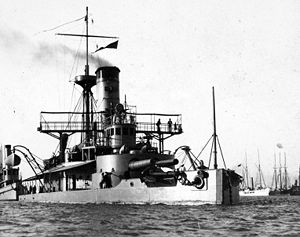 The US Navy created their first Mobile Riverine Force (MRF) for the first time since the American Civil War, during the Vietnam War. World War II all steel 56-foot (17 m)-long Landing Craft Mechanized (LCMs) were used as the basic hull to convert into 24 River Monitors in the Republic of Vietnam (RVN) from 1966-1970. This was a separate US Navy Mobile Riverine Force from the Swift Boats (PCFs) and PBRs already operating in country.[1]:10, 11 The twenty-four river Monitors were divided into two groups: Program 4 & 5. Ten Program 4 Monitors arrived first in Vietnam, and were armed with one 40mm cannon mounted inside a revolving Mk 52 turret; while the 8 later arriving Program 5 versions (designated Monitor "H") mounted one M49 105mm Howitzer inside a revolving T172 turret.[1]:27 Due to a shortage of M49 howitzers,[1]:82 the USN converted the remaining six Program 5 Monitors (designated Monitor "F") to Flamethrower Monitors, and equipped them with an M10-8 flamethrower mounted inside an M8 cupola turret. The early Program 4 Monitors had hull numbers reflecting their River Assault Division (RAD) as well as their hull number. Later, simply the hull numbers were used, such as M-1 (Monitor 1), A-1 (Alpha Boat 1), C-1 (Command/Communications/Control 1), etc. 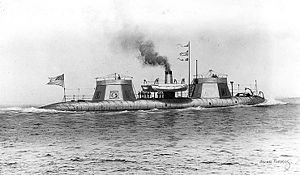