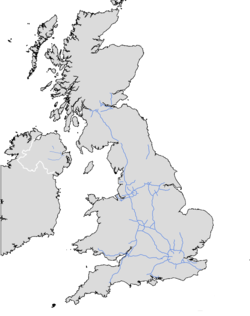 Map of the motorways in the United Kingdom

Roads which used to be motorways but have been downgraded:

Motorways that have been renamed

Motorways under construction or planned

The largest motorway project currently under construction in the UK is the £500m M8 Baillieston to Newhouse completion project, which includes 6 miles of new motorway on the M8 as well as junction upgrades and widenings to the M73 and M74.[14] Work started in Spring 2014 with completion estimated for Spring 2017.[15]

The Queensferry Crossing and its approach roads are also being constructed as a motorway and will extend the M90 to the M9 at junction 1a re-numbering the M9 spur when finished in 2016.

The only other new motorway constructions currently being planned in the UK is a motorway running south of the city of Newport, south Wales. This motorway remains to be properly named, only being described as the M4 relief road.

There have been many plans for motorways in the UK that have not been built. Below is a list of plans that were not built (not exhaustive):

Many cities had urban motorway plans, most of which were not built. London,[30] Newcastle,[31] Liverpool,[32] Manchester/SELNEC and Glasgow[33] all had extensive plans.

The following motorways were planned, but never built.

There were also urban motorway plans for Belfast[35][36]