There are a large number of music festivals in the United Kingdom, covering a wide variety of genres. Many of the UK's music festivals are world-renowned, and have been held for many years including the most famous, Glastonbury. There are also many high quality free festivals around the country including Scarborough's Acoustic Gathering Festival where performers are rowed onto a stage in the middle of a lake. The largest (best attended) free music festival in the UK is Basingstoke Live - with the attendance in 2010 estimated at 30,000.

History of music festivals in the UK

Large-scale modern music festivals began in the 1960s with festivals such as the Isle of Wight Festival and following the success of Woodstock in the United States and free festivals. Some began as jazz festivals - Reading Festival began as the National Jazz and Blues Festival in the 1960s and the first Glastonbury Festival was the 1970 Pilton Pop, Blues & Folk Festival.

Dance music at festivals became more popular in the late 1980s and earlyjf of mug of gig f f the time.

In the 21st century the number of festivals has grown significantly,[1] particularly with the emergence of smaller-scale "boutique" festivals. However, in 2011 and 2012, several festivals were cancelled at short notice - some due to weather conditions and some due to poor sales - prompting fears that the festival market is saturated.[2] 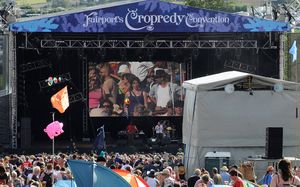 The stage at Fairport's Cropredy Convention festival, Oxfordshire, in August 2009.

File:Reading 06.JPG
The Main Stage at the 2006 Reading Festival.