The borough of Hastings, one of six local government districts in the English county of East Sussex, has more than 50 extant places of worship serving a wide range of religious denominations. A further 22 buildings formerly used for public worship, but now closed or used for other purposes, also exist. The borough is made up of the ancient port and seaside resort of Hastings, the neighbouring planned resort of St Leonards-on-Sea (united with its former rival in 1888)[1] and their 19th- and 20th-century suburbs, some of which (such as Ore and Hollington) were autonomous villages until they were absorbed into the growing urban area. Ancient churches existed in the Old Town of Hastings and in the villages, although some were lost in the medieval era; growth stimulated by transport improvements and the popularity of sea bathing encouraged a rush of church-building in the Victorian era; and more churches and congregations were established throughout the 20th century, despite periods of stagnation and decline.

Most residents of Hastings identify themselves as Christian, and churches representing many Christian denominations exist in the town. The largest number of these belong to the Church of England, the country's officially established church. Roman Catholic and Protestant Nonconformist churches of many types are also prevalent, and St Leonards-on-Sea has a mosque. The spread of housing inland in the 20th century, in suburbs such as Silverhill Park, Broomgrove and the vastly expanded Hollington (which was transformed from a haphazard collection of cottages among fields into a 1960s council estate), resulted in the founding of new churches, partly offsetting the loss through demolition of others in Hastings town centre.

English Heritage has awarded listed status to several current and former church buildings in Hastings. A building is defined as "listed" when it is placed on a statutory register of buildings of "special architectural or historic interest" in accordance with the Planning (Listed Buildings and Conservation Areas) Act 1990.[2] The Department for Culture, Media and Sport, a Government department, is responsible for this; English Heritage, a non-departmental public body, acts as an agency of the department to administer the process and advise the department on relevant issues.[3] There are three grades of listing status. Grade I, the highest, is defined as being of "exceptional interest"; Grade II* is used for "particularly important buildings of more than special interest"; and Grade II, the lowest, is used for buildings of "special interest".[4]

History of Hastings and its places of worship 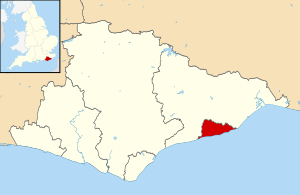 Hastings is a seaside town on the southeast coast of England, facing the English Channel. The borough covers 7,340 acres (2,970 ha) and had a population of 85,029 at the time of the United Kingdom Census 2001.[5] Hastings is most famous for the battle fought nearby in 1066, in which William the Conqueror's Norman army defeated the English troops of King Harold II,[6] but its recorded history is much longer: 5th-century origins have been attributed, Roman settlement on the site has never been proved but is considered likely,[7] and a town had developed by 928, when it was important enough to have its own mint.[8][9] By the 12th century, it was the main member of the Cinque Ports, and its castle dominated the cliff below which the ancient settlement developed.[10][11] There were seven churches in 1291, when Pope Nicholas IV ordered a survey of all places of worship in England, but decline set in during the 14th century and two French raids wrecked the town. By 1801, just two of the old churches—All Saints and St Clement's—survived.[10]

The common thread throughout the town's history has been fishing: in 1329 a priest was threatened with excommunication for failing to pay the Bishop of Chichester the 2,000 herring demanded by custom,[12] and a beach-based fishing fleet still exists in the 21st century.[13] The fishermen even had their own church from 1854 until World War II: the rectors of All Saints and St Clement's got together to provide a chapel of ease on the beach to serve their spiritual needs. The former St Nicholas' Church is now Hastings Fishermen's Museum.[14] The town's focus moved away from this industry and towards tourism and leisure from the early 19th century, though, as development spread west from the old town.[15] Improved transport opened the town up to day-trippers, especially from London; sea-bathing, promenading and other seaside leisure activities became increasingly fashionable; and James Burton capitalised on the demand for growth by founding an entirely new town, St Leonards-on-Sea, immediately west of Hastings—spurring its older rival into further growth.[8] The population rose from 2,982 to 6,051 between 1801 and 1821,[15] and the need to build more churches was recognised. In 1824, St Mary-in-the-Castle Church, which took its dedication from a ruined collegiate church in the castle grounds, was the first new Anglican church to be built outside Hastings Old Town;[10] but a Baptist chapel had already been established in 1817,[16] and another followed at Wellington Square in the 1830s.[17] Development was so rapid that Holy Trinity Church, the second town church in Hastings, had to be crowded into a "crazy site" when it was built in the 1850s.[18] St Leonards-on-Sea gained its first church, St Leonard's, in 1837, followed by St Mary Magdalen's Church in 1852 and an array of Nonconformist places of worship. (Dissenters were not universally welcomed: the town's first Congregational chapel, planned in 1807, had to be built in London and taken to the town by sea because no local firm wanted to build it. The weatherboarded chapel's successor survived until 1972.)[19][20] Hastings and St Leonards-on-Sea each have a large 1880s Roman Catholic church,[18][21] but worship by that community dates back to 1848, when the now disused St Michael's Chapel was opened for public use.[19] Rapid population growth continued throughout the 19th century: for example, the 1871 census recorded 29,289 residents, and there were 65,528 in 1901.[22] In response to this, 27 churches were built in Hastings and St Leonards-on-Sea in the second half of the century. Some were intended for high-class, fashionable visitors and residents; others were founded "with missionary zeal to bring some hope of redemption to working-class areas".[23]

In 1897, an Act of Parliament brought several surrounding villages into the borough of Hastings; nine years earlier the same had happened to St Leonards-on-Sea.[1] Places such as Ore and Hollington had become suburbanised but retained ancient churches as well as gaining new ones: Ore's 12th-century St Helen's Church was ruined in the 19th century, but a replacement was built nearby[24] and a second, Christ Church (distinguished by the "very naughty turret" on its roof), was provided to serve the village's Victorian suburbs;[25] and Hollington's 13th-century church in the middle of a wood[26] was supplemented by a second Anglican church and one for Methodists. The scattered village was later redeveloped into Hastings' largest council estate, and more places of worship were added for various congregations.[27]

All Anglican churches in the borough of Hastings are part of the Diocese of Chichester, whose cathedral is at Chichester in West Sussex.[29] The Rural Deanery of Hastings—one of eight deaneries in the Archdeaconry of Lewes and Hastings, which is in turn one of three archdeaconries in the diocese[30]—covers the whole borough and includes all 18 open Anglican churches.[31] Four churches which are no longer used for Anglican worship are still nominally included. St Mary Magdalen's Church in St Leonards-on-Sea, now used by the Greek Orthodox community, has been included in the parish of Christ Church.[32] The ruined St Helen's Church, near Ore, is part of the new St Helen's parish, together with St Barnabas' Church.[33] All Souls Church at Clive Vale has been included in the parish of Christ Church in Ore.[34] The long-closed church of St Mary-in-the-Castle on Hastings seafront is now in Emmanuel Church's parish.[35]

The Roman Catholic Diocese of Arundel and Brighton, whose cathedral is at Arundel,[36] administers the borough's three Roman Catholic churches. St Leonards-on-Sea Deanery, one of 13 deaneries in the diocese,[37] has five parishes, two of which cover the borough in its entirety.[38] St Mary Star of the Sea Church is the parish church of Hastings;[39] and the churches at St Leonards-on-Sea and Hollington are part of a joint parish.[40] The deanery's other three parishes are centred on the towns of Bexhill, Rye and Battle in the neighbouring districts of Rother and Wealden.[38]

The Hastings, Bexhill & Rye Methodist Circuit, a circuit in the Methodist Church's South East District, covers 13 churches of that denomination in the Hastings area. Four of those are in the borough: the Calvert Memorial church at Halton, the churches at Hollington and St Helen's, and the Park Road Church in Bohemia.[47]

Closed or disused places of worship