Other parties currently represented in the national Diet

Legal status as political party (seitō) is tied to having five members in the Diet or at least two percent nationally of either proportional or local vote in the last Representatives or one of the last two Councillors elections. Political parties receive public party funding (¥ 250 per citizen, about ¥ 32 bill. in total per fiscal year, distributed according to recent national elections results – last HR general and last two HC regular elections – and Diet strength on January 1), are allowed to concurrently nominate candidates for the House of Representatives in an electoral district and on a proportional list, may take political donations from legal persons, i.e. corporations, and other benefits such as air time on public broadcaster NHK.[1] 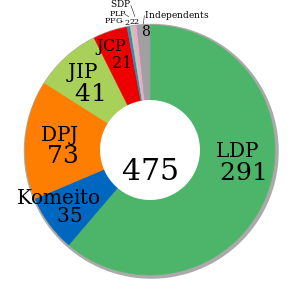 House of Representatives Election in 2014 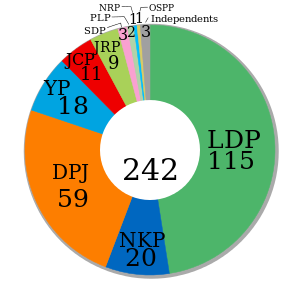 House of Councilors Election in 2013

Note: In legal terms, all of the parties below are "political organizations" (seiji dantai), not "political parties" (seitō, see above).

Existing national parties represented in the Diet in the past

Current political parties that used to be in the Diet but are not currently represented:

Japan has other minor parties not represented in Parliament (which have never been represented before), some are new, others with communist and socialist ideologies, as well as a few nationalist, reformist, and far right-wing parties. Some of them include:

See also: Political parties of the Empire of Japan

In 1940, all remaining political parties with the exception of the Tōhōkai became part of the Imperial Rule Assistance Association or were banned.

Note: Postwar parties often give themselves "English" names which sometimes differ significantly from translations of their Japanese names.

Other NFP and DPJ precursor and breakaway parties