From Infogalactic: the planetary knowledge core
Jump to: navigation, search
"Attendance" redirects here. It is not to be confused with Attend, attending, or attendant (disambiguation).

This article lists the attendances of many sports competitions around the world, based in some cases on the number of tickets sold or given away, rather than people actually present. The list is exclusively field and arena ball sports. Top leagues in weekly attendance includes speedway sports. 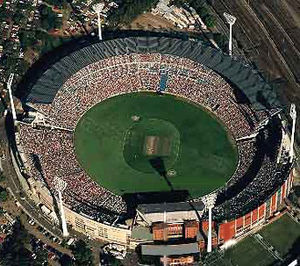 The Melbourne Cricket Ground during the 1992 Cricket World Cup final with 87,182 in attendance.

Top 10 Stadiums in total attendance in a calendar year

Note that other ticketed activities in motor sports such as practices and qualifying are not included in the number of "games" in a week.

* Games in a week only by team

* Weekly attendance only by team 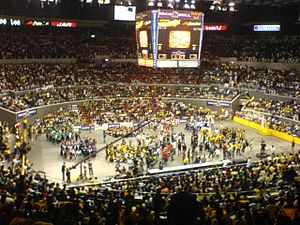 This section lists the most recent attendances at annual championship events (single decider matches or the final match in a best-of series only) by total attendance, and includes domestic leagues and competitions. It has to be noted that the listed crowd figures are usually a reflection of a championship venue's capacity, as demand for these events is generally so high that any stadium or arena would be filled to capacity.

The method by which championship venue(s) are determined can indirectly affect the attendance of such a match.

In most competitions that use a best-of final series, each individual match typically takes place at one team's home venue. In the Philippine Basketball Association, a competition in which no team has its own home arena, most finals matches (including any that can potentially end a series) are held at Araneta Coliseum, which had long been the country's largest indoor sports venue before the construction of Philippine Arena.

In most competitions that have a one-off final, the site is determined well in advance. Some competitions have a permanent site for their finals. Two notable examples are the Australian Football League, whose Grand Final is always at the Melbourne Cricket Ground (MCG), and the Gaelic Athletic Association, which holds its final matches in Gaelic football and hurling at Croke Park. Others determine the final venue anywhere from months to years before the event, such as the NFL, which determines the host of the Super Bowl more than three years in advance.

However, one transnational club event in rugby union (whose final attendance is listed in a separate table) uses a very different system. In Super Rugby, the final is awarded to the finalist that finished higher in the league table during the regular season. Another transnational club event in the same sport, Pro12 (formerly Celtic League), used the same method to determine the host of its final until 2015, when it began to use a predetermined site.

Of the eight American college sports conferences that sponsor football in the top-level Division I FBS that have season-ending conference championship games, four have a permanent site for their title games and four award hosting rights to the division champion with the better record in conference play (with tiebreakers used as needed).

For the purposes of this table, "domestic" is defined to include leagues which are historically focused in one country, but may have teams in one or more nearby countries. Examples of this phenomenon include:

The Euroleague in basketball is transnational in that it includes teams from multiple European countries, but is domestic in the sense of being a championship for the single entity of Europe. It is governed by the Euroleague Basketball Company, an explicitly pan-European body that is independent of the continental governing body of FIBA Europe.

This contrasts with leagues such as Super Rugby and Pro12, which operate in multiple countries with more than one team in each country, and also make no pretense of being a championship for a continental-size region. 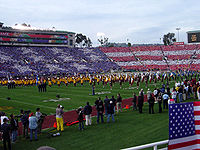 View of the crowd at the 2004 Rose Bowl College Football Game.

This section lists college and amateur leagues by total attendance. Remaining amateurism requirements in the majority of top-level sports were dropped in the late 20th century, and there are now only a few amateur leagues which are of interest to a wide public. In the United States, college sports are very popular and at least one significant ice hockey league retains an amateur requirement. In Ireland, the All-Ireland senior championships in Gaelic football and hurling, both operated by the Gaelic Athletic Association, which continues to prohibit professionalism, each draw over 80,000 to fill Croke Park for the respective finals.[131]

The NCAA championships listed here are all composed of several separate conferences with varying attendance levels. For example, in American football, per-game home attendances for the highest level of competition, Division I FBS, in the 2014 season ranged from 15,431 for Mid-American Conference teams to 77,694 for Southeastern Conference teams.[132][Note 5] NCAA Division I FBS football has the 2nd highest average attendance world-wide for any league-wide sport (behind the National Football League) and the 2nd highest overall attendance world-wide (behind Major League Baseball). For College Baseball, Dudy Noble Field, Polk-DeMent Stadium at Mississippi State University holds the on-campus attendance record at 15,586[133] and all of college baseball's Top 11 on-campus largest crowds.

This list covers special annual matches for representative sides that are not covered elsewhere by international or domestic fixtures. They include state or regional matches, annual commemorative games and publicly voted all-star selections. This type of events are unknown within European nations.

This section lists the attendances at international competitions between sport clubs, ranked by total attendance. These are usually organised on a continental basis. The teams which compete in these tournaments also compete in the domestic competitions in their home countries.

1 Current competition
2 Group stage only
3 This includes all stages except for the Euroleague Final Four.

This section lists the attendances at international competitions between national teams. These are usually organised on a continental basis. The teams which compete in these tournaments may also have competed in qualifying tournaments. The winners of continental championships usually play in a world cup or championship.

These are restricted to final matches of international club events.

These are restricted to final matches of international club events, played in a two-legged tie format. The two matches may be held in one or two different venues.