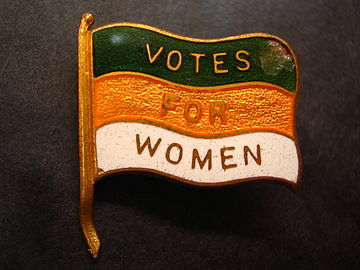 This list of suffragists and suffragettes includes noted individuals active in the worldwide women's suffrage movement who have campaigned or strongly advocated for women's suffrage, the organizations which they formed or joined, and the publications which publicized – and, in some nations, continue to publicize – their goals. Suffragists and suffragettes, often members of different groups and societies, used or use differing tactics. For example, suffragettes in the British usage denotes a more "militant" type of campaigner, and suffragettes in the United States organized such nonviolent events as the Silent Sentinels, the Suffrage Hikes, and the Woman Suffrage Parade of 19

Mabel Capper (3rd from right, with petition) and fellow Suffragettes 1910 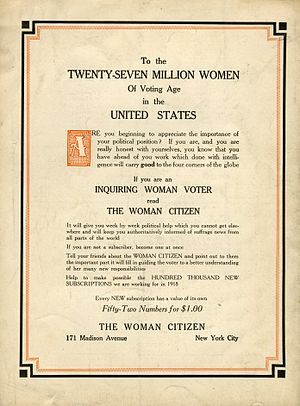 Back cover of The Woman Citizen magazine from Jan 19, 1918