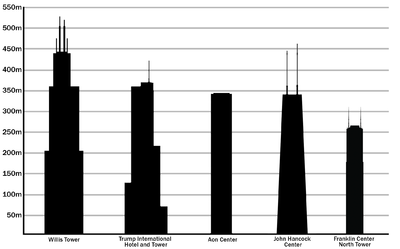 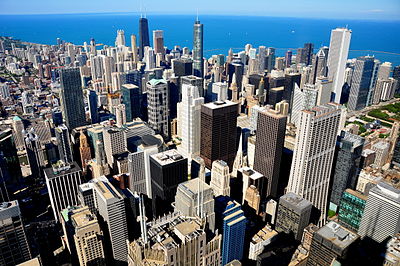 View of Chicago from Willis Tower, looking to the northeast

Chicago is the birthplace of the skyscraper.[7][8] The Home Insurance Building, completed in 1885, is regarded as the world's first skyscraper. This building used the steel-frame method, innovated in Chicago. It was originally built with 10 stories, a supertall height in the 1800s, to a height of 138 feet (42 m), making it the tallest building in the world. It was later expanded to 12 stories with a height of 180 feet (55 m). The building was demolished in 1931.[9][10] New York City then began building skyscrapers as Chicago had done, and the two cities were virtually the only cities in the world with huge skylines for many decades. Chicago has always played a prominent role in the development of skyscrapers and three past buildings have been the tallest building in the United States. Being the inventor of the skyscraper, Chicago went through a very early high-rise construction boom that lasted from the early 1920s to the late 1930s, during which 11 of the city's 91 tallest buildings were constructed. The city then went through an even much larger building boom that has lasted from the early 1960s. The tallest buildings are concentrated in various downtown districts such as the Loop, Streeterville, River North, the South Loop, and the West Loop. Other high-rises extend north along the waterfront into North Side districts such as the Gold Coast, Lincoln Park, Lakeview, Uptown and Edgewater. Some high-rises also extend south from downtown along the waterfront to South Side districts such as Kenwood, Hyde Park, and South Shore.

Several new skyscrapers were constructed in the city throughout the 2000s, including the Trump International Hotel & Tower. As of August 2014[update] there were 10 skyscrapers under construction in Chicago.[11]

This list ranks Chicago skyscrapers that stand at least 550 feet (168 m) tall, based on standard height measurement. This height includes spires and architectural details but does not include antenna masts. An equal sign (=) following a rank indicates the same height between two or more buildings. The "Year" column indicates the year of completion.

This list ranks Chicago skyscrapers based on their pinnacle height, which includes radio masts and antennas. Standard architectural height measurement, which excludes antennas in building height, is included for comparative purposes. The "Year" column indicates the year in which a building was completed. 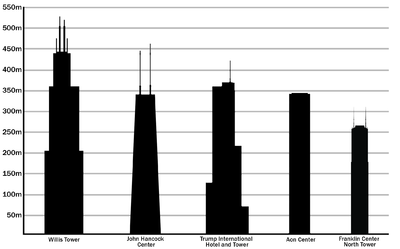 Tallest under construction or proposed

This lists buildings that are under construction in Chicago and are planned to rise at least 300 feet (91 m). Buildings whose construction is on-hold are also included. A floor count of 30 stories is used as the cutoff for buildings whose heights have not yet been released by their developers.

This lists buildings that are proposed for construction in Chicago and that are planned to rise at least 325 feet (99 m). A floor count of 50 stories is used as the cutoff for buildings whose heights have not yet been released by their developers.

* Table entries with dashes (—) indicate that information regarding expected building heights, floor counts or dates of completion has not yet been released.

Current Chicago Board of Trade Building 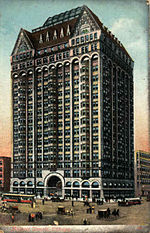 A. ^ This building was destroyed by the Great Chicago Fire in 1871, and replaced by the current cathedral of the same name in 1875.
B. ^ The clock tower on this building was removed in 1895, allowing a shorter building to become the tallest in the city.
C. ^ The Masonic Temple, built in 1892, became the tallest in Chicago three years later when the Board of Trade Building had its clock tower removed.
D. ^ This building is currently 282 feet (86 m) tall, following the removal of a pyramid top and sculpture.