This is a List of First Lords of the Admiralty of England, Great Britain and then the United Kingdom. The earlier Lords High Admiral were mostly courtiers or members of the Royal family. When the office of Lord High Admiral was "put into commission" it was exercised by a board of Lords Commissioners (or "Sea Lords") headed by a First Lord of the Admiralty, and not by a single man. The office of First Lord remained a political one which did not need to be filled by a professional naval officer, although it sometimes was.

The first such First Lord of the Admiralty was Richard Weston, 1st Earl of Portland, who was appointed in 1628. In the 17th century and the early 18th century, it was not invariable for the Admiralty to be in commission, so there are gaps in the list of First Lords, and a small number of First Lords were for a time Lord High Admiral.

In 1964, the office of First Lord of the Admiralty was abolished, the last holder being the second Earl Jellicoe, the son of Admiral of the Fleet Earl Jellicoe, and the functions of the Sea Lords were then transferred to the Admiralty Board, which forms part of the tri-service Defence Council of the United Kingdom. 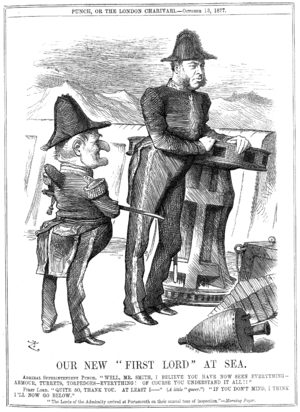 W. H. Smith portrayed in a Punch cartoon from 13 October 1877 when First Lord, saying: "I think I'll now go below." In Pinafore, Sir Joseph Porter similarly sings: "When the breezes blow / I generally go below".

The "Radical" First Lord, and a major character, in Gilbert and Sullivan's comic opera H.M.S. Pinafore (1878), is Sir Joseph Henry Porter, KCB. W. S. Gilbert wrote to Arthur Sullivan he did not intend to portray the real-life then First Lord, plain W. H. Smith, a Conservative,[4] although some of the public, including Prime Minister Disraeli (who later referred to Smith as "Pinafore Smith"), identified Porter with him.[5] The counterparts shared a known lack of naval background. It has been suggested the character was drawn on Smith's actual "Radical" predecessor of 1868–71, Hugh Childers.[6]