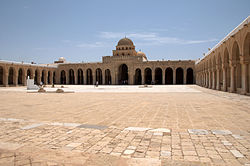 Mosque of Uqba, founded in 670 in Tunisia

To be listed here a site must:

▪ Iljaz Mirahori Mosque, is a historic mosque in Korçë, Albania. It was built in 1494 by Iljaz Hoxha, also known as Iljaz Bey Mirahor.[6] It is a Cultural Monument of Albania.[7]

▪ King Mosque, Elbasan or Sulltan Bayazit mosque in Elbasan was builted around 1482.

See also: List of mosques in the United States