From Infogalactic: the planetary knowledge core
Jump to: navigation, search
This article is about citizenship and voting eligibility tests in the United States. For the standardized test given in Ontario high schools, see Ontario Secondary School Literacy Test. 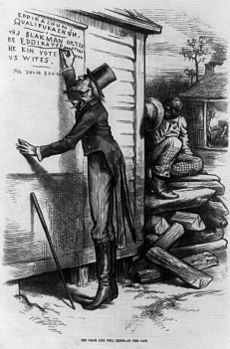 Editorial cartoon from the January 18, 1879, issue of Harper's Weekly criticizing the use of literacy tests. It shows "Mr. Solid South" writing on wall, "Eddikashun qualifukashun. The Blak man orter be eddikated afore he kin vote with us Wites, signed Mr. Solid South."

A literacy test is a test of a person's understanding of a particular language. Throughout history, literacy tests have been administered by various governments to immigrants, and in the United States between the 1890s and 1960s, literacy tests were also administered to prospective voters and used to disenfranchise racial minorities.

Anglophone Canada heavily promoted immigration from Europe in the early 20th century. British Columbia insisted on blocking all further immigration from Asia, literate or not.[1] British and Irish immigrants were all welcome; at issue was a literacy test that would screen out most applicants from Italy, Russia and other parts of Southern and Eastern Europe. In 1919 major new legislation was passed (at a time when French-speakers were virtually powerless in Parliament). A wide range of public opinion expressed mounting fears and culturally based stereotypes along with articulations of idealized national identity through the Canadianization of immigrants.[2]

Between the 1890s to the 1960s, many state governments in the Southern United States administered literacy tests to prospective voters purportedly to test their literacy in order to vote. In practice, these tests were intended to disenfranchise racial minorities. Southern state legislatures employed literacy tests as part of the voter registration process starting in the late 19th century. Literacy tests, along with poll taxes and extra-legal intimidation,[3] were used to deny suffrage to African Americans. The first formal voter literacy tests were introduced in 1890. At first, whites were generally exempted from the literacy test if they could meet alternate requirements (the grandfather clause) that, in practice, excluded blacks. The Grandfather Clause allowed an illiterate person to vote if he could show descent from someone who was eligible to vote before 1867 (when most African Americans were slaves or otherwise ineligible to vote). Grandfather clauses were ruled unconstitutional by the United States Supreme Court in the case of Guinn v. United States (1915).

In Lassiter v. Northampton County Board of Elections (1959), the U.S. Supreme Court held that literacy tests were not necessarily violations of Equal Protection Clause of the Fourteenth Amendment nor of the Fifteenth Amendment. Southern states abandoned the literacy test only when forced to do so by federal legislation in the 1960s. The Civil Rights Act of 1964 provided that literacy tests used as a qualification for voting in federal elections be administered wholly in writing and only to persons who had completed six years of formal education.

In part to curtail the use of literacy tests, Congress enacted the Voting Rights Act of 1965. The Act prohibited jurisdictions from administering literacy tests to citizens who attained a sixth-grade education in an American school in which the predominant language was Spanish, such as schools in Puerto Rico.[4] The Supreme Court upheld this provision in Katzenbach v. Morgan (1966). Although the Court had earlier held in Lassiter that literacy tests did not violate the Fourteenth Amendment,[5] in Morgan the Court held that Congress could enforce Fourteenth Amendment rights—such as the right to vote—by prohibiting conduct it deemed to interfere with such rights, even if that conduct may not be independently unconstitutional.[6][7]

As originally enacted, the Voting Rights Act also suspended the use of literacy tests in all jurisdictions in which less than 50% of voting-age residents were registered as of November 1, 1964, or had voted in the 1964 presidential election. In 1970, Congress amended the Act and expanded the ban on literacy tests to the entire country.[8] The Supreme Court then upheld the ban as constitutional in Oregon v. Mitchell (1970). The Court was deeply divided in this case, and a majority of justices did not agree on a rationale for the holding.[9][10]

The literacy test was a device to restrict the total number of immigrants while not offending the large element of ethnic voters. The "old" immigration (British, Irish, German, Scandinavian) had fallen off and was replaced by a "new" immigration from Italy, Russia and other points in Southern and eastern Europe. The "old" immigrants were voters and strongly approved of restricting the "new" immigrants. All groups of American voters strongly opposed Chinese and Asian immigration. The 1896 Republican platform called for a literacy test.[11]

The American Federation of Labor took the lead in promoting literacy tests that would exclude illiterate immigrants, primarily from Southern and Eastern Europe. A majority of the labor union membership were immigrants or sons of immigrants from Germany, Scandinavia and Britain, but the literacy test would not hinder immigration from those countries.[12]

Corporate industry however, needed new workers for its mines and factories and opposed any restrictions on immigration.[13] In 1906, the powerful House Speaker Joseph Gurney Cannon, a conservative Republican, worked aggressively to defeat a proposed literacy test for immigrants. A product of the western frontier, Cannon felt that moral probity was the only acceptable test for the quality of an immigrant. He worked with Secretary of State Elihu Root and President Theodore Roosevelt to set up the "Dillingham Commission," a blue ribbon body of experts that produced a 41-volume study of immigration. The Commission recommended a literacy test and the possibility of annual quotas.[14] Presidents Cleveland and Taft vetoed literacy tests in 1897 and 1913. President Wilson did the same in 1915 and 1917, but the test was passed over Wilson's second veto.[15]

The best selection of immigrants for two centuries has been a major theme in the politics of Europe and other countries as well.[16][17] In recent decades numerous studies have shown that public attitudes toward immigration stress fear of labor-market competition as a powerful indicator of anti-immigrant sentiment, in particular among less-educated or less-skilled citizens who fear being forced to compete for jobs.[18]