The Little League Baseball World Series is an annual baseball tournament for children aged 11 to 13 years old.[1] It was originally called the National Little League Tournament and was later renamed for the World Series in Major League Baseball. It was first held in 1947 and is held every August in South Williamsport, Pennsylvania, in the United States.[2] (The postal address of the organization is in Williamsport, but the stadium complex is in South Williamsport.)

Initially, only teams from the US competed in the "World Series" but it has since become a worldwide tournament. The tournament has gained popular renown, especially in the United States, where games from the Series and even from regional tournaments are broadcast on ESPN. In 2006, the age limit was changed such that players could turn 13 after May 1, not August 1, as had previously been the case. As the series takes place in August, many of the players have already turned 13 before the World Series. Starting in 2018, only the players who will be turning 13 after August 31st will be playing in the World Series. This change is currently being phased in starting with the players who were born on or after September 1, 2005.

In the summer months leading up to the Little League World Series, held each year in August, Little Leagues around the world select an All-Star team made up of players from its league. It is these All-Star teams that compete in district, sectional and/or divisional, and regional tournaments,[citation needed] hoping to advance to Williamsport for the Little League World Series. How many games a team has to play varies from region to region. In the United States, the tournaments at the lowest (district) level lack nationwide standardization. Some use pool play or double elimination, while others use single elimination.

In the United States, the fate of district winners varies widely from state to state. In some larger states such as Pennsylvania, New York, and California, the district winners advance to one of many sectional tournaments. The winners of each sectional tournament then advance to a state or divisional tournament, the latter only being held in Texas and California and are similar to the state tournaments held in less densely populated states. Most smaller states lack competition at the sectional level and go straight from district to state tournaments. A handful of states are composed of only one district, and the district champion is the automatic state champion.

With 4 exceptions, every state as well as the District of Columbia crowns a state champion,[3] and sends that team to represent it to one of eight regional tournaments. The exceptions involve California, Texas, North Dakota, and South Dakota. Because of their large geographic and population sizes, California and Texas send two representatives to their regional tournament; Northern California and Southern California in the West region tournament and Texas East and Texas West (whose areas encompass more than the geographical areas of East Texas and West Texas, splitting roughly along the I-35/I-37 corridor) compete in the Southwest region tournament. Conversely, North Dakota does not have any towns who play through Little League; the Dakotas have one district spanning the two states, and its winner becomes the joint champion and advances to the Midwest region tournament.

The Little League World Series consists of 16 teams—8 from the United States, and 8 from other countries. Prior to 2001 there were eight teams in the LLWS: four U.S. teams (Central, South, East, and West) and four international (Canada, Latin America, Europe, and the Far East). It should be noted that in 1975 there were only four teams in the LLWS, all from the United States. The international teams returned in 1976.

From 2001 to 2009, the 16 teams were divided into two brackets, the United States Bracket and the International Bracket. Each team was then randomly assigned to one of two "pools" in their respective bracket. In the opening days of the tournament, the teams competed round-robin within their own pool. The top two teams in each pool advanced to the semifinal of their bracket, where the first place team from one pool competed against the second place team from the other. The respective winners advanced to play in either the United States or International Final. The U.S. champion and the International champion advanced to compete in the Little League World Series Championship Game.

On April 14, 2010, Little League announced that starting in 2010, round robin play would be replaced by a double-elimination bracket in each pool. The winners of each pool would advance to single elimination US and International Championship games, and the winners of those games would advance to the World Championship game. Every team would play a minimum of three games: the four teams that lost their first two games would cross over and play U.S. vs. International games.[4]

On June 16, 2011, it was announced that the double-elimination format had been modified. The pools were eliminated in favor of placing the eight U.S. teams in one bracket, and the eight International teams in another bracket. The tournament remains double-elimination until the U.S. and International Championship games, where it becomes single-elimination. (That is, if the team that advances through the winner's bracket loses the championship game they are eliminated and the teams do not play a rubber game.) Each team still plays a minimum of three games, playing a "crossover" (U.S. vs. International) consolation game if eliminated after their second game.[5][6]

The eight regional tournament winners which compete in the United States Bracket of the Little League World Series, as well as the states those regional champions could possibly hail from are as follows:

The eight divisions which compete in the International Bracket are as follows:

Prior to 2008, instead of two separate geographic regions, Europe, the Middle East, and Africa held two coterminous regions:[7]

The Transatlantic and EMEA regions were geographically identical. Leagues from the Transatlantic region generally consisted of children and other dependents of American expatriates, typically Armed Forces personnel, international organization members, and oil company workers (such as the team representing the Saudi Aramco Residential Camp in Dhahran, which advanced to the World Series 19 times through 2007, including all the tournaments from 2001 through 2007). The leagues within the "EMEA" region consisted of players native to the league's own country. Representative teams for the Trans-Atlantic region had to have at least 51% nationals of Canada, the U.S. or Japan, while teams for the EMEA region could have no more than three players from those three countries.

Teams in the reorganized Europe and MEA regions did not have nationality restrictions, as evidenced by the 2009 series. In that year, both regions were won by teams made up primarily of children of American expatriates. Europe was represented by a team from Ramstein Air Base, a United States Air Force base in Germany, while MEA was represented for the second time in its two-year existence by the team from the Saudi Aramco camp.

On August 29, 2012, Little League announced a significant realignment of the international regions, which took effect in 2013:[8]

Admission to all LLWS games is free for all spectators. However, stadium seats for the championship game distributed in a random drawing of all interested parties due to high demand. Some games early round games, mostly games with Pennsylvania teams, will use a first-come, first-served way for admission if a big crowd is to be expected.[9] Lamade Stadium has a berm beyond the fences that has allowed the facility to hold up to 45,000 spectators. 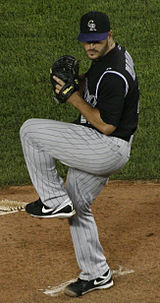 The first broadcast of the Little League World Series on television was on ABC Sports (now ESPN on ABC) in 1963. For years, only the championship game was televised. Since the late 1980s, when the tournament was reorganized, both the U.S. and international championships, the "semifinals," have been shown. As the years passed, more telecasts were added on ABC, ESPN, and ESPN2. In 2006, 28 of the 36 games were televised on the three networks.

The 2006 world championship game was to be the last telecast on ABC Sports before ESPN's complete takeover of the sports division and name change. However, the final was postponed one day because of rain and was shown by ESPN2.

In January 2007, it was announced that ESPN, ESPN2, and ABC had extended their contract with the Little League organization through 2014.[14] That year, every game of the LLWS was scheduled to be televised for the first time, with all but one game live on ESPN, ESPN2, or ABC. (The other game was to be available online at ESPN360, then shown on ESPN2 the next day.)[15] In addition, a number of games were to be shown in high-definition on one of ESPN's two dedicated HD channels, or on ABC HD. The championship games in all other divisions, as well as the semifinals and finals of the Little League Softball World Series, was scheduled for either ESPN, ESPN2 or ESPNU.

Coverage of the qualifying games has increased in the US recently: as of 2014, all regional group games (with the exception of the Southwest and New England regions) are streamed online via the ESPN3 platform, with the semifinals joining the finals on an ESPN network. The aforementioned Southwest and New England regional games are aired in full on the Longhorn Network (itself owned by ESPN) and NESN, respectively.

Most LLWS games are broadcast live on local radio station WRAK 1400AM, which is owned by Clear Channel. The radio broadcasts are also streamed online at the LLWS page at littleleague.org.

Other divisions in Little League Baseball

Each of the other eight divisions of Little League Baseball has its own World Series format.