The Little War (German: Kleinkrieg) was a series of conflicts between the Habsburgs and their allies and the Ottoman Empire between 1529 (after the Siege of Vienna) and 1552 (the end of the Siege of Eger). The war saw both sides suffering heavy casualties with the result that campaigning in Hungary would not cease until 1566. While overall, the Ottomans had the upper hand, the war failed to produce any decisive result. The Ottoman army remained very powerful in the open field but it often lost a significant amount of time besieging the many fortresses of the Hungarian frontier and its communication lines were now dangerously overstretched. At the end of the little war, the Turkish thrust into central Europe had effectively been stopped, but the Habsburg forces had failed in all their attempts to reclaim the whole of Hungary.

Following Suleiman's unsuccessful Siege of Vienna in 1529, Ferdinand I launched a counter-attack in 1530 to regain the initiative and avenge the destruction brought by Suleiman's 120,000 strong army.

Suleiman's response came in 1532 when he led a massive army of over 120,000 troops to besiege Vienna again. Ferdinand withdrew his army, leaving only 700 men with no cannons and a few guns to defend Güns (Kőszeg).[5] In the Siege of Güns, the Grand Vizier of the Ottomans, Ibrahim Pasha, did not realize how poorly defended Koszeg was; in fact Constantinople in 1453 stood a better chance. Nonetheless, under the leadership of Croatian Captain Nikola Jurišić, the city fought off every assault. The exact outcome of the battle is unknown, since it has two versions which differ depending on the source. In the first version Nikola Jurišić rejected the offer to surrender on favourable terms, and in the second version, the city was offered terms for a nominal surrender. In any case, the Ottomans withdrew at the arrival of the August rains.[5] During their retreat, they suffered a defeat at the battle of Leobersdorf against an imperial army led by Frederick II, elector palatine.[citation needed]

The Treaty of Constantinople (1533) was signed between Ferdinand and Suleiman. John Szapolyai was recognized as King of Hungary as an Ottoman vassal. However, the Ottomans recognized the land under Habsburg rule in Hungary.[6]

This treaty did not satisfy John Szapolyai or Ferdinand whose armies began to skirmish along the borders. Ferdinand decided to strike a decisive blow in 1537 at John by sending his ablest generals[6] to take Osijek, thereby violating the treaty. The siege failed and led to the Battle of Gorjani, which was a disaster of similar magnitude to that of Mohács with an Ottoman relief army smashing the Austrians.[6]

However, rather than attack Vienna again, Suleiman sent an army of 8,000 light cavalry to attack Otranto in southern Italy the same year. The troops were withdrawn from Italy after an expected French invasion designed to coordinate with Ottoman efforts failed to materialize. Nonetheless, an Ottoman victory at the naval Battle of Preveza in 1538 gave the Habsburg-led coalition another defeat.

In 1541, the Ottomans failed to take the fortress of Szigetvár. However a humiliating defeat was inflicted on the Habsburgs in the Siege of Buda (1541). John Szapolyai had died in 1540 and his son was only a few weeks old.[6] An Austrian attack on Buda followed the news of the death of John, but the appeals of John's widow to Suleiman were not unanswered and in 1541 the elderly General Rogendorf was defeated outside of Buda, before he could even cross the Danube to take it. The next year Ferdinand besieged Pest but was repulsed. 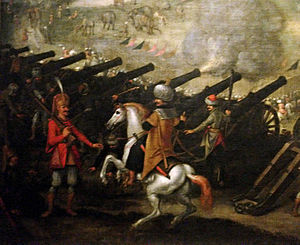 Ottoman cannon battery at the Siege of Esztergom, 1543 (detail).

In April 1543 Suleiman launched another campaign in Hungary, bringing back Bran and other forts so that much of Hungary was under Ottoman control. As part of a Franco-Ottoman alliance (see also: Franco-Hungarian alliance and Petar Keglević), French troops were supplied to the Ottomans in Hungary: a French artillery unit was dispatched in 1543–1544 and attached to the Ottoman Army.[1][2][3] In August 1543, the Ottoman succeeded in the Siege of Esztergom[7] The siege would be followed by the capture of the Hungarian coronation city of Székesfehérvár in September 1543.[8] Other cities that were captured during this campaign are Siklós and Szeged in order to better protect Buda.[7] However, continuous delay of the push toward the west, because of the siege of these fortresses, meant that the Ottomans could not launch any new offensive against Austria.

From 1548 to the end of the war, a Habsburg Spanish infantry tercio which had fought in the Schmalkaldic War, led by Maestre de campo Bernardo de Aldana, was detached in Hungary to fight against John Zápolya's supporters on behalf of Ferdinand.[9] In fact, the Holy Roman Emperor Charles V sent Spanish troops to help his brother regularly from 1527 to 1553, a support that proved instrumental in Hungary remaining inside Christianity.[10]

A peace agreement lasted between the Habsburgs and the Ottomans until 1552, when Suleiman decided to attack Eger. The Siege of Eger was futile; the locals of Eger attribute the victory to the constant stream of "bull's blood" (wine) supplied to them by the women. In 1556, the Turks once again tried to take Szigetvár, but they had to retreat when they saw a Habsburg relief army advancing toward the city.[11]

Suleiman made one more attack on Hungary in 1566 believing that a victory there might give him the happiness he needed in his old age. He was far too old to campaign and, although he had died during the Battle of Szigetvár, his campaign was successful in taking the fortress. However, the siege was long and difficult enough as to break the momentum of the Ottoman offensive.