From Infogalactic: the planetary knowledge core
Jump to: navigation, search
This article is about the live album by The Who. For other uses, see Live at Leeds (disambiguation).

Live at Leeds is the first live album by the English rock band The Who. It was the only live album that was released while the group were still actively recording and performing with their best known line-up of Roger Daltrey, Pete Townshend, John Entwistle and Keith Moon. Initially released in the United States on 16 May 1970, by Decca and MCA and the United Kingdom on 23 May 1970, by Track and Polydor, the album has been reissued on several occasions and in several different formats. Since its initial reception, Live at Leeds has been cited by several music critics as the best live rock recording of all time.[1][2][3] 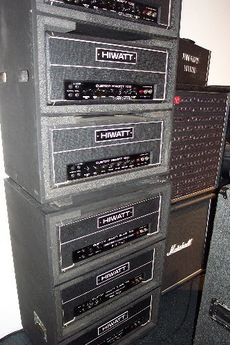 By the end of the 1960s, particularly after releasing Tommy in May 1969, The Who had become cited by many as one of the best live rock acts in the world. According to biographer Chris Charlesworth, "a sixth sense seemed to take over", leading them to "a kind of rock nirvana that most bands can only dream about".[4] The band were rehearsing and touring regularly, and Townshend had settled on using the Gibson SG as his main touring instrument, that allowed him to play faster than other guitars.[5] He began using Hiwatt amplifiers that allowed him to get a variety of tones simply by adjusting the guitar's volume level.[6]

Realising that their live show stood in equal importance to the rock-opera format of Tommy, the group returned to England at the end of 1969 with a desire to release a live album from concerts recorded earlier in the US. However, Townshend balked at the prospect of listening to all the accumulated recordings to decide which would make the best album, and, according to Charlesworth, instructed sound engineer Bob Pridden to burn the tapes.[4] Townshend later confirmed the tapes were indeed burnt in his back garden.[7]

Two shows were consequently scheduled, one at the University of Leeds and the other in Hull, for the express purpose of recording and releasing a live album. The Leeds concert was booked and arranged by Simon Brogan who later became an assistant manager on tour with Jethro Tull.[8] The shows were performed on 14 February 1970 at Leeds and on 15 February 1970 at Hull, but technical problems with the recordings from the Hull gig — the bass guitar had not been recorded on some of the songs — made it all the more necessary for the show from the 14th to be released as the album.[4]

The cover was designed by Beadrall Sutcliffe and resembled that of a bootleg LP of the era, parodying the Rolling Stones' Live'r Than You'll Ever Be.[9] It contains plain brown cardboard with "The Who Live At Leeds" printed on it in plain blue or red block letters as if stamped on with ink (on the original first English pressing of 300, this stamp is black). The original cover opened out, gatefold-style, and had a pocket on either side of the interior, with the record in a paper sleeve on one side and 12 facsimiles of various memorabilia on the other, including a photo of the band from the My Generation photoshoot in March 1965,[10] handwritten lyrics to the "Listening to You" chorus from Tommy, the typewritten lyrics to "My Generation", with hand written notes, a receipt for smoke bombs, a rejection letter from EMI,[11] and the early black "Maximum R&B" poster showing Pete Townshend wind-milling his Rickenbacker. The first 500 copies included a copy of the contract for the Who to play at the Woodstock Festival.

The label was handwritten (reportedly[according to whom?] by Townshend), and included instructions to the engineers not to attempt to remove any crackling noise. This is probably a reference to the clicking and popping on the pre-remastered version (notably in "Shakin' All Over") which was from John Entwistle's bass cable. Modern digital remastering techniques allowed this to be removed, and also allowed some of the worst-affected tracks from the gig to be used.

In a contemporary review for The New York Times, music critic Nik Cohn praised Live at Leeds as "the definitive hard-rock holocaust" and "the best live rock album ever made".[1] Jonathan Eisen of Circus magazine felt that it flows better than Tommy and that not since that album has there been one "quite so incredibly heavy, so inspired with the kind of kinetic energy that the Who have managed to harness" here.[18] Greil Marcus, writing in Rolling Stone, was less enthusiastic and said that, while Townshend's packaging for the album is "a tour-de-force of the rock and roll imagination", the music is dated and uneventful. He felt that Live at Leeds functions simply as a document of "the formal commercial end of the first great stage of [the Who's] great career."[19]

In a 1981 review, Robert Christgau asserted that, although side one is valuable for the live covers and "Substitute", the "uncool-at-any-length" "Magic Bus" and "My Generation" are not an improvement over their "raw" album versions.[13] In a retrospective review for AllMusic, Bruce Eder felt that the album was seen as a model of excellence for live rock and roll during the 1970s; that it was the Who's best up to that point, and that there was "certainly no better record of how this band was a volcano of violence on-stage, teetering on the edge of chaos but never blowing apart."[12] In a review of its 1995 CD reissue, Tom Sinclair of Entertainment Weekly asserted that it shows why the Who were important: "Few bands ever moved a mountain of sound around with this much dexterity and power."[14] Mojo magazine wrote that "the future for rock as it became, in all its pomp and circumstance, began right here."[15] Steven Hyden, writing for PopMatters, said that it is "not only the best live rock ‘n’ roll album ever, but the best rock album period."[20] Roy Carr of Classic Rock, reviewing the 2010 Super Deluxe Edition of the album, remarked how the new Live at Hull section "is noticeably more tight, more focused and even more aggressive" than the original recording, concluding that "we now have the two greatest live rock albums...ever."[2]

Blue plaque at the University of Leeds commemorating the album

Live at Leeds has been cited as the best live rock recording of all time by The Daily Telegraph,[21] The Independent,[22] the BBC,[23] Q magazine,[24] and Rolling Stone.[25] In 2003, it was ranked number 170 on Rolling Stone's list of the 500 greatest albums of all time.[26] The venue at which it was recorded, the University Refectory, was named a national landmark, commemorated with a blue plaque. On 17 June 2006, over 36 years after the original concert, the Who returned to perform at the Refectory, at a gig organised by Andy Kershaw. Kershaw stated the gig was "among the most magnificent I have ever seen".[27] A Rolling Stone readers' poll in 2012 ranked it the best live album of all time.[28]

In February 1995, the album was reissued as a remixed CD including more songs than the original vinyl edition, as well as song introductions and other banter that had been edited out of the original release. For the remix, new vocal overdubs from Daltrey, Townshend and Entwistle were recorded to address occasional flaws in the original tapes or performances.

"Fortune Teller" and "Young Man Blues" are R&B tunes that were a standard part of the Who's stage repertoire at the time. "Shakin' All Over" is a cover of a hit by pioneering early 1960s British rocker Johnny Kidd and "Summertime Blues" is a cover of an Eddie Cochran song.

"My Generation" is drawn out into an almost sixteen-minute medley including "See Me, Feel Me"/"Listening To You", "Underture", the instrumental riff from the end of "Naked Eye", "The Seeker", and a number of other mostly unrelated themes. "Magic Bus" is drawn out to seven and a half minutes (9:42 on the un-edited recording). On the originally released version, there is an 8-second segment near the beginning of "Magic Bus" (leading into the lyric I don't care how much I pay) where the music is played backwards. The 1995 and 2001 CD mixes edit this section differently and do not have the backward portion. The backwards portion was retained on Greatest Hits Live.

In September 2001, the album was released again as a part of the Universal Deluxe Edition series. The Deluxe Edition includes more chat between the songs, and the entirety of the band's Tommy set as performed at Leeds. Again, new overdubs from the vocalists were employed at select points.

An excerpt from this recording of "We're Not Gonna Take It"—titled "See Me Feel Me/Listening to You"—was also previously released on Thirty Years Of Maximum R&B.

During the concert, "Summertime Blues", "Shakin' All Over", "My Generation", and "Magic Bus" were played after the Tommy set, but for easier listening, the Deluxe Edition devoted the entire second disc to the Tommy set, and moved "My Generation" and "Magic Bus" out of order to the end of the first disc. During 1970, this was the regular Who concert set list, but an album with a 1970 concert in true order wasn't available until 1996 when the official Live at the Isle of Wight Festival 1970 album was released.

In November 2010, Universal Music released a 40th Anniversary edition of the album which contained the full Leeds show from 14 February 1970 and the band's complete performance from Hull, recorded the following evening, as well as a heavyweight vinyl reproduction of the original six-track album, memorabilia and a replica 7-inch single of "Summertime Blues"/"Heaven and Hell".[29] This performance had previously been unavailable because of a problem with the recording of John Entwistle's bass guitar on the first six songs. To fix this problem his performance at the Leeds show was overdubbed over these tracks of the Hull performance using digital technology.

In November 2014, the complete concert was released in set list order on iTunes and HDtracks, with restoration of much in-between song patter.

1.^ Moon normally sang a few backing vocals during this period of the Who's career, particularly on "I Can't Explain", though sound engineer Bob Pridden frequently muted his vocal microphone.[36] This appears to have been done for the Leeds show, with Townshend making light of it before announcing "A Quick One, While He's Away", stating "We do feature normally Keith Moon singing, but today we'll just have to feature him."[37]