From Infogalactic: the planetary knowledge core
Jump to: navigation, search
Not to be confused with University of Liverpool or Liverpool John Moores University.

Liverpool Hope University is a public university in Liverpool, England. As the only ecumenical university in Europe its work has been shaped by Christian principles but embraces those of all faiths and none.[5] The university comprises three faculties – Arts and Humanities, Education, and Science – organised into 19 departments.[6]

The university has two campuses, the main Hope Park campus is located in the suburb of Childwall and the second campus, The Creative Campus, is located in Everton, close to the city centre.

Two of the university's founding colleges, S. Katharine's (1844) and Notre Dame (1856) were established in the 19th century. These colleges were in Warrington and Liverpool City Centre respectively. These were among the first to provide opportunities for higher education to women. They were supplemented on Merseyside when a second Catholic teacher education college, Christ's College, on a site adjacent to St. Katharine's, admitted its first students in 1964. (Christ's was the first Catholic co-educational teachers' training college in England.)

In 1980, these three colleges joined in an ecumenical federation under the holding title of Liverpool Institute of Higher Education (LIHE). Archbishop Derek Worlock and Bishop David Sheppard wrote of this as being "a sign of hope".

In 1995, a new Instrument and Articles of Government established a single, unified, ecumenical College, and a new name: Liverpool Hope. A company limited by guarantee and registered as a charity was formed.

Meanwhile, expansion followed in both the range of degrees and in student numbers. The status of a fully accredited institution of the University of Liverpool had been achieved in 1994. This gave full responsibility to the college for the quality and standards of its course provision and provided recognition of its academic standing.

In 1998, the Accreditation Agreement with the University of Liverpool was renewed for five years and extended to cover taught postgraduate awards. After extensive scrutiny by the Quality Assurance Agency in 2001 and 2002, Liverpool Hope gained taught degree awarding powers in August 2002.

In September 2007 work was completed on the student services building, named the 'Gateway to Hope'. The building draws together all of the university's student services such as Registry, Accommodation Offices and the newly launched Student Success Zone.

In January 2009 work began on a new £7.5m Centre for Music, Performance and Innovation at the Hope's Cornerstone campus. The centre was officially opened in March 2010.

In March 2009, the university awarded Vasily Petrenko, Chief Conductor of the Royal Liverpool Philharmonic Orchestra, an honorary doctorate and made him a Visiting Professor of Music.

The university's £8.5m Eden Building on the university's Hope Park campus opened in October 2010. The centre consists of a lecture theatre, meeting space, offices and seminar and teaching rooms grouped around an internal street atrium.

In 2010 the Creative Campus was completed with the opening of The Capstone, a new Music Teaching building and performance venue which includes the Hope Theatre concert hall and Angel Field, a new garden with an outdoor performance area. 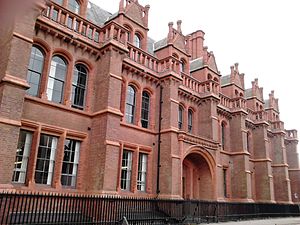 The Sheppard-Worlock Library is the university's central library, based at the Hope Park campus. Housed within the Hilda Constance Building, the library offers extended hours throughout the year, including periods of 24 hour opening.

The Library takes its name from Bishop David Sheppard and Archbishop Derek Worlock. The two men were noted for their work in healing sectarian divisions within Liverpool during the 1970s and 80s. In addition, they shared the ambition for an ecumenical foundation in Liverpool Hope.

On a historic visit to London, Archbishop Derek Worlock and Bishop David Sheppard secured from the Secretary of State for Education permission to create an ecumenical institute of higher education. The story goes that the minister of state for further and higher education, Gordon Oakes (who was MP for the nearby constituency of Widnes), was not particularly concerned about the constitution of the new institute as he believed it would not last a year.

In 1997, one of the final acts of Jim Burke as Rector was to approve the building of a new library at a cost of £5.34million – the Sheppard-Worlock library which opened in 1997.

It is a member of the Libraries Together: Liverpool Learning Partnership (evolved from Liverpool Libraries Group) which formed in 1990. Under which, a registered reader at any of the member libraries can have access rights to the other libraries within the partnership.[7][8]

In addition to a wealth of publications, research material, extensive computing facilities and stationery sales, the library also plays host to a number of commercial activities in the business and education communities. The library also houses a number of research collections. These include:

The university owned accommodation on both campuses. At the main Hope Park campus, set in the landscaped gardens, there are:

The Creative Campus is served by Gerard Manley Hopkins Hall. The university also has halls of residence at Aigburth.

The university's academic organisation is divided into three main faculties:

The union is affiliated to the National Union of Students and sends two delegates to National Conference each year.

Students can represent themselves through the three Union Forums (students' open meetings) and also elect Part Time Officers (4 Liberation Officers, 2 Campus Reps, 3 Sections Reps) to specific positions in November of each academic year. The main representatives are the three Sabbatical Officers who work full-time to represent and support students. The election process is normally contested in March, with successful candidates assuming office in July.

LHSU opened a new advice service in June 2014; it provides free, independent, confidential and impartial advice to students on their rights and responsibilities. More opportunities to get involved with the University community were also been created through the establishment of 32 new societies, taking the number of student groups from 42 in 2014 to 74 in 2015.[14]

According to the 2015 National Student Survey (NSS) results, satisfaction with Liverpool Hope Students’ Union has increased to 68 percent, a 14 percent improvement in satisfaction from last year - making LHSU the 2nd most improved union nationally in terms of score and ranking.[15]

The university also broadcasts its own student radio station, THIS Radio. THIS stands for The Hope Institute of Sound and is Liverpool Hope University’s brand new student radio station. We broadcast globally online at thisradio.co.uk and through the THIS Radio Smartphone App. The radio station broadcasts from studios at the main Hope Park campus, located with the media facilities by the Lecture Theatre Complex, opposite to the Student Services building The Gateway.[16]

After securing funding, the rebranding process began and in early 2014 a competition to find a new name was launched. The result of the competition was The Hope Institute of Sound abbreviated to THIS Radio. A promo video featuring the XFactor Voiceover Man Peter Dickson and 75 name entries later… THIS Radio was born! THIS Radio was announced on-air during Radio Hope's return to the Student Radio Association National UK Student Radio Chart show, on 23 May 2014.

THIS Radio will launch in the new academic year, from October, packed with shows that reflect individual interests and music tastes, whilst also providing essential campus, local and student news.[17]

Although not an alumnus of the university, comedian and silent film actor Charlie Chaplin temporarily lived in Salisbury Street and was registered as a pupil at Saint Francis Xavier’s Jesuit Secondary and Elementary Schools (now part of the Creative Campus), asserts Liverpool local historian Ken Pye.[22] Rolf Harris, received an honorary doctorate in 2010. This was subsequently withdrawn on 3 July 2014.[23]