Lives of the Most Eminent English Poets

From Infogalactic: the planetary knowledge core
(Redirected from Lives of the Poets)
Jump to: navigation, search

Lives of the Most Eminent English Poets (1779–81) is a work by Samuel Johnson, comprising short biographies and critical appraisals of 52 poets, most of whom lived during the eighteenth century. It is arranged, approximately, by date of death.

Six of the Lives have been singled out as the most "important": John Milton, John Dryden, Alexander Pope, Joseph Addison, Jonathan Swift, and Thomas Gray. One of the lives, Richard Savage, was previously printed as Life of Mr Richard Savage in 1744.

Johnson began writing his "lives", or individual biographical pieces, in 1740.[1] His first "lives" were of Jean-Philippe Baratier, Robert Blake, and Francis Drake.[1] In 1744 he wrote his first serious "life", the Life of Mr Richard Savage, in honour of his friend Richard Savage.[1] Between 1737 and 1739 Johnson became close to Savage.[2] In 1743 Savage found himself in debtors' prison and stayed there until his death shortly after being admitted.[3] A year later Johnson wrote Life of Savage (1744), a "moving" work that, according to Walter Jackson Bate, "remains one of the innovative works in the history of biography".[4]

In 1773 publishers in Edinburgh started producing editions of the collected works of various English poets.[1] In order to compete with this project Johnson was asked by Tom Davies, William Strahan and Thomas Cadell to create his final major work, the Lives of the English Poets.[5] He began the project and, on 3 May 1777, wrote to James Boswell that he was busy preparing a "little Lives" and "little Prefaces, to a little edition of the English Poets".[6] Johnson asked for 200 guineas, an amount significantly lower than the price he could have demanded.[5] He wrote many biographies over the next few years and reproduced his Life of Savage for the collection.[1]

The original work was, however, supposed to comprise the first ten volumes of a sixty-volume work.[7] Johnson's volumes were originally titled Prefaces, Biographical and Critical to the Works of the English Poets.[7] After Volumes I–IV were published in 1779, and Volumes V-X in 1781, the publishers decided to reprint the biographies as The Lives of the English Poets, or Lives of the Poets, and sell them as an independent work.[7] The new collection was finished in March 1781 and published in six volumes.[8] 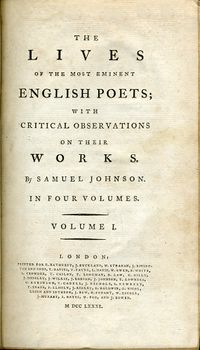 Title page of a 1781 edition of Samuel Johnson's Lives of the Poets.

The Lives, which are critical as well as biographical studies, appeared as prefaces to selections of each poet's work, and most of them were longer than originally expected.[9] Johnson justified his approach in the advertisement for the work: "my purpose was only to have allotted to every Poet an Advertisement, like those which we find in the French Miscellanies, containing a few dates and a general character."[1] However, he did not limit himself to bare dates and biographical events, but created a series of Lives with, according to his Preface to the edition of 1783, "the honest intention of giving pleasure".

Greg Clingham describes the Lives in these terms: "The topics in criticism covered in the Lives read like a list of most of the important issues in literary history during the years 1600–1781" along with having "equally important historical, biographical, and philosophical topics."[7]

Matthew Arnold, in his Six Chief Lives from Johnson's "Lives of the Poets", considered the Lives of John Milton, John Dryden, Alexander Pope, Joseph Addison, Jonathan Swift, and Thomas Gray as "points de repère" or "points which stand as so many natural centres, and by returning to which we can always find our way again".[10] These select Lives served as a model for Arnold's "ideal of liberal education".[1] In essence, these six Lives represented "a crucial century and a half in English literature".[1] For Arnold the whole work, focusing on these six, formed a "compendious story of a whole important age in English literature, told by a great man, and in a performance which is itself a piece of English literature of the first class".[11]

The poets included are: