From Infogalactic: the planetary knowledge core
Jump to: navigation, search
This article is about the band. For the television series, see In Living Color.

Living Colour is an American rock band from New York City, formed in 1984. Stylistically, the band's music is a creative fusion influenced by heavy metal, funk, jazz, hip hop and alternative rock. Their lyrics range from personal to political.

Living Colour rose to fame with their debut album Vivid in 1988.[5] Although the band scored a number of hits, they are best remembered for their signature song "Cult of Personality", which won a Grammy Award for Best Hard Rock Performance in 1990. They were also named Best New Artist at the 1989 MTV Video Music Awards. After disbanding in 1995,[5] Living Colour reunited in late 2000.[6]

English-born guitarist Vernon Reid had formed a number of bands, and after a few years, he formed Living Colour in New York in 1984. Reid assembled a number of bands under the name Living Colour from 1984 to 1986.[7] They grew out of the Black Rock Coalition, a non-profit organization founded by (among others) Reid for black musicians interested in playing rock music.[7] Reid was well known on the downtown New York jazz scenes because of his tenure in Ronald Shannon Jackson's Decoding Society.

In 1986 a stable lineup was formed, consisting of vocalist Corey Glover, guitarist Vernon Reid, bassist Muzz Skillings, and drummer Will Calhoun (who had graduated with honors from Berklee College of Music),[5] and the band hired managers Jim Grant and Roger Cramer. Soon after, the band became experienced at touring, including performing regular gigs at the club CBGB. Vivid, released on May 3, 1988, gathered sales momentum only when later that year, MTV began playing the video for "Cult of Personality". The album reached No. 6 on the U.S. Billboard 200 chart. On April 1, 1989, the band performed on NBC's Saturday Night Live. Four months later, the band gained further exposure as an opening act, along with Guns N' Roses, for The Rolling Stones' Steel Wheels/Urban Jungle Tour.

In 1991, Living Colour joined the inaugural Lollapalooza tour, and released an EP of outtakes entitled Biscuits.[5]

In 1992, Skillings left the band due to creative differences and was replaced by Doug Wimbish.[5] This new line up released their third full-length album, Stain, in February 1993. The album reached No. 26 in the U.S., a further drop since their debut.[5]

Despite retaining their strong fan base, Living Colour disbanded in January 1995, after failing to settle on a common musical goal during sessions for their fourth studio album.[5] Four of these tracks were included on the compilation Pride.

Living Colour reformed on December 21, 2000, at CBGB as a gig billed "Head>>Fake w/ special guests". Head>>Fake was the current drum and bass project headed by Calhoun and Wimbish. Glover was on the bill to sing a few songs and Reid came on after three songs. The reunion was followed by the release of the band's fourth studio album, Collideøscope, in 2003, their first album not to chart in the United States, although it was critically praised.[9][10] In 2005, Sony Records released Live from CBGB's, a live album recorded on December 19, 1989, as well as another best-of compilation, Everything Is Possible: The Very Best of Living Colour, with songs from Vivid to Collideøscope. 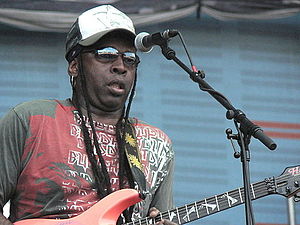 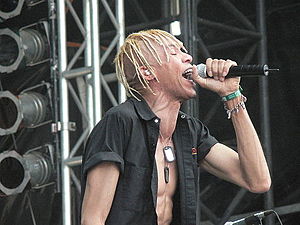 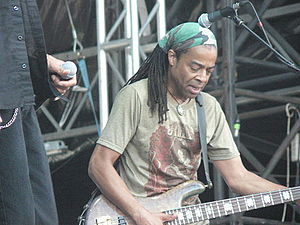 In August 2006, Glover took on the role of Judas Iscariot in a national tour of Jesus Christ Superstar, touring with JCS veteran Ted Neeley. Doug Pinnick, vocalist and bassist of King's X, filled in for Glover on lead vocals.[11] Glover's tour of the musical ran through June 2008, and he then rejoined the band. On September 22, 2006, Skillings joined the band for the first time in fourteen years when they played at a private party which drummer Jack DeJohnette threw for his wife Lydia. Wimbish was unable to come back from his base in London to play for the event, so Skillings agreed to take over for the special private event. 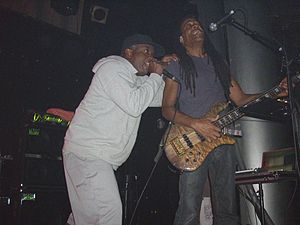 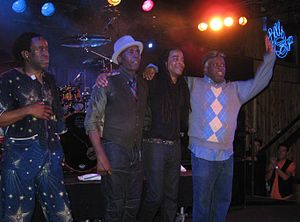 The band performed a week-long European Tour starting on December 12, 2006. In May 2007, the band released their first live DVD - On Stage At World Cafe Live. On July 11, 2008, the band performed at the 1980s hard rock-themed Rocklahoma festival at Pryor, Oklahoma. Once again, Skillings performed with them in August 2008 for a Black Rock Coalition Band of Gypsys tribute in Harlem. They performed "Them Changes" and "Power of Soul".

On October 25, 2008, MVD Audio and CBGB Records released CBGB OMFUG MASTERS: August 19, 2005 The Bowery Collection, a soundboard collection of songs from the Save CBGB's benefit show. On November 25, 2008, Inakustik and MVD released The Paris Concert (Living Colour DVD)|The Paris Concert, a DVD recorded at New Morning, in Paris, France, during their 2007 European Tour. The band released their fifth studio album, The Chair in the Doorway, on September 15, 2009 on Megaforce Records. The album sold approximately 2,800 copies in its first week and landed at No. 159 on the Billboard 200. This was the band's first album to chart since Stain in 1993. The band toured the world in support of the record.[12]

According to an interview on breakdownroom.net, Glover hopes to release another album with the band next year. "We're going to do something different [for us] and make a real record, right now, right after we've done this one," Glover said with a laugh. The band's song "Cult of Personality" received fresh exposure from 2011, as it was used as the entrance music for professional wrestler CM Punk. In 2013, Living Colour performed the song live during Punk's entrance at WrestleMania 29.

On July 2, 2014 Living Colour announced on their official website that they are putting the finishing touches on their upcoming album Shade due in late 2015. “Shade is the sound of a band coming to terms with its shadows and light, From the blue pulpit of Robert Johnson to the mean red streets of Brooklyn to the golden lure of Hollywood, Shade is the next chapter of a unique American journey,” Reid stated on the official website. In addition to Shade, it was also announced Living Colour will be doing a tour in the fall to celebrate their 30th anniversary.

Living Colour was ranked No. 70 on VH1's 100 Greatest Artists of Hard Rock.

"Cult of Personality" was part of the Grand Theft Auto: San Andreas repertoire of radio songs in Radio X. It was also the first song to be confirmed for the tracklist of Guitar Hero III: Legends of Rock. The version featured in Guitar Hero III is a new master recording of the song that features an updated solo, as the original masters could not be used.

In early 2009, WWE used "Cult of Personality" in the video promoting the induction of Stone Cold Steve Austin into its Hall of Fame. WWE performer CM Punk used the song as his entrance theme in Ring of Honor for a period of time.[14] CM Punk used other licensed music while working with WWE, but, after feigning a departure from the company in July 2011, he returned with "Cult of Personality" as his entrance theme.