Livonian Brothers of the Sword

The Livonian Brothers of the Sword (Latin: Fratres militiæ Christi Livoniae, German: Schwertbrüderorden) were a military order established by their second bishop, Bishop Albert of Riga, in 1202. Pope Innocent III sanctioned the establishment in 1204 for the second time. The membership of the order comprised German "warrior monks". Alternative names of the Order include Christ Knights, Sword Brethren, and The Militia of Christ of Livonia.

Following their defeat by the Samogitians and Semigallians in the Battle of Schaulen (Saule) in 1236, the surviving Brothers merged into the Teutonic Order as an autonomous branch and became known as the Livonian Order. 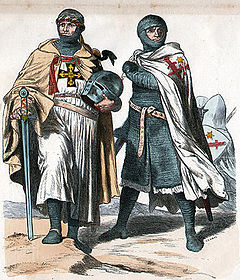 A Teutonic Knight on the left and a Swordbrother on the right.

Albert, Bishop of Riga (or Prince-Bishop of Livonia), founded the Brotherhood in 1202 to aid the Bishopric of Livonia in the conversion of the pagan Livonians, Latgalians and Selonians living across the ancient trade routes from the Gulf of Riga eastwards. From its foundation, the undisciplined Order tended to ignore its supposed vassalage to the bishops. In 1218, Albert asked King Valdemar II of Denmark for assistance, but Valdemar instead arranged a deal with the Brotherhood and conquered northern Estonia (now known as Danish Estonia) for Denmark.

The Brotherhood had its headquarters at Fellin (Viljandi) in present-day Estonia, where the walls of the Master's castle still[update] stand. Other strongholds included Wenden (Cēsis), Segewold (Sigulda) and Ascheraden (Aizkraukle). The commanders of Fellin, Goldingen (Kuldīga), Marienburg (Alūksne), Reval (Tallinn), and the bailiff of Weißenstein (Paide) belonged to the five-member entourage of the Order's Master.

Pope Gregory IX asked the Brothers to defend Finland from the Novgorodian attacks in his letter of November 24, 1232.[1] However, no known information regarding the knights' possible activities in Finland has survived. (Sweden eventually conquered Finland following the Second Swedish Crusade in 1249.)

The Order was decimated in the Battle of Schaulen (Saule) in 1236 against Lithuanians and Semigallians.[2] This disaster led the surviving Brothers to become incorporated into the Order of Teutonic Knights in the following year, and from that point on they became known as the Livonian Order.[3] They continued, however, to function in all respects (rule, clothing and policy) as an autonomous branch of the Teutonic Order, headed by their own Master (himself de jure subject to the Teutonic Order's Grand Master).

In the beginning of Vampire: The Masquerade - Redemption, the protagonist Christof Romuald is a human crusader who fights as a member of the order (referred to in-game as the Swordbrethren) in an alternate history Europe populated by vampires and other monstrous forces.

It also appears prominently in The Mongoliad, where they appear as one of the main antagonists of the fictional order to which the main characters belong.

'The Sword Brothers' by Peter Darman is a fictional account of the Livonian Brothers of the Sword set in the 13th century.

The order is featured in Medieval II: Total War, available as an infantry unit of the Teutonic Order.