Elizabeth Lynne Cheney Perry (/ˈtʃeɪni/; born July 28, 1966)[5] is an American attorney and politician who is the U.S. Representative for Wyoming's at-large congressional district.

A second generation elected office holder, Cheney is the elder daughter of former Vice President Dick Cheney and Lynne Cheney. She held several positions in the U.S. State Department during the George W. Bush administration. She has been politically active on behalf of the Republican Party and is a co-founder of Keep America Safe. She was briefly a candidate for the United States Senate in Wyoming, challenging the three-term incumbent Mike Enzi, before dropping out of the race. In the U.S. House, she holds the seat formerly held by her father.[6]

Cheney was born in Madison, Wisconsin, the elder of two daughters of former Vice President Dick Cheney and former Second Lady Lynne Cheney (née Vincent); Cheney attended part of sixth and seventh grade in Casper, Wyoming, while her father campaigned for Congress. The family split time between Casper and Washington, D.C. in the 1970s through the '80s following her father's election to Congress.[7] Cheney graduated from McLean High School (1984), where she was a cheerleader. She received her B.S. degree from Colorado College, where she wrote her senior thesis, "The Evolution of Presidential War Powers," (1988).[5] She received her J.D. degree from the University of Chicago Law School (1996), having also taken courses in Middle Eastern history at the Oriental Institute.[8]

Cheney is married to Philip Perry, a partner at the law firm of Latham & Watkins in Washington, D.C. They were married in Wyoming in 1993. She and Perry have five children.[9]

Before attending law school, Cheney worked for the State Department for five years and the U.S. Agency for International Development between 1989 and 1993. After 1993, she took a job at Armitage Associates LLP, the consulting firm founded by Richard Armitage, then a former Defense Department official and Iran-Contra operative who later served as Deputy Secretary of State.[10]

After graduating from law school, Cheney practiced law in the private sector (at the law firm of White & Case) and as an international law attorney and consultant at the International Finance Corporation, a member of the World Bank Group. She has also served as Special Assistant to the Deputy Secretary of State for Assistance to the former Soviet Union, and as a USAID officer in U.S. embassies in Budapest and Warsaw.[11]

Deputy Assistant Secretary of State for Near Eastern Affairs

In 2002, Cheney was appointed to the position of Deputy Assistant Secretary of State for Near Eastern Affairs,[12] a pre-existing vacant post with an "economic portfolio", which is a mandate to promote investment in the region. Amid reports, including a New York Times editorial by Paul Krugman, saying that the job was created especially for her, State Department spokesman Richard Boucher said that she had come recommended by then-Secretary of State Colin Powell.[13][14] The Sunday Times (London) reported that Cheney's appointment was "the most intriguing sign that America is getting serious about Middle East reform" and that the appointment was "a measure of the seriousness with which the administration was taking Middle East programmes for literacy, education, and reform."[15] The appointment followed publicized policy divisions between the Vice President's office and the State Department on Middle East policy. In that position, she was given control of the Middle East Partnership Initiative, designed to "foster increased democracy and economic progress in a troubled region." The program spent $29 million in 2002, increased to $129 million in the following year. Cheney's task was to channel money to pre-screened groups, some of which were not identified publicly for fear of retaliations from extant governments they sought to undermine. For the budget year 2004, the project sought $145 million.[16][17]

Cheney at the 2005 presidential inauguration

After two years of service, Cheney left her first State Department post in 2003 to serve in her father's re-election campaign.[18] Participating in the "W Stands for Women" initiative to target female voters, Cheney spoke often of how women have enlarged their scope of political issues, invoking the September 11 attacks and "security".[19]

Principal Deputy Assistant Secretary of State for Near Eastern Affairs

Elizabeth Cheney also headed the Iran Syria Policy and Operations Group (ISOG), established in March 2006, a unit within the State Department's Bureau of Near Eastern Affairs.

In April 2006, The New York Times published a story critical of Cheney's work, particularly with respect to Iran. Of particular scrutiny was a grants program administered by Elizabeth Cheney's unit, in collaboration with a Republican-affiliated foundation, the International Republican Institute.[23] The Times maintained that when the group became controversial, with critics saying that it was plotting covert actions that could escalate into war with Iran and Syria, the group was disbanded, by May 2006. Shortly before the ISOG group was dissolved, Secretary of State Condoleezza Rice initiated a major effort to engage Iran and Syria in efforts to stabilize Iraq.[24] As late as April 11, 2009, Iranian officials investigating "cyber-crimes" cited Cheney's efforts in the daily newspaper Iran, specifically the "Democracy Program" [sic] initiative as parallel to a Netherlands-funded push for a "velvet revolution" accomplished by a media campaign to polarize the country, "despite the 1981 Algiers Accords signed between the U.S. and Iran in the aftermath of the U.S. embassy takeover in Tehran."[25] Her controversial business relationship with American-Iranian businessman Navid Khiabani, which led for approving export permit via European Union and Office of Foreign Assets Control for exporting high caliber Steyr Mannlicher Steyr HS .50 to Iran, caused media attention in 2005.[citation needed]

Cheney signed on in June 2007 to serve as one of three national co-chairs for Fred Thompson's 2008 presidential campaign. The other co-chairs were Spencer Abraham and George Allen. In a press release issued at the beginning of his campaign, Thompson said he was "very pleased to announce that former Senators Abraham and Allen, as well as Liz Cheney, will serve as co-chairs of my national leadership team." Thompson added: "These distinguished individuals bring wise counsel and invaluable experience to my campaign leadership team, and they will play a critical role in helping spread my consistent conservative message across America."[26] After Thompson dropped out of the race, Cheney announced on January 27, 2008 that she would work for Mitt Romney's presidential campaign, serving as a senior foreign policy advisor.[27]

In October 2009, Liz Cheney, William Kristol, and Deborah Burlingame launched, as board members, a non-profit 501(c)4 organization called Keep America Safe. The group's stated purpose is to "provide information for concerned Americans about critical national security issues".[28] The organization drew strong criticism from conservative lawyers, many of whom had worked for the Bush administration, after its campaign against "The Al Qaeda 7", seven Justice Department lawyers in the Obama administration that previously had worked as defense lawyers for Guantanamo detainees.[29] Shortly after, all public information about the organization disappeared from Internet.[30]

In January 2012, Cheney was hired as a contributor for Fox News, providing analysis for the Republican primaries and serving as substitute host of some of Fox News' programs including Hannity and Fox News Sunday.[31] She worked at Fox News for 18 months until her contract was terminated by the network in July 2013 after she announced her intention to mount a 2014 bid for the Senate in Wyoming.[32] 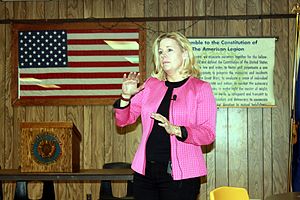 On July 16, 2013, Cheney announced that she would run for the Senate in 2014 from the state of Wyoming as a Republican, challenging the incumbent Republican senator Mike Enzi.[33] The National Republican Senatorial Committee said it would back Enzi, as was policy.[34] Cheney was expected to receive strong fundraising, but faced concerns about the fact she moved to Wyoming in fall 2012.[35] In the video announcing her candidacy, she noted that the Cheney family first came to Wyoming in 1852.[35] Her father served Wyoming in the U.S. House of Representatives from 1979 to 1989.[35]

In her first campaign appearance in Cheyenne after announcing her challenge to Enzi, Cheney said, "We have to not be afraid of being called obstructionists. Obstructing President Obama's policies and his agenda isn't actually obstruction; it's patriotism."[36] Cheney claimed that Obama had "literally declared war" on the First and Second amendments to the United States Constitution as well as the interests of Wyoming ranchers and energy workers who faced regulations from the United States Environmental Protection Agency.[36]

In August 2013, conservative Newsmax magazine named Cheney among the "25 most influential women in the GOP".[37]

Cheney's campaign was marred by criticisms from her past championing of hawkish foreign policy positions to a public spat with her sister Mary over her refusal to support same-sex marriage. Enzi's continuing popularity made it difficult for Cheney to make inroads with Wyoming Republican voters. On January 6, 2014, Cheney announced she had withdrawn from the race, citing family health issues.[9][38]

After incumbent Cynthia Lummis announced her retirement in the Fall of 2015, Cheney announced she was considering running for her seat in 2016. On February 1, 2016, Cheney announced her candidacy for Wyoming's lone seat in the U.S. House of Representatives and was widely considered the frontrunner for the seat.[39] Oil tycoon Simon Kukes contributed to her campaign.[40] She was elected with over 60% of the vote on the general election.

Cheney was sworn into office on January 3, 2017. She co-sponsored legislation that would end protection for grey wolves in the Endangered Species Act.[41] She serves on the Natural Resources Committee, Armed Services Committee, and the Rules Committee.