From Infogalactic: the planetary knowledge core
Jump to: navigation, search
This article discusses the historical region of southeastern Britain. For the literary realm of King Arthur's Britain, see Logres. 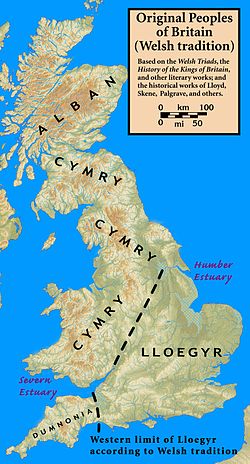 Lloegyr is the medieval Welsh name for that part of Britain south and east of a line extending from the Humber Estuary to the Severn Estuary, exclusive of Cornwall and Devon. The people of Lloegyr were called Lloegyrwys without distinction of ethnicity, the term applying to both Britons and Anglo-Saxons.

The modern form of the word is Lloegr (pronounced [ˈɬɔɨɡr̩] or [ˈɬɔiɡr̩]) and it has become generalised through the passage of time to become the Welsh word for "England" as a whole, and not restricted to its original, smaller extent. The word has been anglicised and Latinised into such forms as Logres, Logris, and Loegria, among others, and is perhaps most widely recognised as the name of King Arthur's realm in the body of literature known as the Matter of Britain. The word is known to date from the 10th century or earlier, as it appears in the literary Armes Prydein.[1]

The limit of Lloegyr has long been known to historians and writers, and is described as roughly a line from the Humber Estuary, continuing southwestwardly and connecting to the Severn Estuary. The line continues south across the estuary, crossing South West England such that Cornwall and Devon are excluded from Lloegyr.[2][3][4] The division is mentioned in literature (e.g., the Welsh Triads)[5] and is supported by the works of respected historians such as John Rhys' Celtic Britain[6] and John Edward Lloyd's A History of Wales from the Earliest Times to the Edwardian Conquest.[7]

While Geoffrey of Monmouth invented fanciful characters and places in his stories of Loegria and its eponymous king Locrinus, he also showed that he was aware that the actual boundary of Lloegyr was known to run between the Humber and Severn estuaries, and that Cornwall was distinct from Loegria.[8][9]

However, its boundaries agree quite well with limits of the Romanised part of Roman Britain. Inside those boundaries was a heritage of Romano-British society, laws, and customs that had evolved in the 350 years of Roman rule. Outside of those boundaries Roman rule was largely a matter of coexistence with the Roman military, without the same Roman contribution to local society, politics, laws, and customs.[10][11] At the end of Roman rule, there were two societies with different histories, customs, and laws, which is not to suggest any substantial difference in cultural mores.

From the time of the Roman arrival in AD 43, economic development progressed quickly, and political and social development (as opposed to military occupation) was a natural consequence.

While Rome exploited the mineral resources of Britain wherever possible, the development and implementation of industrial production was largely restricted to the southeast of Britain.[12] This was a matter of practicality, as that part of Britain contained the resources needed for industrialisation, and the lowland areas were more amenable to development than the mountainous regions to the north and west.

The reasons for a lack of industrialisation in Devon and Cornwall are unclear but probably reflect local preference, at least in part. The Dumnonii had made their peace with Rome early, and there are no indications that the Roman army campaigned against them. Their homeland was not planted with forts nor overlaid with roads, save for those needed to supervise tin production, as mineral rights belonged to the emperor and all extractions were state-sponsored and under military control.[13] In addition, the region was not central to the military control of Britain, as can be argued was the case for the territory of the Atrebates in southern coastal Britain, who had been allied with Rome prior to the invasion. Consequently, the Dumnonii probably retained a greater degree of political autonomy than the forcibly conquered tribes living to the east.

Roman rule lasted for 350 years, over which time the social and political landscape evolved to produce a society that was different from the one that had existed earlier.

Archaeology provides a measure of the level of Romanising acculturation that had occurred in Britain by the end of Roman rule, based on such things as the presence of Roman villas and towns.[10] By this measure, Romanisation was greatest in the southeast of Britain, the same region where the greatest political and economic development had occurred. The level of Romanisation was less but still substantial moving west and north, and minimal or non-existent further to the west and north. In the south, evidence of Romanisation abruptly ends east of Devon and Cornwall.[11]

Reaching back further into the past, an agreement with both the limit of 'Lloegyr' and the Romanised region of Britain can be observed in regard to the territorial limits of the pre-Roman societies of Britain.

Twentieth century archaeology and historical analysis provide a partial picture of British society in the pre-Roman Iron Age. The tribes of southeastern Britain were actively engaged in commerce with continental Europe, urbanising their societies, and minting coinage.[14][15] The same distinction between these tribes and the rest of Britain is made by historians such as Christopher Snyder (The Britons, 2003), based on both archaeological research and classical accounts such as that of Julius Caesar in describing his two invasions of Britain.[16]

It was this region that attracted Roman attention, and the invasion and the campaigns of the first Roman governor of Britain, Aulus Plautius, show that the first priority was to gain control of this region,[17] consisting of the most politically organised of the British tribes and containing the commercial wealth of the island.

That other tribes did not engage in commercial trade, or urbanise their societies, or mint coinage, is probably a combination of circumstance and choice. Their territories were more mountainous and less amenable to urbanisation, and their resources were not suitable for large-scale organised commercial trade, so these options were not available to them. However, the Dumnonii in Cornwall and Devon had substantial deposits of tin, and the Demetae in southwestern Wales were extracting gold at Dolaucothi, and both likely could have developed a commercially oriented society had they wanted to do so.

The exact origin of the word is still a matter of speculation. 12th century C.E. author Geoffrey of Monmouth offered a fanciful etymology in his Historia Regum Britanniae, deriving the names of Cambria, Loegria, and Albany from the sons of the fictional Brutus of Troy: Camber, Locrinus, and Albanactus, respectively, and makes them the eponymous kings of Wales/Cambria (Camber), England/Loegria (Locrinus), and Scotland/Albany (Albanactus). In 1982, noted linguist Eric Hamp suggested that Lloeg(y)r could be derived from a Proto-Celtic compound *(p)les-okri-s, meaning 'having a nearby border, being from near the border'.[18] Ranko Matasović prefers to see Lloegr as coming from a Brittonic collective noun *Lāikor meaning "Warriors", the root of which he proposes gave Old Irish láech "warrior" (though some scholars regard the Old Irish word as a loan from Latin laicus, "laity", "of the people"), from a Proto-Indo-European root *leh2- "war".[19] The suffix -wys found in numerous Welsh folk names, including Lloegrwys, is derived from the Latin suffix -ēnsēs.[20]

To the Welsh, Lloegyr was a foreign land with a foreign populace, distinct from the lands and peoples of the Cymry. Cymry is the Welsh word for themselves, and historically included all of the Britons living north and west of Lloegyr, south of the Scottish firths of Clyde and Forth, and not including the people of Cornwall and Devon.[21]