Lloyds Bank International is a wholly owned subsidiary of Lloyds Bank in the United Kingdom, which is in turn part of Lloyds Banking Group, one of the largest banking groups in Europe.

The bank's overseas expansion began in 1911 and the Lloyds Bank International name, historically a major international commercial bank,[1] is now used for its offshore banking interests.[2] 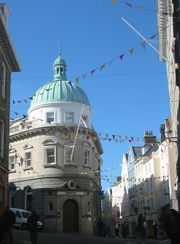 In 2013, the Amsterdam branch of Bank of Scotland also transitioned to the Lloyds Bank name, while a Berlin branch continues to trade as Bank of Scotland. The branch offers personal mortgages and acquires private savings in the Netherlands over the internet and through intermediaries. Lloyds Bank has been separately active in the Dutch commercial banking market since 1966.[4]

Lloyds Bank International (LBI), both directly and through its banking subsidiaries, BOLSA and BOLAM,[5] together with the National Bank of New Zealand, Lloyds Bank California and the colonial and foreign (later overseas) department of Lloyds Bank, was responsible for the international and foreign banking business of the Lloyds Bank group of companies from 1974 until a rationalisation of the business in 1986. At its inception, LBI employed 11,000 people of many nationalities; of this total, some 1,400 worked in the UK.[6]

In 1911, Lloyds Bank (France) was formed when the bank acquired Armstrong and Co., based in Paris and Le Havre. From 1917, it was run jointly as Lloyds and National Provincial Foreign Bank. In 1955, Lloyds Bank bought full ownership and it became Lloyds Bank (Foreign). In 1964, with branches in London, Paris, Biarritz, Bordeaux, Le Havre, Lille, Nice, Roubaix, St Jean de Luz, Cannes, Brussels, Antwerp, Geneva, Zurich and Monte Carlo and flourishing with the development of the profitable Eurodollar market, Lloyds Bank (Foreign) was renamed Lloyds Bank Europe.[7]

Bank of London and South America 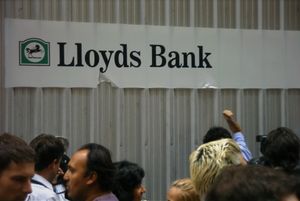 Demonstration against the Corralito, Buenos Aires, 2002.

A strong connection with Latin America began in 1918, with the acquisition of the London and River Plate Bank. The 1923 merger of this bank with the London and Brazilian Bank resulted in the Bank of London and South America. Further expansion occurred in 1936, when BOLSA took over the Anglo-South American Bank.

In 1970, BOLSA acquired full control BOLAM and, in 1971, Lloyds Bank bought the controlling interest in BOLSA and merged it with Lloyds Bank Europe to form Lloyds and Bolsa International Bank,[8] which became Lloyds Bank International in 1974, as it further strengthened its position in international markets.

In 1986, LBI's undertakings were vested in the parent Lloyds Bank by private Act of Parliament as changes in international bank taxation arrangements meant its ongoing existence no longer offered any commercial advantage.[9]

Although its foreign interests were focussed on western Europe and south America, by 1985, Lloyds Bank had offices in 45 countries worldwide. 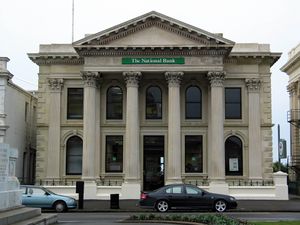 A branch of the National Bank of New Zealand in Lloyds' green livery.

The commanding presence of the National Bank was further strengthened in 1994, by the takeover of the former government-owned Rural Bank from Fletcher Challenge, making it the country's leading provider of agricultural finance. In 2003, Lloyds TSB sold the National Bank to the Australia and New Zealand Banking Group and in 2013, ANZ announced that the National Bank brand (including the black horse regardant device and colour green) would be phased out.

Lloyds Bank Canada was formed in 1986, when the bank purchased the Continental Bank of Canada. In 1990, after several years of losses, Lloyds Bank sold its Canadian operation to the Hong Kong Bank of Canada, a subsidiary of HSBC Holdings.