Local government in Scotland is organised through 32 unitary authorities[1] designated as Councils[2] which consist of councillors elected every four years by registered voters in each of the council areas.

Councils receive the majority of their funding from the Scottish Government,[3] through Aggregate External Finance (AEF). AEF consists of three parts: Revenue Support Grants, Non-Domestic Rates, and Income and Specific Grants.[4] The level of central government support for each authority is determined by the Cabinet Secretary for Finance and Sustainable Growth, currently John Swinney MSP, and is distributed by the Finance and Central Services Department of the Scottish Government. Councils obtain additional income through the Council Tax, that the council itself sets.

Scottish councils co-operate through, and are represented collectively by, the Convention of Scottish Local Authorities (COSLA).

The history of Scottish local government mainly surrounds involves the counties of Scotland. The counties have their origins in the sheriffdoms or shires over which a sheriff (a contraction of shire reeve) exercised jurisdiction.

Malcolm III appears to have introduced sheriffs as part of a policy of replacing native "Celtic" forms of government with Anglo Saxon and Norman feudal structures.[5] This was continued by his sons Edgar, Alexander I and in particular David I. David completed the division of the country into sheriffdoms by the conversion of existing thanedoms.[6][7]

From the seventeenth century the shires started to be used for local administration apart from judicial functions. In 1667 Commissioners of Supply were appointed in each sheriffdom to collect the land tax.[8] The commissioners eventually assumed other duties in the county. In 1858 police forces were established in each county under the Police (Scotland) Act 1857.

As a result of the dual system of local government, burghs (of which there were various types) often had a high degree of autonomy.

In 1975, legislation passed by the Conservative government of Edward Heath (1970–1974) introduced a system of two-tier local government in Scotland (see Local government areas of Scotland 1973 to 1996), divided between large Regional Councils and smaller District Councils. The only exceptions to this were the three Island Councils, Western Isles, Shetland and Orkney which had the combined powers of Regions and Districts. The Conservative government of John Major (1990–1997) decided to abolish this system and merge their powers into new unitary authorities. The new councils vary widely in size — some are the same as counties, such as Clackmannanshire, some are the same as former districts, such as Inverclyde and some are the same as the former regions, such as Highland. The changes took effect in 1996 with shadow councillors elected in 1995 to oversee the smooth transition of control. 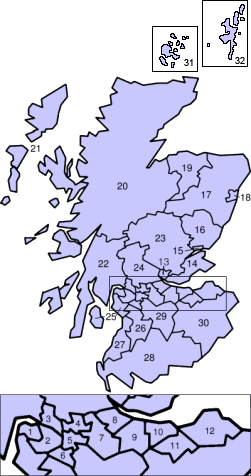 The power vested in local authorities is administered by elected councillors. There are currently 1,222, each paid a part-time salary for the undertaking of their duties. In total, there are 32 unitary authorities, the largest being the City of Glasgow with more than 600,000 inhabitants, the smallest, Orkney, with just over 20,000 people living there (population of 21,570 in 2013).[9]

Councillors are subject to a Code of Conduct instituted by the Ethical Standards in Public Life etc. (Scotland) Act 2000 and enforced by the Standards Commission for Scotland.[10] If a person believes that a councillor has broken the code of conduct they make a complaint to the Office of the Chief Investigating Officer (CIO). The CIO makes a determination on whether there is a need for an investigation, and then whether or not to refer the matter to the Standards Commission.[11]

Each council elects a Convener and Depute Convener to chair meetings of the Council and to act as a figurehead for the area. In the four city councils in Scotland - Glasgow, Edinburgh, Aberdeen and Dundee - the Convener is called a Lord Provost, whilst in other councils the council may choose the title given to the Convener.[12] Most councils use the term 'Provost'.

The office of Provost or Convener is roughly equivalent to that of a Mayor in other parts of the United Kingdom. Traditionally these roles are ceremonial and have no significant administrative functions. Lord Provosts in the four city councils have the additional duty of acting as Lord Lieutenant for their respective city.

Leader of the Council

Each political group within the council typically appoints a leader, with the largest grouping's leader becoming 'Leader of the Council', and being the central figure of de facto political authority.

Officers of a council are administrative, non-political staff of the council. Generally the composition of the council's officers are a matter for the council, but there are a number of statutory officers whose roles are defined by central government.

The most significant of these officers is the Head of Paid Service, usually titled the Chief Executive. The Chief Executive is similar in function to a city manager, though certain councillors have executive authority and there is no clear division of powers.[14]

There is also a statutory Monitoring Officer, who usually heads the Legal Services division of the council, as well as a Chief Financial Officer.[14]

Follow the introduction of the Local Governance (Scotland) Act 2004 local elections are held using the single transferable vote, with this taking place for the first time in 2007. This change in voting system saw all but five councils end up with no one party in control. Labour retained control of the City of Glasgow and North Lanarkshire, while Orkney, Shetland and Na h-Eileanan Siar continue to be controlled by Independent councillors.

The results are summarised below. Further analysis can be found on the page Scottish council elections, 2007

The 32 unitary authorities are controlled as follows. The figures incorporate the results from the 2007 local government election, plus gains and losses from subsequent local by-elections, and party defections.

Community councils represent the interests of local people. Local authorities have a statutory duty to consult community councils on planning, development and other issues directly affecting that local community. However, the community council has no direct say in the delivery of services. In many areas they do not function at all, but some work very effectively at improving their local area. Elections for community councils are determined by the local authority but the law does state that candidates cannot stand on a party-political ticket.