The Lockheed Constellation ("Connie") was a propeller-driven, four-engined airliner that was built by Lockheed Corporation between 1943 and 1958 at Burbank, California.

Lockheed built 856 in numerous models—all with the same triple-tail design and dolphin-shaped fuselage. Most were powered by four 18-cylinder Wright R-3350 Duplex-Cyclones. The Constellation was used as a civil airliner and as a military and civil air transport, seeing service in the Berlin Airlift and the Biafran airlift. It was the presidential aircraft for Dwight D. Eisenhower.

Lockheed had been working on the L-044 Excalibur, a four-engine pressurized airliner, since 1937. In 1939 Trans World Airlines, at the instigation of major stockholder Howard Hughes, requested a 40-passenger transcontinental airliner with 3,500 mi (5,630 km) range[1]—well beyond the capabilities of the Excalibur design. TWA's requirements led to the L-049 Constellation, designed by Lockheed engineers including Kelly Johnson and Hall Hibbard.[2] Willis Hawkins, another Lockheed engineer, maintains that the Excalibur program was purely a cover for the Constellation.[3] 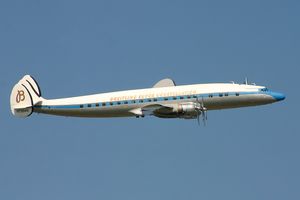 Development of the Constellation

The Constellation's wing design was close to that of the P-38 Lightning, differing mostly in size.[4] The triple tail kept the aircraft's height low enough to fit in existing hangars,[3] while features included hydraulically boosted controls and a de-icing system used on wing and tail leading edges.[1] The aircraft had a maximum speed of over 375 mph (600 km/h), faster than that of a Japanese Zero fighter, a cruise speed of 340 mph (550 km/h), and a service ceiling of 24,000 ft (7,300 m).[5]

According to Anthony Sampson in Empires of the Sky, Lockheed may have undertaken the intricate design, but Hughes' intercession in the design process drove the concept, shape, capabilities, appearance, and ethos.[6] These rumors were discredited by Johnson. Howard Hughes and Jack Frye confirmed that the rumors were not true in a letter in November 1941.[7]

The famous 1953-54 Studebaker coupe, generally considered one of the most beautiful American automobile designs, was inspired in part by the design of the Constellation, according to its principal designer, Robert Bourke.[citation needed] 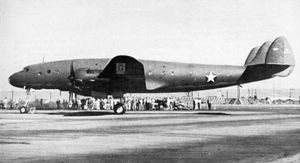 The first Lockheed Constellation on January 9, 1943.

With the onset of World War II, the TWA aircraft entering production were converted to an order for C-69 Constellation military transport aircraft, with 202 aircraft intended for the United States Army Air Forces (USAAF). The first prototype (civil registration NX25600) flew on January 9, 1943, a short ferry hop from Burbank to Muroc Field for testing.[1] Edmund T. "Eddie" Allen, on loan from Boeing, flew left seat, with Lockheed's own Milo Burcham as copilot. Rudy Thoren and Kelly Johnson were also on board.

The C-69 was mostly used as a high-speed, long-distance troop transport during the war.[9] A total of 22 C-69s were completed before the end of hostilities, but not all of these entered military service. The USAAF cancelled the remainder of the order in 1945. However, some aircraft remained in USAF service into the 1960s, serving as passenger ferries for the airline that relocated military personnel, and carrying the livery of MATS (the Military Air Transport System). At least one of these airplanes had passenger seats installed backward, with occupants facing toward the rear of the direction of travel during flight. 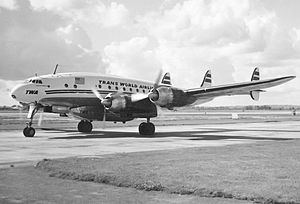 After World War II the Constellation came into its own as a fast civil airliner. Aircraft already in production for the USAAF as C-69 transports were finished as civil airliners, with TWA receiving the first on 1 October 1945. TWA's first transatlantic proving flight departed Washington, DC, on December 3, 1945, arriving in Paris on December 4 via Gander and Shannon.[1]

Trans World Airlines transatlantic service started on February 6, 1946 with a New York-Paris flight in a Constellation. On June 17, 1947 Pan American World Airways opened the first ever scheduled round-the-world service with their L-749 Clipper America. The famous flight "Pan Am 1" operated until 1982.

Sleek and powerful, Constellations set a number of records. On April 17, 1944, the second production C-69, piloted by Howard Hughes and TWA president Jack Frye, flew from Burbank, California, to Washington, D.C., in 6 hours and 57 minutes (c. 2,300 miles (3,700 km) at an average 331 miles per hour (533 km/h)). On the return trip, the aircraft stopped at Wright Field to give Orville Wright his last flight, more than 40 years after his historic first flight. He commented that the Constellation's wingspan was longer than the distance of his first flight.[2] 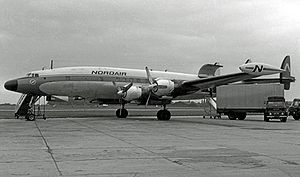 The advent of jet airliners such as the de Havilland Comet, Boeing 707, Douglas DC-8 and Convair 880, rendered the piston-engined Constellation obsolete. The first routes lost to jets were the long overseas routes, but Constellations continued to fly domestic routes. The last scheduled passenger flight in the lower 48 states was made by a TWA L749 on May 11, 1967, from Philadelphia to Kansas City, Missouri.[10] Constellations carried freight in later years, and were used on backup sections of Eastern Airlines' shuttle service between New York, Washington, and Boston until 1968. Many old propeller airliners were used on overnight freight runs, even into the 1990s, as their low speed was not an impediment. An Eastern Constellation to date still holds the record for a New York to Washington flight from liftoff to touchdown in just over 30 minutes. The record was set prior to speed restrictions by the FAA below 10,000 ft.[11]

One of the reasons for the elegant appearance of the aircraft was the fuselage shape—a continuously variable profile with no two bulkheads the same shape. Unfortunately, this construction was very expensive and was replaced by the mostly tube-shape of modern airliners. The tube is more resistant to pressurization changes and cheaper to build.

With the shutdown of Constellation production, Lockheed elected not to develop a first-generation jetliner, instead sticking to its lucrative military business and production of the modest turboprop-powered Lockheed L-188 Electra airliner. Lockheed would not build a large civil passenger aircraft again until its L-1011 Tristar debuted in 1972. While a technological marvel, the L-1011 was a commercial failure, and Lockheed left the commercial airliner business permanently in 1983.[12] 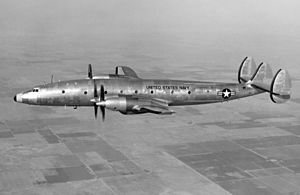 After TWA's initial order was filled following World War II, customers rapidly accumulated, with over 800 aircraft built. In military service, the U.S. Navy and Air Force operated the EC-121 Warning Star variant until 1978, nearly 40 years after work on the L-049 began. Cubana de Aviación was the first airline in Latin America to operate Super Constellations. Pakistan International Airlines was the first airline from an Asian country to fly the Super Constellation. 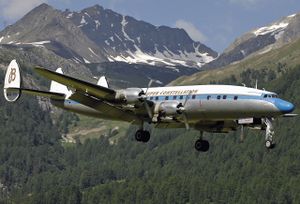 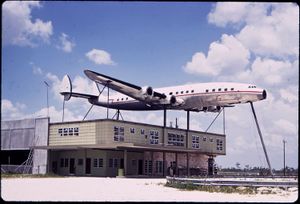 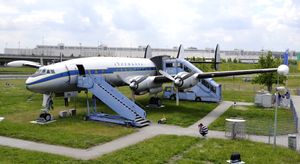 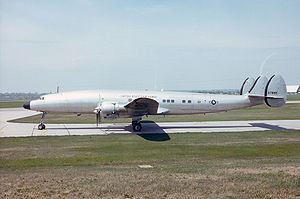 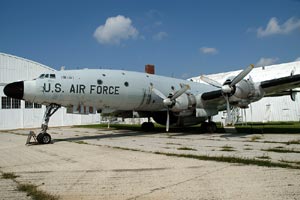 N4257U on display at the Combat Air Museum in Topeka, Ks.