The Lockheed D-21 was an American reconnaissance drone with maximum speed in excess of Mach 3. The D-21 was initially designed to be launched from the back of a M-21 carrier aircraft, a variant of the Lockheed A-12 aircraft. Development began in October 1962. Originally known by the Lockheed designation Q-12, the drone was intended for reconnaissance deep in enemy airspace.

The D-21 was designed to carry a single high-resolution photographic camera over a preprogrammed path, then release the camera module into the air for retrieval, after which the drone would self-destruct.[1] Following a fatal accident when launched from an M-21, the D-21 was modified to be launched from a Boeing B-52 Stratofortress. Several test flights were made, followed by four unsuccessful operational D-21 flights over the People's Republic of China, and the program was canceled in 1971.

In the 1960s Lockheed's secret Skunk Works developed the Mach 3 A-12 reconnaissance aircraft for the Central Intelligence Agency (CIA). After the shooting down of the U-2 piloted by Gary Powers in 1960, a number of different concepts were proposed as alternatives. Kelly Johnson, the leader of Skunk Works, developed the concept of a long-range drone that used much of the A-12's technology. In October 1962 the CIA and the US Air Force instructed Lockheed to study a high-speed, high-altitude drone concept. Johnson specified speeds of Mach 3.3–3.5, an operational altitude of 87,000–95,000 feet (27,000–29,000 m), and a range of 3,000 nautical miles (3,500 mi; 5,600 km). It was intended to make a one-way trip, eject its camera payload at the end of the mission for recovery, then self-destruct.[2] It had a double-delta wing similar to the A-12's wing design. The Q-12 was to be air-launched from the back of an A-12, and used key technology from the A-12 project, including titanium construction and radar cross-section reduction design features.[3] 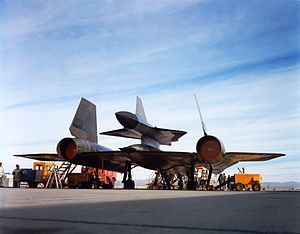 Rear view of the D-21/M-21 combination on the ground, showing the exhaust shroud used on early flights

Johnson wanted to power the Q-12 with a ramjet engine built by Marquardt for the Boeing CIM-10 Bomarc long-range surface-to-air missile. Marquardt and Lockheed had already collaborated on several programs and had a close working relationship. The engine, the RJ43-MA-11, required modification, since it was only designed to burn as long as the missile needed to hit a target, while the Q-12's engine needed to operate at high temperatures for at least an hour and a half at high altitudes. The modified engine was designated as the RJ43-MA20S-4.[2]

A full-scale mockup of the Q-12 was ready by 7 December 1962, and had already undergone preliminary tests to measure its radar cross-section. Marquardt had also successfully tested the modified RJ-43 in its wind tunnel in the meantime.[4] However, the CIA was not enthusiastic about the Q-12, mostly because the agency was overextended at the time with U-2 missions, getting the A-12 up to speed, and covert operations in Southeast Asia. The Air Force, however, was interested in the Q-12 as both a reconnaissance platform and a cruise missile, and the CIA finally decided to work with the USAF to develop the new drone. Lockheed was awarded a contract in March 1963 for full-scale development of the Q-12.[3]

The camera and its film magazines with an inertial navigation system were carried in a cramped "Q-bay" below the drone's air intake. These components were built into a module that fit into the bay and was known as a "hatch". The hatch would be ejected at the end of the mission and then snagged out of the air by a JC-130 Hercules, a technique that had been developed by the Air Force to recover film canisters from satellites. If the C-130 missed, the hatch was equipped with flotation devices so it could be recovered by ship if released over water. Honeywell built the avionics systems; new construction techniques and materials had to be developed for the systems to withstand the high temperatures, extreme vibrations, and lack of space in the D-21.[5] 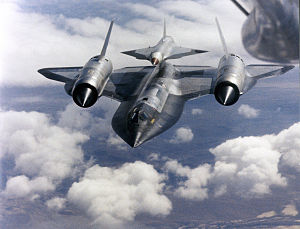 A D-21 mounted on an M-21 began captive flight-testing on 22 December 1964. Aerodynamic covers were initially placed over the D-21's intake and exhaust to reduce drag, but had to be removed after the first few tests, as no way of discarding them at Mach 3 without damaging the drone or carrier plane could be devised.[7]

The fourth and final launch from an M-21 on 30 July ended in disaster. Unlike the three previous launches this one was performed straight and level, not in an outside loop to assist in the separation of the drone from the aircraft. The D-21 suffered engine problems and struck the M-21's tail after separation, leading to the destruction of both aircraft. The two crew ejected and landed at sea. The pilot, Bill Park, survived, but the Launch Control Officer, Ray Torick, drowned.[10][11] 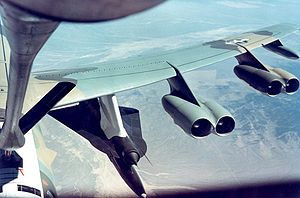 Following the accident, Johnson suggested launching the D-21 from the very large Boeing B-52 Stratofortress bomber, and adding a solid rocket booster to get it up to speed.[12] The drone was modified by adding attachment points on its spine to mate with the carrying pylon on the B-52 and its belly attachment points were adapted to accommodate the rocket booster necessary to increase its speed and allow its ramjet to operate. Its vertical stabilizer was increased in size by approximately 20%. The modified drone version was designated D-21B (there was no -21A). Two B-52Hs were modified to carry a pair of drones each by means of two large underwing pylons that replaced the smaller pylons used for the AGM-28 Hound Dog cruise missiles. The tail gunner's and electronic warfare officer's stations were replaced with two launch control stations. Command and telemetry systems were added, and high-speed cameras were installed to track the drones as they separated from the pylons. The launch control officer on the B-52H could communicate with the D-21Bs, and could make it self-destruct.[13] 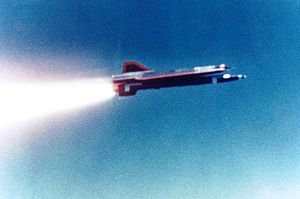 A D-21B being launched, illustrating the size of the booster relative to the drone.

The solid-fuel booster was both larger and heavier than the drone; it was 44 feet 4 inches (13.5 m) long and weighed 13,286 pounds (6,030 kg). It had a folding tail fin on the bottom to stabilize it while the rocket was firing. The booster had a burn time of 87 seconds and a thrust of 27,300 pounds-force (121 kN).[14] During ground handling everyone within 25 feet (7.6 m) was required to wear anti-static straps to prevent any discharge of static electricity that might ignite the booster.[15]

The first attempted launch of a D-21B was on 28 September 1967, but the drone fell off the B-52's launch pylon due to a stripped nut on the pylon before the aircraft reached its intended launch point. Johnson admitted that the incident was "very embarrassing". Three more launches were performed from November 1967 through January 1968. None were completely successful, so Johnson ordered his team to conduct a thorough review before renewing launch attempts.[16] The next launch was on 10 April 1968. It also failed as the engine did not ignite. On 16 June the D-21B finally made a completely successful flight; it flew at the specified altitude and course for its full range, and the hatch was recovered.[17] The next two launches were failures, followed by another successful flight in December. A test in February 1969 to check the inertial navigation system with an actual mission profile was a failure. The next two flights in May and July succeeded.[18] 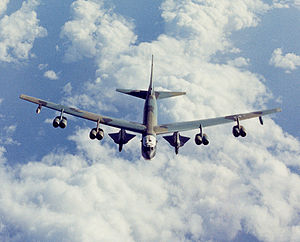 The same B-52 photographed from farther away, showing both drones.

Four operational missions with the D-21B took place under the codename of Senior Bowl. These were conducted over the People's Republic of China from 9 November 1969 to 20 March 1971 to spy on the Lop Nor nuclear test site. The USAF's 4200th Support Squadron, based at Beale Air Force Base, California, flew the missions, usually from Andersen Air Force Base in Guam.[19]

The Chinese never spotted the D-21B. The first one failed to turn around and continued straight on, crashing somewhere in the Soviet Union.[20] Another test flight was conducted on 20 February 1970 in a successful attempt to correct any problems. The second operational mission, however, was not until 16 December 1970. The D-21B reached Lop Nor and back to the recovery point, but the hatch had a partial parachute failure and was lost at sea with its photographs.[17]

During the third operational mission, on 4 March 1971, the D-21B flew to Lop Nor and returned, and released the hatch, which deployed its parachute, but the midair recovery failed and the hatch fell into the water. The destroyer that tried to retrieve the hatch ran it down and it sank. The fourth, and last, operational flight of the D-21B was on 20 March 1971. It was lost over China on the final segment of the route over China's Yunnan province;[21] wreckage was found by local authorities. In 2010, after being in the junkyard of China Aviation Museum for years, the wreckage was moved to the exhibition area.[22]

On 23 July 1971, the D-21B program was canceled due to its poor success rate, the introduction of a new generation of photo reconnaissance satellites, and President Richard Nixon's rapprochement with China.[23] A total of 38 D-21 and D-21B drones had been built, 21 of which were expended in launches. The remaining 17 were initially stored at Norton Air Force Base, California, then moved to Davis-Monthan Air Force Base "boneyard" near Tucson, Arizona,[24] in 1976 and 1977. With the base open to the public, the D-21 drones were quickly spotted and photographed. The Air Force called them GTD-21Bs with the GT standing for Ground Training.[25]

The fate of the D-21 that had disappeared on the first operational flight was finally revealed in February 1986 when an official from the CIA returned a panel to Ben Rich that he had been given by a Soviet KGB agent. The drone had self-destructed over Siberia and the Soviets had recovered the wreckage.[26] The Tupolev design bureau reverse-engineered the wreck and produced plans for a Soviet copy, named the Voron (Raven), but it was never built.[27]

In the late 1990s NASA considered using a D-21 to test a hybrid "rocket-based combined cycle" engine, which operates as a ramjet or rocket, depending on its flight regime. Ultimately NASA used a derivative of the agency's X-43A hypersonic test vehicle for the experiments.[28] 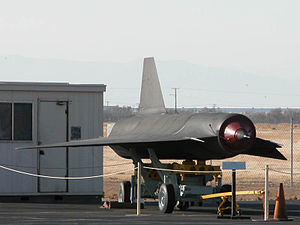 D-21 on display at the Blackbird Airpark, Air Force Plant 42, Palmdale, California
File:MD-21 Blackbird rearview.jpg
A close-up rear view of D-21 on M-21 at the Museum of Flight in Seattle
File:Lockheed D21a and M21.jpg
SR-71 and D-21 at the Pima Air & Space Museum, Tucson, Arizona