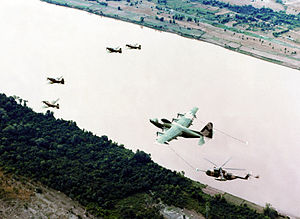 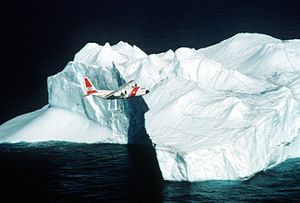 The Lockheed HC-130 is an extended-range, search and rescue (SAR)/combat search and rescue (CSAR) version of the C-130 Hercules transport. The HC-130H and HC-130J versions are operated by the United States Coast Guard in a SAR and maritime reconnaissance role. The HC-130P Combat King and HC-130J Combat King II models are operated by the United States Air Force for long-range SAR and CSAR. The USAF variants also execute on scene CSAR command and control, airdrop pararescue forces and equipment, and are also capable of providing aerial refueling to appropriately equipped helicopters in flight. In this latter role, they are primarily used to extend the range and endurance of combat search and rescue helicopters.

In July of 2015 it was announced that the U.S. Forest Service will be getting some of the HC-130H aircraft from the U.S. Coast Guard to use as aerial fire retardant drop tankers.

The United States Coast Guard was the first recipient of the HC-130 variant. In keeping with the USN/USMC/USCG designation system of the time, the designation for the first order in 1958 was R8V-1G, but with the introduction of the Tri-Service aircraft designation system for commonality with the US Army and USAF in 1962, this was eventually changed to HC-130B.[3] Six USCG HC-130E aircraft were produced in 1964,[4] but production soon switched to the new C-130H platform which was entering service. The first HC-130H flew on 8 December 1964 and[5] the USCG still operates this aircraft.

First flown in 1964, the USAF HC-130P Combat King aircraft has served many roles and missions. Based on the USAF C-130E airframe, it was modified to conduct search and rescue missions, provide a command and control platform, conduct in-flight refueling of helicopters, and carry supplemental fuel in additional internal cargo bay fuel tanks for extending range or air refueling. They were also originally modified to employ the Fulton surface-to-air recovery system, although this system has since been discontinued and the specialized equipment removed. The HC-130N was a follow-up order without the Fulton recovery system and all USAF extant HC-130Ps have since had their Fulton recovery systems removed.

The USAF HC-130P/N, also known as the Combat King aircraft, can fly in the day against a reduced threat; however, crews normally fly night, low-level, air refueling and airdrop operations using night vision goggles (NVG). The aircraft can routinely fly low-level NVG tactical flight profiles to avoid detection. To enhance the probability of mission success and survivability near populated areas, USAF HC-130 crews employ tactics that include incorporating no external lighting or communications and avoiding radar and weapons detection.

The MC-130P Combat Shadow series of aircraft initially entered service in December 1965 during the Vietnam War as the HC-130H CROWN airborne controller. The CROWN airborne controllers located downed aircrew and directed Combat Search and Rescue operations over North Vietnam. In mid-1966 flight testing began of rescue helicopters equipped with aerial refueling receivers, and 11 of the controller aircreft were modified as tankers and redesignated the HC-130P SAR Command and Control/vertical lift (helicopter) aerial refueling aircraft, entering service in Southeast Asia in November 1966. Originally assigned to the Tactical Air Command (TAC) and then the Military Airlift Command (MAC), Combat Shadows have been part of the Air Force Special Operations Command (AFSOC) since that command's establishment in 1993. In February 1996, AFSOC's 28-aircraft tanker fleet was redesignated the MC-130P Combat Shadow, aligning the variant with AFSOC's other M-series special operations mission aircraft.[6][7] At the same time as this redesignation, USAF continued to field HC-130P/N aircraft as dedicated CSAR platforms under the Air Combat Command (ACC).

The new HC-130J aircraft are derived from the Lockheed Martin KC-130J tanker operated by the U.S. Marine Corps.[8] The USCG has six HC-130Js in service, but they are not capable of refueling helicopters in flight. The first delivery of this variant to the United States Coast Guard was in October 2003.[9] They initially operated in a logistic support role until they received significant modifications, including installations of a large window on each side of the fuselage to allow crew members to visually scan the sea surface, the addition of an inverse synthetic aperture sea search radar, flare tubes, a forward-looking infrared/electro-optical sensor, a gaseous oxygen system for the crew and an enhanced communications suite. The first of these modified Coast Guard HC-130Js was delivered in March 2008.[10]

Lockheed Martin officials conducted the first flight of the USAF HC-130J version on 29 July 2010.[11] The first HC-130J was delivered to the USAF in September 2010,[12] but will undergo further testing before achieving Initial Operational Capability (IOC) in 2012.

The HC-130J personnel recovery aircraft completed developmental testing on 14 March 2011. The final test point was air-to-air refueling, and was the first ever boom refueling of a C-130 where the aircraft’s refueling receiver was installed during aircraft production. This test procedure also applied to the MC-130J Combat Shadow II aircraft in production for Air Force Special Operations Command.[13]

Given the advancing age of its current HC-130 airframes, all of which are based on the venerable C-130E airframe, the Air Force plans to eventually buy up to 78 HC-130J Combat King IIs to equip rescue squadrons in the active Air Force, the Air Force Reserve Command and the Air National Guard.[14] The first HC-130J was delivered to the 563d Rescue Group at Davis-Monthan Air Force Base, Arizona on 15 November 2012.[15] 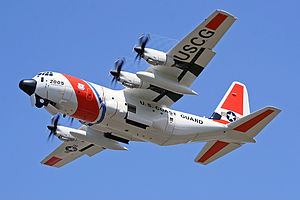 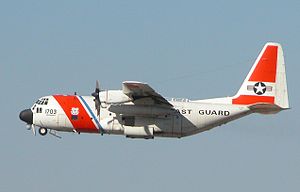 Neither the HC-130H nor the HC-130J in their U.S. Coast Guard variants are equipped for the aerial refueling of helicopters.

The HC-130P (to include HC-130P/N) is primarily based on the C-130E airlift aircraft, with a smaller number based on the C-130H. The USAF HC-130J is a newly manufactured aircraft. As the dedicated fixed-wing combat search and rescue platform in the USAF inventory, the HC-130 is operated by the following units:

HC-130s were assigned to the Air Combat Command (ACC) from 1992 to 2003, to include those Air Force Reserve Command and Air National Guard rescue units operationally-gained by ACC. Prior to 1992, they were assigned to the Air Rescue Service as part of Military Airlift Command (MAC). In October 2003, operational responsibility for the Continental United States (CONUS) and Alaskan air search and rescue (SAR) mission, as well as the world-wide combat search and rescue (CSAR) mission was transferred to the Air Force Special Operations Command (AFSOC) at Hurlburt Field, Florida.

In October 2006, all USAF CSAR forces were reassigned back to Air Combat Command with the exception of those Alaska Air National Guard CSAR assets which were transferred to the operational claimancy of Pacific Air Forces (PACAF). The CONUS and Alaska SAR missions were also transferred back to ACC and PACAF, respectively. However, the Air Force Rescue Coordination Center (AFRCC) that had been previously located at McClellan Air Force Base, California and Scott Air Force Base, Illinois under MAC and at Langley Air Force Base, Virginia under ACC, was relocated to Tyndall Air Force Base, Florida under the control of 1st Air Force (1 AF), the USAF component command to U.S. Northern Command (USNORTHCOM) and ACC's numbered air force for the Air National Guard.

There are 13 HC-130 aircraft operated by the Air National Guard, and 10 by the Air Force Reserve Command.[21]

On 20 February 1972, Lieutenant Colonel Edgar Allison, USAF, and his flight crew set a recognized turboprop aircraft class record of 8,732.09 miles (14,052.94 km) for a great circle distance without landing. The USAF Lockheed HC-130H was flown from Ching Chuan Kang Air Base, Republic of China (Taiwan), to Scott AFB, Illinois in the United States. As of 2015, this record still stands more than 40 years later.[22][23]