From Infogalactic: the planetary knowledge core
Jump to: navigation, search
For the former companies, see Lockheed Corporation and Martin Marietta.

Lockheed Martin (NYSE: LMT) is an American global aerospace, defense, security and advanced technologies company with worldwide interests. It was formed by the merger of Lockheed Corporation with Martin Marietta in March 1995. It is headquartered in Bethesda, Maryland, in the Washington, DC, area. Lockheed Martin employs 116,000 people worldwide. Marillyn Hewson is the current President and Chief Executive Officer.

Lockheed Martin operates in five business segments: Aeronautics, Information Systems & Global Solutions, Missiles and Fire Control, Mission Systems and Training, and Space Systems.[1] The company received the Collier Trophy six times, including in 2001 for being part of developing the X-35/F-35B LiftFan Propulsion System,[7][8][9] and most recently in 2006 for leading the team that developed the F-22 Raptor fighter jet. Lockheed Martin is currently developing the F-35 Lightning II and leads the international supply chain, leads the team for the development and implementation of technology solutions for the new USAF Space Fence (AFSSS replacement), [10] and is the primary contractor for the development of the Orion Spacecraft command module.[11] The company also invests in healthcare systems, renewable energy systems, intelligent energy distribution and compact nuclear fusion.[12]

Merger talks between Lockheed Corporation and Martin Marietta began in March 1994, with the companies announcing their $10 billion planned merger on August 30, 1994.[13] The deal was finalized on March 15, 1995, when the two companies' shareholders approved the merger.[14] The segments of the two companies not retained by the new company formed the basis for the present L-3 Communications, a mid-size defense contractor in its own right. Lockheed Martin also later spun off the materials company Martin Marietta Materials.

On April 22, 1996, Lockheed Martin completed the acquisition of Loral Corporation's defense electronics and system integration businesses for $9.1 billion, the deal having been announced in January. The remainder of Loral became Loral Space & Communications.[15]

Lockheed Martin abandoned plans for a $8.3 billion merger with Northrop Grumman on July 16, 1998, due to government concerns over the potential strength of the new group; Lockheed/Northrop would have had control of 25% of the Department of Defense's procurement budget.[16]

For the Mars Climate Orbiter, Lockheed Martin provided NASA with measurements in US Customary force units when metric was expected, resulting in the loss of the Orbiter at a cost of $125 million.[17][18] The cost for spacecraft development was $193.1 million.[19] 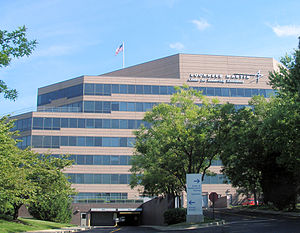 In 2001, Lockheed Martin won the contract to build the F-35 Lightning II; this was the largest fighter aircraft procurement project since the F-16, with an initial order of 3,000 aircraft.

In 2001, Lockheed Martin settled a nine–year investigation conducted by NASA's Office of Inspector General with the assistance of the Defense Contract Audit Agency. The company paid the United States government $7.1 million based on allegations that its predecessor, Lockheed Engineering Science Corporation, submitted false lease costs claims to NASA.[22]

On August 31, 2006, Lockheed Martin won a $3.9 billion contract from NASA to design and build the CEV capsule, later named Orion for the Ares I rocket in the Constellation Program. In 2009, NASA reduced the capsule crew requirements from the initial six seats to four for transport to the International Space Station.[24]

On August 13, 2008, Lockheed Martin acquired the government business unit of Nantero, Inc., a company that had developed methods and processes for incorporating carbon nanotubes in next-generation electronic devices.[25][26] In 2009, Lockheed Martin bought Unitech.[27]

On November 18, 2010, Lockheed Martin announced that it would be closing its Eagan, Minnesota location by 2013 to reduce costs and optimize capacity at its locations nationwide.[28]

In January 2011, Lockheed Martin agreed to pay the US Government $2 million to settle allegations that the company submitted false claims on a U.S. government contract for that amount. The allegations came from a contract with the Naval Oceanographic Office Major Shared Resource Center in Mississippi.[29]

On May 25, 2011 Lockheed Martin bought the first Quantum Computing System from D-Wave Systems. Lockheed Martin and D-Wave will collaborate to realize the benefits of a computing platform based upon a quantum annealing processor, as applied to some of Lockheed Martins most challenging computation problems. Lockheed Martin established a multi-year contract that includes one system, maintenance and services. Potentially an important milestone for both companies.[30]

On May 28, 2011 it was reported that a cyber-attack using previously stolen EMC files had broken through to sensitive materials at the contractor.[31] It is unclear if the Lockheed incident is the specific prompt whereby on June 1, 2011, the new United States military strategy, makes explicit that a cyberattack is casus belli for a traditional act of war.[32]

On July 10, 2012, Lockheed Martin announced it was cutting its workforce by 740 workers to reduce costs and remain competitive as necessary for future growth.[33]

On August 2, 2012, the Vice President for Business Development, George Standridge stated that his company has offered 6 more C-130J aircraft to the Indian Air Force, for which discussions are underway with the Indian Government.[34]

On January 7, 2013, Lockheed Martin Canada announced that it will be acquiring the engine maintenance, repair and overhaul assets from Aveos Fleet Performance in Montreal, Canada.

On July 3, 2013, Lockheed Martin announced that it was partnering with DreamHammer to use the company's software for integrated command and control of its unmanned aerial vehicles.[36]

Lockheed Martin teamed up with Bell Helicopter to propose the V-280 Valor tiltrotor for the Future Vertical Lift (FVL) program.[37]

In September 2013, Lockheed Martin acquired the Scotland-based tech firm, Amor Group, saying the deal would aid its plans to expand internationally and into non-defence markets.[38]

On November 14, 2013, Lockheed announced they would be closing their Akron, Ohio facility laying off 500 employees and transferring other employees to other locations.[39]

On June 2, 2014 Lockheed Martin received a Pentagon contract to build a space fence that would track debris, keeping it from damaging satellites and spacecrafts.[42]

On July 20, 2015, Lockheed Martin announced plans to the purchase of the Sikorsky Aircraft from United Technologies Corporation at a cost of $7.1 billion.[44][45] The Pentagon has criticized the acquisition as causing a reduction in competition.[46] In November 2015, the acquisition received final approval from the Chinese government,[47] with a total cost of $9 billion.[48] Dan Schulz was named the president of Lockheed Martin's Sikorsky company.[49]

Lockheed Martin has shown[when?] sketches for a twin-engine, blended wing body strategic airlifter similar in size to the C-5.[50]

In December 2015, Lockheed won a $867 million seven-year contract to train Australia’s next generation of military pilots. There is also an option in the deal to extend this contract across 26 years which would greatly increase the deal’s value.[51]

On March 3, 2012, the U.S. Justice Department said that Lockheed Martin had agreed to settle allegations that the defense contractor had sold overpriced perishable tools used on many contracts. The DoJ said the allegations were based specifically on the subsidiary Tools & Metals Inc's inflation of costs between 1998 and 2005, which Lockheed Martin then passed on to the U.S. government under its contracts. Further, in March 2006, Todd B. Loftis, a former TMI president, was sentenced to 87 months in prison and ordered to pay a fine of $20 million following his guilty plea.[52]

On the February 20, 2013 Lockheed Martin Corp complied with the U.S. District Court in New York, agreeing to pay a $19.5 million lawsuit to conclude a securities fraud class-action legal battle that had accused the company of deceiving shareholders in regards to expectations for the company's information technology division.[53]

On December 20, 2014, Lockheed Martin Integrated Systems agreed to settle a False Claims Act lawsuit paying $27.5 million to finalize allegations that it had knowingly overbilled the taxpayer for work performed by company staff who did not hold the relevant, essential qualifications for the contract.[54]

In 2013, Lt. Gen. Christopher Bogdan criticized the company's F-35 fighter jet program. The general said: "I want them both to start behaving like they want to be around for 40 years...I want them to take on some of the risk of this program. I want them to invest in cost reductions. I want them to do the things that will build a better relationship. I'm not getting all that love yet."[55] The criticism comes in the wake of previous criticism from former Defense Secretary Robert Gates regarding the same program.[56] 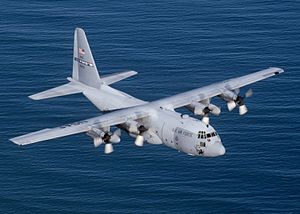 C-130 Hercules; in production since the 1950s, now as the C-130J
File:CF-1 flight test.jpg
Naval variant of the Lockheed Martin F-35 Lightning II 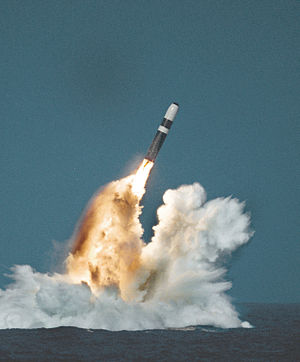 Lockheed Martin received $36 billion in government contracts in 2008 alone, more than any company in history. It does work for more than two dozen government agencies from the Department of Defense and the Department of Energy to the Department of Agriculture and the Environmental Protection Agency. It's involved in surveillance and information processing for the CIA, the FBI, the Internal Revenue Service (IRS), the National Security Agency (NSA), The Pentagon, the Census Bureau and the Postal Service."[59]

In October 2013, Lockheed announced it expected to finalise a $2.2 billion contract with the United States Air Force for two advanced military communications satellites.[60]

The board of directors consists of 14 members. Notable members include:

Chairman of the board

Lockheed Martin is listed as the largest U.S. government contractor and "ranks third for number of incidents, and twenty-first for size of settlements on the 'contractor misconduct' database maintained by the Project on Government Oversight, a Washington, D.C.-based watchdog group."[59] Since 1995, the company has agreed to pay $606 million to settle 59 instances of misconduct.[61]

According to the magazine Politico, Lockheed Martin has "a political network that is already the envy of its competitors", and its contracts enjoy wide bipartisan support in the U.S. Congress thanks to it having "perfected the strategy of spreading jobs on weapons programs in key states and congressional districts".[62] The company's 2010 lobbying expenditure by the third quarter was $9.9 million (2009 total: $13.7 million).[63][64]

Through its political action committee (PAC), the company provides low levels of financial support to candidates who advocate national defense and relevant business issues.[65] It is "the top contributor to the incoming House Armed Services Committee chairman, Republican Buck McKeon of California, giving more than $50,000 in the most recent election cycle. It also topped the list of donors to Sen. Daniel Inouye (D-HI), the chair of the Senate Appropriations Committee before his death in 2012."[59]

Lockheed Martin Employees Political Action Committee is one of the 50 largest in the country, according to FEC data. With contributions from 3,000 employees, it donates $500,000 a year to about 260 House and Senate candidates. For the 2004 election cycle,[clarification needed] Lockheed's PAC contributed $350,279 to federal candidates, with about 62 percent going to Republicans, according to the Center for Responsive Politics. That compares with $515,000 from General Dynamics' political action committee and $122,850 from BAE Systems North America, the center's data showed.[66]

Senior management consists of the CEO, COO and CFO, and Executive Vice Presidents (EVP) of five business areas.[67] The EVPs are responsible for managing major programs.

Tier2 Functional Leads and Tier3 IPT Leads report to Tier1. IPT leads are responsible for entire systems or products defined by the contract’s Statement of Work.[73]

The Double Helix methodology is a systems development methodology used by Lockheed Martin. It combines experimentation, technology, and a warfighter's concept of operations to create new tactics and weapons.[77]