The Lockheed Martin X-33 was an unmanned, sub-scale technology demonstrator suborbital spaceplane developed in the 1990s under the U.S. government-funded Space Launch Initiative program. The X-33 was a technology demonstrator for the VentureStar orbital spaceplane, which was planned to be a next-generation, commercially operated reusable launch vehicle. The X-33 would flight-test a range of technologies that NASA believed it needed for single-stage-to-orbit reusable launch vehicles (SSTO RLVs), such as metallic thermal protection systems, composite cryogenic fuel tanks for liquid hydrogen, the aerospike engine, autonomous (unmanned) flight control, rapid flight turn-around times through streamlined operations, and its lifting body aerodynamics.

Failures of its 21-meter wingspan and multi-lobed, composite material fuel cells during pressure testing ultimately led to the withdrawal of federal support for the program in early 2001. Lockheed Martin has conducted unrelated testing, and has had a single success after a string of failures as recently as 2009 using a 2-meter scale model.[3]

Through the use of the lifting body shape, composite multi-lobed liquid fuel tanks, and the aerospike engine, NASA and Lockheed Martin hoped to test fly a craft that would demonstrate the viability of a single-stage-to-orbit (SSTO) design. A spacecraft capable of reaching orbit in a single stage would not require external fuel tanks or boosters to reach low-earth orbit. Doing away with the need for "staging" with launch vehicles, such as with the Shuttle and the Apollo rockets, would lead to an inherently more reliable and safer space launch vehicle. While the X-33 would not approach airplane-like safety, the X-33 would attempt to demonstrate 0.997 reliability, or 3 mishaps out of 1,000 launches, which would be an order of magnitude more reliable than the Space Shuttle. The 15 planned experimental X-33 flights could only begin this statistical evaluation.

The unmanned craft would have been launched vertically from a specially designed facility constructed on Edwards Air Force Base,[4] and landed horizontally (VTHL) on a runway at the end of its mission. Initial sub-orbital test flights were planned from Edwards AFB to Dugway Proving Grounds southwest of Salt Lake City, Utah. Once those test flights were completed, further flight tests were to be conducted from Edwards AFB to Malmstrom AFB in Great Falls, Montana, to gather more complete data on aircraft heating and engine performance at higher speeds and altitudes.[citation needed]

On July 2, 1996, NASA selected Lockheed Martin Skunk Works of Palmdale, California, to design, build, and test the X-33 experimental vehicle for the RLV program. Lockheed Martin's design concept for the X-33 was selected over competing designs from Boeing and McDonnell Douglas. Boeing featured a Space Shuttle-derived design, and McDonnell Douglas featured a design based on its vertical takeoff and landing (VTVL) DC-XA test vehicle.

The X-33 was never intended to fly higher than an altitude of 100 km, nor faster than one-half of orbital velocity. Had any successful tests occurred, extrapolation would have been necessary to apply the results to a proposed orbital vehicle.[5]

Based on the X-33 experience shared with NASA, Lockheed Martin hoped to make the business case for a full-scale SSTO RLV, called VentureStar, that would be developed and operated through commercial means. The intention was that rather than operate space transport systems as it has with the Space Shuttle, NASA would instead look to private industry to operate the reusable launch vehicle and NASA would purchase launch services from the commercial launch provider. Thus, the X-33 was not only about honing space flight technologies, but also about successfully demonstrating the technology required to make a commercial reusable launch vehicle possible.

The VentureStar was to be the first commercial aircraft to fly into space. The unmanned X-33 was slated to fly 15 suborbital hops to near 75.8 km altitude.[5] It was to be launched upright like a rocket and rather than having a straight flight path it would fly diagonally up for half the flight, reaching extremely high altitudes, and then back down for the rest of the flight. The VentureStar was intended for long inter-continental flights and supposed to be in service by 2012, but this project was never funded or begun.[citation needed] 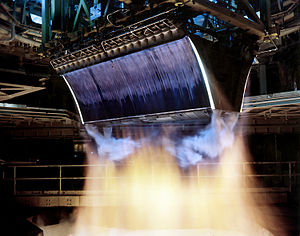 Construction of the prototype was some 85% assembled with 96% of the parts and the launch facility 100%[4] complete when the program was canceled by NASA in 2001, after a long series of technical difficulties including flight instability and excess weight.

In particular, the composite liquid hydrogen fuel tank failed during testing in November 1999. The tank was constructed of honeycomb composite walls and internal structures to reduce its weight. A lighter tank was needed for the craft to demonstrate necessary technologies for single-stage-to-orbit operations. A hydrogen fueled SSTO craft's mass fraction requires that the weight of the vehicle without fuel be 10% of the fully fueled weight. This would allow for a vehicle to fly to low earth orbit without the need for the sort of external boosters and fuel tanks used by the Space Shuttle. But, after the composite tank failed on the test stand during fueling and pressure tests, NASA came to the conclusion that the technology of the time was simply not advanced enough for such a design. While the composite tank walls themselves were lighter, the odd hydrogen tank shape resulted in complex joints increasing the total mass of the composite tank to above that of an aluminum-based tank.[7] 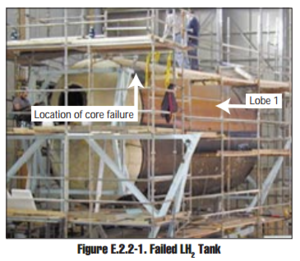 NASA had invested $922 million in the project before cancellation and Lockheed Martin a further $357 million. Due to changes in the space launch business—including the challenges faced by companies such as Globalstar, Teledesic, and Iridium and the resulting drop in the number of anticipated commercial satellite launches per year—Lockheed Martin deemed that continuing development of the X-33 privately without government support would not be profitable.

After the cancellation in 2001, engineers were able to make a working liquid oxygen tank out of carbon fiber composite.[citation needed]

On September 7, 2004, Northrop Grumman and NASA engineers unveiled a liquid hydrogen tank made of carbon fiber composite material that had demonstrated the ability for repeated fuelings and simulated launch cycles.[8] Northrop Grumman concluded that these successful tests have enabled the development and refinement of new manufacturing processes that will allow the company to build large composite tanks without an autoclave; and design and engineering development of conformal fuel tanks appropriate for use on a single-stage-to-orbit vehicle.[9]