The Lockheed Model 12 Electra Junior, more commonly known as the Lockheed 12 or L-12, is an eight-seat, six-passenger all-metal twin-engine transport aircraft of the late 1930s designed for use by small airlines, companies, and wealthy private individuals. A scaled-down version of the Lockheed Model 10 Electra, the Lockheed 12 was not popular as an airliner but was widely used as a corporate and government transport. Several were also used for testing new aviation technologies. 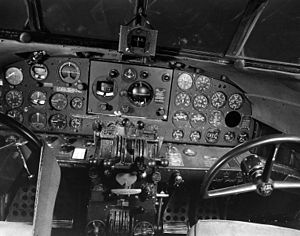 After Lockheed had introduced its 10-passenger Model 10 Electra, the company decided to develop a smaller version which would be better suited as a "feeder airliner" or a corporate executive transport.[1] At the same time, the U.S. Bureau of Air Commerce had also sensed the need for a small feeder airliner and announced a design competition for one. In order for a candidate to qualify for the competition, a prototype had to fly by June 30, 1936.[2][3]

Lockheed based its candidate, which it named the Model 12 Electra Junior, around a smaller, improved version of the Electra airframe. It would carry only six passengers and two pilots but would use the same 450 hp (340 kW) Pratt & Whitney R-985 Wasp Junior SB radial engines as the main Electra version, the 10A.[2] This made it faster than the Electra, with a top speed of 225 mph (362 km/h) at 5,000 ft (1,500 m).[2][4] Like the Electra, the Model 12 had an all-metal structure, trailing-edge wing flaps,[4] low-drag NACA engine cowlings, and two-bladed controllable-pitch propellers (later changed to constant-speed propellers).[3] It also had the Electra's twin tail fins and rudders, which were becoming a Lockheed trademark. The landing gear was a conventional tail-dragger arrangement, with the main wheels retracting backwards into the engine nacelles; as was often the case with retractable gear of the period, the wheel bottoms were left exposed in case a wheels-up emergency landing was necessary.[4]

As in the Electra and the Boeing 247, the Model 12's main wing spar passed through the passenger cabin; small steps were placed on either side of the spar to ease passenger movement.[4] The cabin had a lavatory in the rear.[4] Although the standard cabin layout was for six passengers, Lockheed also offered roomier, more luxurious layouts for corporate or private owners.[2][4]

The new transport had its first flight on June 27, 1936,[2][3] three days before the competition deadline, at 12:12 PM local time, a time deliberately chosen for the Model 12's number.[2] As it turned out, the other two competition entries, the Beechcraft Model 18 and the Barkley-Grow T8P-1, weren't ready in time for the deadline, so Lockheed won by default. The "Electra Junior" name did not catch on in the way that the original Electra's name had. Most users simply referred to the aircraft by its model number, as the Lockheed 12.[3]

The original Lockheed 12 version, with Wasp Junior engines, was the Model 12A.[4] Almost every Lockheed 12 built was a 12A or derived from the 12A. There was also a Model 12B, using 440 hp (330 kW) Wright R-975-E3 Whirlwind radials, but only two of this model were built.[3] Although Lockheed had also announced a Model 12F, powered by Wright R-760 Whirlwind seven-cylinder radials, and a Model 12M, powered by 290 hp (220 kW) Menasco six-cylinder inline engines,[5] neither of these versions reached production.

Even though the Lockheed 12 had won the government's feeder airliner competition, the airlines mostly rejected it, and very few Lockheed 12s were used as airliners.[3][6] One notable airline user was the newly renamed Continental Air Lines, which had a fleet of three Lockheed 12s that ran on its route between Denver, Colorado and El Paso, Texas in the late 1930s.[7][8][9] Another was British West Indian Airways Ltd., which flew the Lockheed 12 on Caribbean routes in the Lesser Antilles during the mid-1940s.[10][11][12]

The Lockheed 12 proved much more popular as a transport for company executives or government officials.[3] Oil and steel companies were among the major users.[3] A number were purchased as military staff transports by the United States Army Air Corps, which designated the type as the C-40, and by the United States Navy, which used the designation JO, or in one peculiar case, R3O-2. With the arrival of World War II, many civilian Lockheed 12s were requisitioned by the U.S. Army and Navy, Britain's Royal Air Force, and the Royal Canadian Air Force.[13] 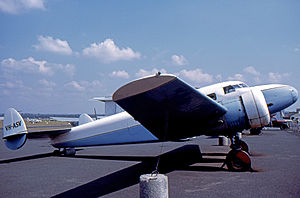 The greatest military user of the Lockheed 12 was the Royal Netherlands East Indies Army Air Force, which bought 36.[6] Sixteen of these were the Model 212, a specialized version created by Lockheed for training bomber crews, which had a .303-caliber machine gun in an unpowered, partly retractable gun turret on top of the fuselage, a second .303-caliber machine gun fixed in the nose, and bomb racks under the wing center section that could hold eight 100 lb (45 kg) bombs.[1] The other 20 aircraft were transport versions based on the Model 212.[3] 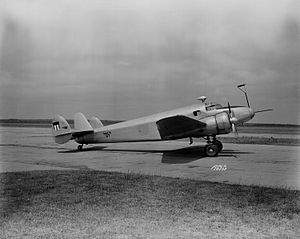 Several Lockheed 12s were used as technology testbeds. The U.S. National Advisory Committee for Aeronautics (NACA) bought two, adding a center vertical fin to each of them to improve their stability. One of the NACA Lockheed 12s was used to test "hot-wing" deicing technology, in which hot exhaust air from the engines was ducted through the wing's leading edge to prevent ice accumulation.[16][17] 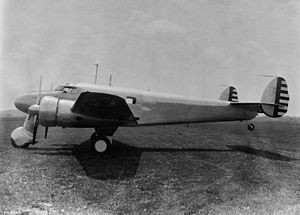 Three other Lockheed 12s were used to test tricycle landing gear.[18] These had their normal landing gear replaced by a non-retracting version with a large nosewheel and with the main wheels shifted further back on the engine nacelles.[18] (The tailwheel from the normal conventional gear was retained.[18]) The gear was non-retractable because there wasn't room within the structure to stow it in retracted position.[13] Streamlined fairings were placed on the gear to reduce drag.One of the tricycle gear Lockheed 12s went to the U.S. Navy as the XJO-3 and performed carrier landing tests on the USS Lexington to study the suitability of a twin-engined tricycle-gear aircraft for carrier operations.[17][18] Another went to the U.S. Army as the C-40B, and still another was retained by Lockheed for its own testing; both of these were eventually converted back to the normal landing gear configuration.[17][18]

Aviator Milo Burcham flew a Lockheed 12A in the 1937 Bendix Trophy Race from Burbank, California to Cleveland, Ohio.This 12A had been modified with extra fuel tanks in the cabin, allowing it to save time by making the entire 2,043-mile (3,288 km) trip non-stop.[17] The 12A came in fifth at an average speed of 184 mph (296 km/h); this was an impressive performance, since the first and fourth-place winners were both privately owned Seversky P-35 fighters.[17]

Another Lockheed 12A, owned by Republic Oil Company and named The Texan, was modified by aviator Jimmie Mattern for a round-the-world flight attempt.Mattern filled the 12A's cabin with fuel tanks and removed the cabin windows and door; the crew would enter the aircraft via a cockpit hatch.[17] The aircraft was denied a U.S. permit for the flight following the Earhart incident, however it was pressed into action September 1937 in a long range search effort for Sigizmund Levanevsky who crashed somewhere between the North pole and Barrow, Alaska. "The Texan" was outfitted as a luxury transport afterward, and lost in a hangar fire in January 1938.[19]

Lockheed built a total of 130 Lockheed 12s, ending production in 1941. With the arrival of World War II, Lockheed concentrated its production efforts on more advanced military aircraft, like the Hudson bomber and the P-38 Lightning twin-engined fighter. The Lockheed 12's market was left to the Beechcraft Model 18, thousands of which would eventually be produced.[4][6]

A number of Lockheed 12s have survived to the present day, mostly in private hands. Several of these are still flying.[20] 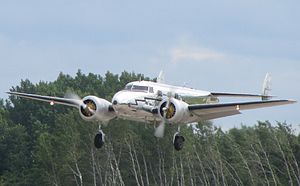 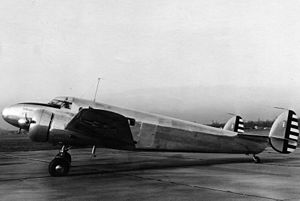 All of these were based on the Model 12A and used the same engines. 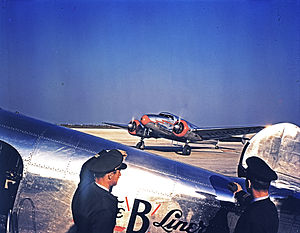 Lockheed 12A Electra Junior taxiing at Houston Hobby Airport, 1940. This aircraft belonged to the Continental Oil Company. In the foreground is a Braniff Lockheed Model 10 Electra. 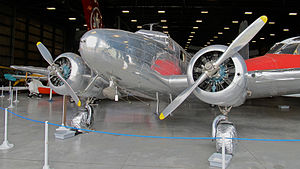 Model 12A at Canada Aviation and Space Museum

A Lockheed 12 appeared as the French airliner in the climactic final scene from the 1942 film Casablanca.[35] (The aircraft carries the Air France seahorse logo,[36] although Air France did not actually operate the type.) A "cut-out" stood in for a real Lockheed 12 in many shots.[35][N 1]

Lockheed 12s have also appeared in movies as stand-ins for the Electra 10E used by Amelia Earhart in her round-the-world flight attempt. Two played this role in the NBC 1976 TV miniseries Amelia Earhart,[35] and another did so in the 2009 movie Amelia.[37]