The Lockheed Model 14 Super Electra, more commonly known as the Lockheed 14, was a civil passenger and cargo aircraft built by the Lockheed Aircraft Corporation during the late 1930s. An outgrowth of the earlier Model 10 Electra, the Model 14 was also developed into larger, more capable civil and military versions. Neville Chamberlain flew in British Airways Lockheed 14s to Germany, and on the famous "Peace in our time" trip which resulted in the Munich Agreement, he delivered his speech beside G-AFGN.

The design, developed by a team led by Don Palmer, was a scaled-up version of the original Model 10 Electra, with passenger seating increased from 10 to 14. It was intended to compete commercially with the contemporary Douglas DC-2 and the Boeing 247. The first Model 14 flew on July 29, 1937, piloted by Marshall Headle. Early 14's used the Pratt & Whitney R-1690 Hornet engine; later the Wright R-1820 Cyclone 9 was offered as an option.

Lockheed built a total of 114 Model 14s; another 119 were built under license in Japan by the Tachikawa Aircraft Company under the designation Tachikawa Type LO Transport Aircraft Thelma. Another 121 were built by Kawasaki Aircraft Company under the designation Kawasaki Type 1 cargo transporter. The type 1 cargo's fuselage was lengthened by 1.4 m (4.6 ft), enabling the fitting of larger cargo doors.[1]

In Japan during the late 1930s and early 1940s, in common with most large economies of the time, research was being conducted into pressurised cabins for high altitude flight. In similar fashion to the Lockheed XC-35, in the United States, Tachikawa incorporated a pressurised cabin into new forward and centre fuselage sections for one of the locally built Lockheed Type LO Transport Aircraft. The resulting research aircraft was given the long designation Tachikawa-Lockheed Type-B high altitude research aircraft and the company designation Tachikawa SS-1. The first conversion was completed in May 1943, re-engined with 2x 810 kW (1,080 hp) Mitsubishi Ha-102 14-cylinder radial engines. The two conversions carried out a brief flight testing programme. 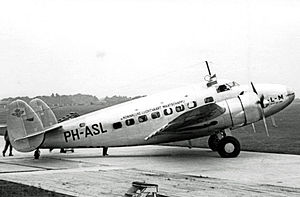 The Model 14 entered commercial service with Northwest Airlines in October 1937. Aircraft were exported for use by Aer Lingus of Ireland, British Airways Ltd later merged into BOAC of Britain and KLM of the Netherlands. The Model 14 was the basis for development of the Lockheed Hudson maritime reconnaissance and light bomber aircraft operated by the Royal Air Force, USAAF, United States Navy and many others during World War II.

In May 1938, a team of aviators of the Polish airline LOT, made up of Waclaw Makowski, director of LOT and first pilot, Zbigniew Wysiekierski, second pilot, Szymon Piskorz, mechanic and radionavigator, Alfons Rzeczewski, radio-navigator and Jerzy Krassowski, assistant, accomplished an experimental flight from the United States to Poland. This flight was carried out on board one of the aircraft bought by LOT, manufactured by Lockheed in California, a Lockheed Model 14H Super Electra (of which the Polish registration was SP-LMK.[2]). The crew took off from Burbank (Los Angeles) where these aircraft were manufactured, and after a tour of South America, flew the Atlantic from Brazil to West Africa en route to Warsaw. A poster celebrating the flight can be seen in a US Library of Congress/Matson Archive photo of the LOT/Imperial Airways Sales office in Jerusalem about 1939.[3]

The distance covered was of 15,441 mi (24,850 km; 13,418 nmi). They flew via the Central American cities of Mazatlan, Mexico City, Guatemala, and Panama, then via the South American cities of Lima, Peru; Santiago, Chile; Buenos Aires, Argentina; and Rio de Janeiro and Natal in Brazil. They flew across the South Atlantic to Dakar, Senegal, in Africa and then to Casablanca, Tunis, and then on to Rome, Italy. The final leg of the flight brought them to Warszaw, Poland. The flying time was 85 hours between 13 May and 5 June. The overflight of the Atlantic - from Natal to Dakar - lasted 11 hours and 10 minutes (1,908 mi/3,070 km). This feat by Polish aviators marked the history of air communication on a world level. (Prior to this flight airliners were delivered across the Atlantic as deck cargo on ships [4]). 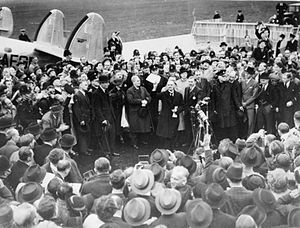 British Airways G-AFGN featured peripherally in one of the most significant events of its time, the 1938 signing of the Munich Agreement

Data from Lockheed Aircraft since 1913[5]