It was closed in June 1979 by the Air Force, and turned over to the Federal Aviation Administration (FAA). The FAA moved to a new site near Lua error in Module:Coordinates at line 668: callParserFunction: function "#coordinates" was not found. near Dansville, New York as part of the Joint Surveillance System (JSS), designated by NORAD as Eastern Air Defense Sector (EADS) Ground Equipment Facility J-02.

Lockport Air Force Station was part of the last batch of twenty-three radar stations constructed as part of the Air Defense Command permanent radar network. It has its origins at Fort Niagara, NY, when a temporary "Lashup" radar station was established there in August 1950. The 763d Aircraft Control and Warning Squadron was activated with a World War II AN/CPS-6 radar set at Fort Niagara, the site being designated (L-19).

The 763d AC&W squadron moved to its permanent site at Shawnee, NY in September 1951 after enough construction was finished for beneficial occupancy, and initially the station functioned as a Ground-Control Intercept (GCI) and warning station. As a GCI station, the squadron's role was to guide interceptor aircraft toward unidentified intruders picked up on the unit's radar scopes. The 763d initially began operating a pair of AN/CPS-6B radars, which it operated throughout the 1950s.

During 1959 Lockport AFS joined the Semi Automatic Ground Environment (SAGE) system, initially feeding data to DC-03 at Syracuse AFS, New York. After joining, the squadron was re-designated as the 763d Radar Squadron (SAGE) on 1 February 1959. The radar squadron provided information 24/7 the SAGE Direction Center where it was analyzed to determine range, direction altitude speed and whether or not aircraft were friendly or hostile.

Lockport started operating an AN/FPS-7 radar in 1960. Height-finding chores were handled at that time by a pair of AN/FPS-6s. During 1962 United States Army Nike operations ended, and the Air Force added an AN/FPS-26 to replace one of the AN/FPS-7 height-finder radars.

Over the years, the equipment at the station was upgraded or modified to improve the efficiency and accuracy of the information gathered by the radars. Routine operations continued until 29 June 1979 when the 763rd was inactivated and Lockport AFS was closed as part of the phaseout of Aerospace Defense Command. Today the facility is being redeveloped for commercial uses. A few USAF buildings remain in deteriorated condition. 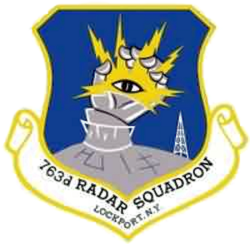 Emblem of the 763d Radar Squadron