Locri is a town and comune (municipality) in the province of Reggio Calabria, Calabria, southern Italy. The name derives from the ancient Greek town Locris.

Epizephyrian Locris (from Greek Ἐπιζεφύριοι Λοκροί; from ἐπί epi, "on", Ζέφυρος (Zephyros, "West Wind, and the plural of Λοκρός, Lokros, "a Locrian," thus "The Locrians upon the West Wind").[2] was founded about 680 BC on the Italian shore of the Ionian Sea, near modern Capo Zefirio, by the Locrians, apparently by Opuntii (East Locrians) from the city of Opus, but including Ozolae (West Locrians) and Lacedaemonians. Its Latin name, Locri, is the plural of the Latin Locrus, which was used both to mean an inhabitant of Locris and the eponymous ancestor of the Locrians. Strabo suggests that it was the Ozolae who were the main founders. 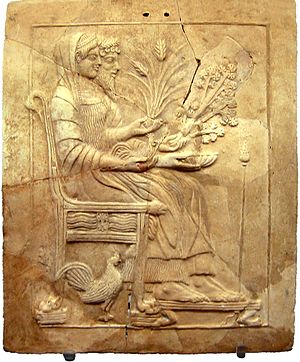 Pinax from Locris: Persephone and Hades sitting on the throne

Due to fierce winds at an original settlement, the settlers moved to the present site. After a century, a defensive wall was built. Outside the city there are several necropoleis, some of which are very large.

Epizephyrian Locris was one of the cities of Magna Graecia. Its renowned lawgiver Zaleucus decreed that anyone who proposed a change in the laws should do so with a noose about their neck, with which they should be hanged if the amendment did not pass. Plato called it "The flower of Italy", due to the local peoples' characteristics. Locris was the site of two great sanctuaries, that of Persephone — here worshipped as the protector of fertile marriage — and of Aphrodite.[3]

In the early centuries Locris was allied with Sparta, and later with Syracuse. It founded two colonies of its own, Hipponion and Medma. During the Pyrrhic Wars (280-275 BC) fought between Pyrrhus of Epirus and Rome, Locris accepted a Roman garrison and fought against the Epirote king. However, the city changed sides numerous times during the war. Bronze tablets from the treasury of its Olympeum, a temple to Zeus, record payments to a 'king', generally thought to be Pyrrhus. Despite this, Pyrrhus plundered the temple of Persephone at Locris before his return to Epirus, an event which would live on in the memory of the Greeks of Italy. At the end of the war, perhaps to allay fears about its loyalty, Locris minted coins depicting a seated Rome being crowned by 'Pistis', a goddess personifying good faith and loyalty, and returned to the Roman fold.

The city was abandoned in the fifth century AD. The town was finally destroyed by the Saracens in 915. The survivors fled inland about 10 kilometres (6 mi) to the town Gerace on the slopes of the Aspromonte.

After 1850 Gerace developed along the coast, forming a new centre Gerace Marina, to house new public buildings and a railway station. In 1934 it changed its name in Locri, which is now the administrative centre of the Locride area.

Locri is a hotbed of the 'Ndrangheta, which is known to be a Calabrian criminal organization. It is home to several clans such as the Cataldo and Cordì families. The town made headlines worldwide when the Vice President of the Regional Assembly of Calabria, Francesco Fortugno, was gunned down with five bullets in front of dozens of bystanders as he cast his vote at the primary elections on October 16, 2005.[4]

In protest, students spontaneously took to the streets the day after Fortugno's killing. One banner read, E adesso ammazzateci tutti (And Now Kill Us All), and many carried white sheets as a symbol of protest against the omertà, or the law of silence, that protects the mafia.[5] The killing triggered the birth of the Ammazzateci tutti movement against the 'Ndrangheta. The movement is also known as "Ragazzi di Locri" (Kids from Locri). The funeral of Fortugno on October 19, 2005, was attended by 8,000 people.

In the first half of the fifth century BC, the Locrians demolished their archaic temple and rebuilt a new temple in the Ionic style. The temple was designed by Syracusan architects around 470 BC, based on the idea of Hiero I of Syracuse.

The new temple occupies the same place as the previous one but it has a different orientation. The temple was destroyed in the 11th century. The dimensions of the temple were 45.5 by 19.8 metres (149 by 65 ft). The cella is free of supports on the central axes. The pronaos had two columns. The temple has seventeen Ionic columns on the long side, and six on the front. The height of the temple was 12 metres (39 ft).

The theatre was built in the fourth century BC not far from the ancient city, in the Contrada Pirettina, taking advantage of a hillside slope. The original structure had space for more than 4,500 people; now only the central part of the theatre is visible.

Part of the Cavea was cut into the rocks. Each plane was divided in 7 wedges between 6 scales. A horizontal separation divided the upper theater from the lower theatre.