Locronan (Lokorn in Breton) is a commune in the Finistère department of Brittany in north-western France, with a population of 800.

Locronan is a member of the Les Plus Beaux Villages de France ("The most beautiful villages of France") association.[1]

The village's name means the "hermitage of Ronan", from the Breton lok which means hermitage, and after the eponymous founder Saint Ronan. It has previously been known as Saint-René-du-Bois.

Saint Ronan is greatly venerated in Brittany. He was an Irish Christian missionary of the 6th century who came to the region to teach the people. As his association with Locronan is close, some of his relics are kept in the parish church. 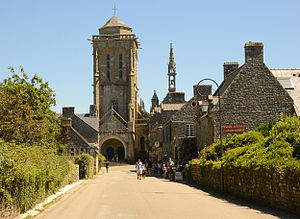 The St Ronan church at Locronan.

Locronan is a small town built at the foot of a hill. It was granted town status in 1505 by Anne of Brittany, who went there on a pilgrimage.

Since the 15th century, hemp has naturally grown in the area. It was cultivated and processed in a hemp industry in the town at the time, and it was widely used. The town was quite prosperous. Its hemp was exported internationally, as it was used for rigging the ships, both commercial and military, that operated from Brittany's many ports. The Saint Ronan church was built in this period, as well as the small chapel of Penity.

Inhabitants of Locronan are called in French Locronanais.

The municipality launched a linguistic plan through Ya d'ar brezhoneg on November 23, 2007 to revive the Breton language.

In the intervening five years, the Petite Troménie is held on the second Sunday in July. It is based in the town and church of Locronan. These are among the major pardons or ceremonies of the traditional Breton festal calendar.

Locronan has been used as a setting in films: