listen); Lombard: Lòd) is a city and comune in Lombardy, northern Italy, on the right bank of the River Adda. It is the capital of the province of Lodi. 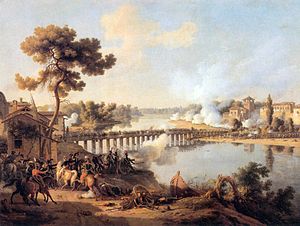 The Battle of Lodi, by Louis-François, Baron Lejeune.

Lodi was a Celtic village; in Roman times it was called in Latin Laus Pompeia (probably in honour of the consul Gnaeus Pompeius Strabo) and was known also because its position allowed many Gauls of Gallia Cisalpina to obtain Roman citizenship. It was in an important position where a vital Roman road crossed the River Adda.

Lodi became the see of a diocese in the 3rd century and its first bishop, Saint Bassianus (San Bassiano) is the patron saint of the town.

A free commune around 1000, it fiercely resisted the Milanese, who destroyed it in 1111. The old town corresponds to the modern Lodi Vecchio. Frederick Barbarossa rebuilt it on its current location in 1158.

Starting from 1220, the Lodigiani (inhabitants of Lodi) spent some decades in realising an important work of hydraulic engineering: a system of miles and miles of artificial rivers and channels (called Consorzio di Muzza) was created in order to give water to the countryside, turning some arid areas into one of the most important agricultural areas of the region, even up to today.

Starting from the 14th century Lodi was ruled by the Visconti family, who built a castle here. In 1423, the antipope John XXIII launched the bull by which he convened the Council of Constance from the Duomo of Lodi. The council would mark the end of the Great Schism.

In 1454 representatives from all the regional states of Italy met in Lodi to sign the treaty known as the peace of Lodi, by which they intended to work in the direction of Italian unification, but this peace lasted only 40 years.

The town was then ruled by the Sforza family, France, Spain and Austria. In 1786 it became the eponymous capital of a province that between 1815 and 1859 would have included Crema.

On 10 May 1796, in the first major battle of his career as a general, the young Napoleon Bonaparte defeated the Austrians in the Battle of Lodi. In the second half of the 19th century, Lodi began to expand outside the city walls, boosted by economic expansion and the construction of a network of railway lines that followed the reunification of Italy. 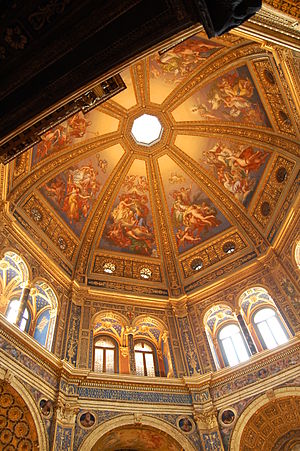 Church of the Beata Vergine Incoronata (view of the interior),

In 1945, the Italian petrol company Agip, directed by Enrico Mattei, started extracting methane from its fields, and Lodi was the first Italian town with a regular domestic gas service.