From Infogalactic: the planetary knowledge core
Jump to: navigation, search
This article is about the geologic material. For the statistical technique, see local regression. 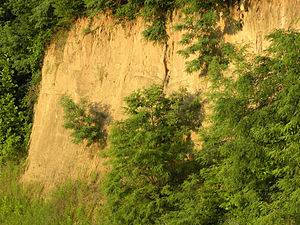 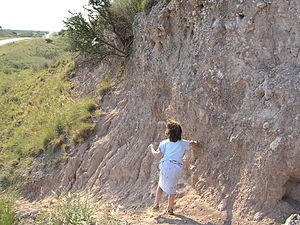 An outcrop of loess in Patagonia

Loess is an aeolian sediment formed by the accumulation of wind-blown silt, typically in the 20–50 micrometer size range, twenty percent or less clay and the balance equal parts sand and silt[3] that are loosely cemented by calcium carbonate. It is usually homogeneous and highly porous and is traversed by vertical capillaries that permit the sediment to fracture and form vertical bluffs.

The word loess, with connotations of origin by wind-deposited accumulation, came into English from German Löss ([lœs]), which can be traced back to Swiss German and is cognate with the English word loose and the German word los.[4] It was first applied to Rhine River valley loess about 1821.[5][6] 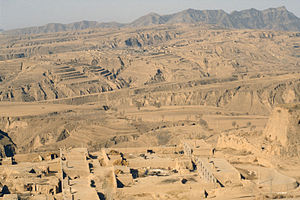 Loess is homogeneous, porous, friable, pale yellow or buff, slightly coherent, typically non-stratified and often calcareous. Loess grains are angular with little polishing or rounding and composed of crystals of quartz, feldspar, mica and other minerals. Loess can be described as a rich, dust-like soil.[7]

Loess often stands in either steep or vertical faces.[8] Because the grains are angular, loess will often stand in banks for many years without slumping. This soil has a characteristic called vertical cleavage which makes it easily excavated to form cave dwellings, a popular method of making human habitations in some parts of China. Loess will erode very readily.

In several areas of the world, loess ridges have formed that are aligned with the prevailing winds during the last glacial maximum. These are called paha ridges in America and greda ridges in Europe. The form of these loess dunes has been explained by a combination of wind and tundra conditions.

Loess comes from the German Löss or Löß, and ultimately from Alemannic lösch meaning loose as named by peasants and masons along the Rhine Valley.

The term "Löß" was first described in Central Europe by Karl Cäsar von Leonhard (1823-1824)[9] who reported yellowish brown, silty deposits along the Rhine valley near Heidelberg.[1] Charles Lyell (1834) brought this term into widespread usage by observing similarities between loess and loess derivatives along the loess bluffs in the Rhine and Mississippi.[1] At that time it was thought that the yellowish brown silt-rich sediment was of fluvial origin being deposited by the large rivers.[1] It wasn't until the end of the 19th century that the aeolian origin of loess was recognized (Virlet D'Aoust 1857),[10] especially the convincing observations of loess in China by Ferdinand von Richthofen (1878).[1][11] A tremendous number of papers have been published since then, focusing on the formation of loess and on loess/palaeosol (older soil buried under deposits) sequences as archives of climate and environment change.[1] These water conservation works were carried out extensively in China and the research of Loess in China has been continued since 1954. (Liu TS, Loess and the environment)

Much effort was put into the setting up of regional and local loess stratigraphies and their correlation (Kukla 1970, 1975, 1977).[12][13][14] But even the chronostratigraphical position of the last interglacial soil correlating to marine isotope substage 5e has been a matter of debate, owing to the lack of robust and reliable numerical dating, as summarized for example in Zöller et al. (1994)[15] and Frechen, Horváth & Gábris (1997)[16] for the Austrian and Hungarian loess stratigraphy, respectively.[1]

Since the 1980s, thermoluminescence (TL), optically stimulated luminescence (OSL) and infrared stimulated luminescence (IRSL) dating are available providing the possibility for dating the time of loess (dust) deposition, i.e. the time elapsed since the last exposure of the mineral grains to daylight.[1] During the past decade, luminescence dating has significantly improved by new methodological improvements, especially the development of single aliquot regenerative (SAR) protocols (Murray & Wintle 2000)[17] resulting in reliable ages (or age estimates) with an accuracy of up to 5 and 10% for the last glacial record.[1] More recently, luminescence dating has also become a robust dating technique for penultimate and antepenultimate glacial loess (e.g. Thiel et al. 2011,[18] Schmidt et al. 2011)[19] allowing for a reliable correlation of loess/palaeosol sequences for at least the last two interglacial/glacial cycles throughout Europe and the Northern Hemisphere (Frechen 2011).[1][20] Furthermore, the numerical dating provides the basis for quantitative loess research applying more sophisticated methods to determine and understand high-resolution proxy data, such as the palaeodust content of the atmosphere, variations of the atmospheric circulation patterns and wind systems, palaeoprecipitation and palaeotemperature.[1]

According to Pye (1995),[21] four fundamental requirements are necessary for the formation of loess: a dust source, adequate wind energy to transport the dust, a suitable accumulation area, and a sufficient amount of time.[1]

Periglacial (Glacial) loess is derived from the floodplains of glacial braided rivers that carried large volumes of glacial meltwater and sediments from the annual melting of continental icesheets and mountain icecaps during the spring and summer. During the autumn and winter, when melting of the icesheets and icecaps ceased, the flow of meltwater down these rivers either ceased or was greatly reduced. As a consequence, large parts of the formerly submerged and unvegetated floodplains of these braided rivers dried out and were exposed to the wind. Because these floodplains consist of sediment containing a high content of glacially ground flour-like silt and clay, they were highly susceptible to winnowing of their silts and clays by the wind. Once entrained by the wind, particles were then deposited downwind. The loess deposits found along both sides of the Mississippi River Alluvial Valley are a classic example of periglacial loess.[22][23]

During the Quaternary, loess and loess-like sediments were formed in periglacial environments on mid-continental shield areas in Europe and Siberia, on the margins of high mountain ranges like in Tajikistan and on semi-arid margins of some lowland deserts like in China.[1]

Some types of nonglacial loess are:[24]

Loess tends to develop into very rich soils. Under appropriate climatic conditions, it is some of the most agriculturally productive terrain in the world.[27]

Soils underlain by loess tend to be excessively drained. The fine grains weather rapidly due to their large surface area, making soils derived from loess very rich. One theory states that the fertility of loess soils is due largely to cation exchange capacity (the ability of plants to absorb nutrients from the soil) and porosity (the air-filled space in the soil). The fertility of loess is not due to organic matter content, which tends to be rather low, unlike tropical soils which derive their fertility almost wholly from organic matter.

Even well managed loess farmland can experience dramatic erosion of well over 2.5 kg /m2 per year. In China the loess deposits which give the Yellow River its color have been farmed and have produced phenomenal yields for over one thousand years. Winds pick up loess particles, contributing to the Asian Dust pollution problem. The largest deposit of loess in the United States, the Loess Hills along the border of Iowa and Nebraska, has survived intensive farming and poor farming practices. For almost 150 years this loess deposit was farmed with mouldboard ploughs and fall tilled, both intensely erosive. At times it suffered erosion rates of over 10 kilograms per square meter per year. Today this loess deposit is worked as low till or no till in all areas and is aggressively terraced.

The Loess Plateau (simplified Chinese: 黄土高原; traditional Chinese: 黃土高原; pinyin: huángtǔ gāoyuán), also known as the Huangtu Plateau, is a plateau that covers an area of some 640,000 km² in the upper and middle of China's Yellow River and China proper. The Yellow River was so named because the loess forming its banks gave a yellowish tint to the water.[28] The soil of this region has been called the "most highly erodible soil on earth".[29] The Loess Plateau and its dusty soil cover almost all of Shanxi, Shaanxi, and Gansu provinces, the Ningxia Hui Autonomous Region, and parts of others. 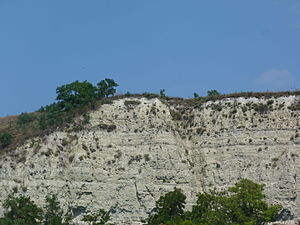 Hungary has several areas that are covered by loess. At locations such as Dunaújváros and Balatonakarattya, loess walls are exposed as loess reefs. Similar formations exist in Romania (Wallachian Plain), in Serbia (in province of Vojvodina, e.g. Titelski Breg), in Bulgaria on the south bank of the Danube and in Croatia (island of Susak).

Central Belgium is covered by thick loess stacks. Neanderthal artifacts were found within the soils between the loess layers of the Veldwezelt-Hezerwater. Also South Limburg, Netherlands, is partially covered with loess.

Map showing the distribution of loess in North America.[2]

The Loess Hills of Iowa owe their fertility to the prairie topsoils built by 10,000 years of post-glacial accumulation of organic-rich humus as a consequence of a persistent grassland biome. When the valuable A-horizon topsoil is eroded or degraded, the underlying loess soil is infertile, and requires the addition of fertilizer in order to support agriculture.

Loess soil forms sharp hills close to the Mississippi River and Yazoo River in western Mississippi north and south of Vicksburg. These deposits are more than 30 m thick (comparable to those in Iowa) immediately above the river valleys, to which they are sub-parallel, and thin to trace thickness within 40 km to the east, making up ecoregion #74 of the List of ecoregions in the United States (EPA). Streams and gulleys are incised very deeply and sharply between the linear loess ridges, making topography very important in the conduct of military operations for the Vicksburg Campaign.

The Palouse Hills of eastern Washington and northern Idaho is a fertile agricultural region based on loess deposits.

Glacial loess from the Matanuska Glacier blown into Matanuska Valley created the fertile soil conditions that motivated the Matanuska Colony resettlement experiment in Alaska during the Great Depression.

Crowley's Ridge in Arkansas is a natural loess accumulation point.

This article incorporates CC-BY-3.0 text from the reference[1]